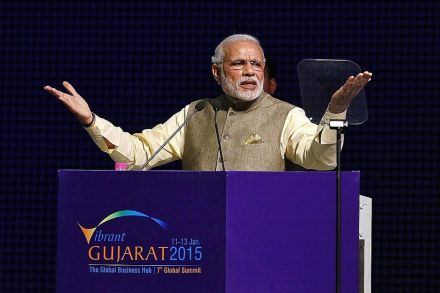 Mr Modi affirmed the government will create a policy environment that is predictable, transparent and fair and promised to “hold your hands whenever you need us”. PHOTO: AFP

The Vibrant Gujarat series of biennial summits was the brainchild of Narendra Modi, the former chief minister of Gujarat. Started in 2003, it was conceived as an event to bring investments to Gujarat and make the state the premier investment destination in India by showcasing its businessfriendly environment.

Mr Modi’s record of running a clean state government and its economic performance and infrastructural development propelled him to the prime minister’s position in 2014 with a very large majority, a situation not seen in India for decades. His management record speaks for itself. Gujarat accounts for about 6 per cent of the Indian land mass and around 5 per cent of its population. However, its economic performance under Mr Modi was stellar. The state now accounts for 7.6 per cent of the country’s GDP, about 10 per cent of national employment and a whopping 22 per cent of Indian exports. Under his leadership between 2001 and 2012, the state averaged annual GDP growth of 10 per cent, and almost consistently well above India’s GDP growth rates. When he took over in 1991, Gujarat was an electricity deficient state but it is now a power surplus state, with all its 18,000 villages electrified.

Gujarat has very arid climate which caused serious water scarcity during nonmonsoon months. Thanks to major development projects like the Sardar Sarovar and completion of a statewide water grid, water scarcity has now become a thing of the past. Not surprisingly, the Indian voters wanted the Modi magic to work over the entire country.

This year’s Vibrant Gujarat Summit in January effectively transformed itself from a state to a national event. Gone were the speeches by mostly Indian dignitaries praising the Gujarat model of development and soliciting investments for the state. It has become a national event parading a truly national and international cast of important political and business leaders and heads of international organisations.
For the first six Vibrant Gujarat Summits, Mr Modi had invited India’s prime ministers to inaugurate them but none had accepted his invitations. With Mr Modi becoming the prime minister, it was a foregone conclusion that he would take a major part in the summit. He gave it the necessary gravitas so that it could become a global event.

In inaugurating the 2015 summit, Gujarat’s Chief Minister Anandiben Patel broke with the normal protocol and spoke in English for an international audience. She urged the audience to “earn for your development” and also “spend for social betterment” that the “Indian culture teaches us”.

Mr Modi affirmed that the Indian government will create a policy environment that is predictable, transparent and fair and promised to “hold your hands whenever you need us”.

World Bank president Jim Yong Kim noted the country needs “effective collaboration, which includes iconic projects like the Green Revolution, White Revolution, roads, bridges and rail network that will link this vast land” and measures to improve health conditions. Noting that some 500 million Indians are still living in absolute poverty, he said that in the next decade India could take the lead in the mission to end global poverty.

The person who stole the show was Prime Minister Tshering Tobgay of Bhutan. He noted: “When Gujarat vibrates, its vibrations quickly spread through India to the rest of the world and that includes my country even though it is guarded by the mighty Himalayas.” Noting that Bhutan’s GDP is only US$1.7 billion, he brought the house down saying “forget competing with other countries, GDP of my country is less than the personal wealth of many of you in this room”. He declared that “Bhutan is open for business but only for clean, green and sustainable businesses like hydropower and organic agriculture”.

The inaugural session with 19 distinguished speakers lasted over three hours. This made US Secretary of State John Kerry to quip that “almost everything there is to say has been said but not everyone has said it!”

The success of the new Vibrant Gujarat Summit can be gleaned from some of the statistics from the event. Overall, it attracted some 25,000 participants, of whom 10 per cent came from 110 countries. A total of 21,304 memorandums of understanding (MOU) were signed, by far the highest in the series. This compares to 17,719 MOUs signed in 2013. The chief minister announced that the total value of the MOUs came to 25 trillion rupees (S$552.4 billion). To put this in perspective, it is more than three times Gujarat’s 201314 GDP, and nearly one quarter of India’s current annual GDP. In addition, strategic partnerships with 1,225 organisations were signed.

Like in all such events, intents of many private and public sector organisations do not get transformed into reality. However, even if 10 per cent of the MOUs become reality, it would still mean increasing Gujarat’s GDP by about onethird, a no mean feat.

The chief minister announced that a committee including the state chief secretary will monitor the implementation and progress of the MOUs and that she herself will head the committee. It will ensure that there are no issues in terms of policies, regulations and other constraints for the implementation of the projects, and she will check their progress every three months.

For a scientist and policy adviser, one of the most attractive parts of the Vibrant Gujarat Summit was the seven thematic seminars. I attended the one on water security, climate change and sustainable development. The organiser of this fourhour seminar, principal secretary Rajiv Gupta, did a remarkable job bringing together 10 of the world’s leading experts from academia including a Nobel laureate, heads of international organisations and captains of industries. It was truly excellent, and the presentations and discussions were of a a high level. The hall was full all the time with more than 500 participants. By all accounts, this seminar was an outstanding success. If in the future, Gujarat can organise six to 10 such highly informative and productive seminars, the event will be worth attending for such seminars alone.

A major problem India now faces is how to effectively utilise its 500 million strong workforce that is growing annually by 12 million new jobseekers. Sadly, most of this workforce is of low skill or possess no skill. Nearly half of them work in the agricultural sector that contributes only about 15 per cent of GDP. Ensuring the country’s workers have decent jobs which would enable them to have a reasonably good standard of living is of paramount importance for the country’s economic and social stability. Events like Vibrant Gujarat will go a long way towards achieving this national requirement.

A major problem in India is the constraints that businesses face to establish themselves, including red tape, lack of basic infrastructure, corruption at most levels, absence of accountability and transparency, and the continuation of the licenceraj which has become synonymous with corruption. The World Bank currently ranks India 142 out of 189 countries for “ease of doing business”. Mr Modi wants India to be within the first 50 in two short years. It is a worthy goal that will not be easy to achieve.

Gujarat has made remarkable progress in this area, but most Indian states and the central government are lagging behind. Fortunately, Mr Modi is a strong, intelligent and pragmatic leader and he is well aware of the Herculean tasks the country is facing to make it truly businessfriendly and attract foreign direct investment. For the CEO’s conclave, he addressed the issue directly and concluded his speech aptly by quoting Robert Frost:

“The woods are lovely, dark and deep,
But I have promises to keep, And miles to go before I sleep.”

The writer is Distinguished Visiting Professor at the Lee Kuan Yew School of Public Policy, Singapore, and cofounder of the Third World Centre for Water Management, Mexico.