The Marina Barrage, a dream 20 years in the making

An iconic landmark, a symbol of the city-state’s success in water management, the Marina Barrage is a culmination of decades of visionary foresight, planning and execution, say Cecilia Tortajada and Asit K Biswas. 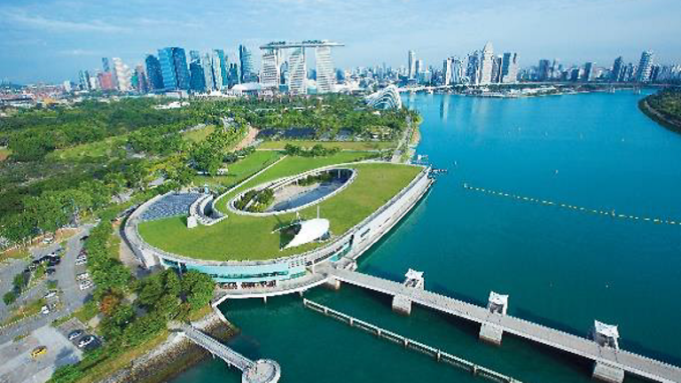 The Marina Barrage has become an iconic landmark and a popular social space for many Singaporeans.

Clean, green, open, free and accessible to all Singaporeans and visitors, built at a cost of S$226 million, this impressive infrastructure, with a breath-taking view of the sea, was completed only in four years in 2008.

This year marks the 10th anniversary of the Barrage. Its objectives range from the functional, like flood control, to the strategic, of ensuring water security, and the symbolic, in providing a landmark waterfront attraction. It has received 16 million visitors since it was built, almost three times Singapore’s entire population.

It is the result of visionary planning at the highest political level, and painstaking planning and implementation by scores of officers at PUB, Singapore’s national water agency.

20 YEARS IN THE MAKING

The city-state has made consistent global mark in terms of long-term water resource policy, planning, management, development, governance and technology.

This has not been easy. It has required generations of very competent engineers regularly developing innovative alternatives to address numerous challenges Singapore has faced since independence.

These includes the need to provide clean water for all uses amidst rapid economic development, population growth, high urbanisation and growing expectations and aspirations. This has been achieved in spite of the lack of space to store rainfall, erratic weather patterns and impacts of climate change.

Marina Bay, as a source of water was first considered by the government during the 1980s. Only after 1987 when Singapore River was cleaned up, did founding Prime Minister Lee Kuan Yew challenge PUB to construct a freshwater lake in the Bay. 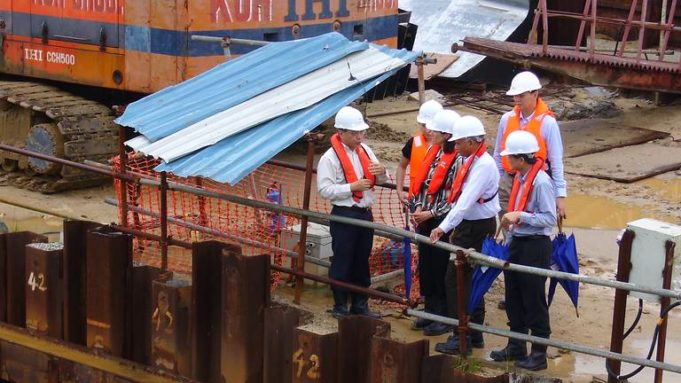 The authors, Cecilia Tortajada and Asit K Biswas, being briefed by PUB officials at the construction site of Marina Barrage in January 2007 (Photo: PUB)

The Barrage is across the Marina Channel at the confluence of Kallang, Geylang and Singapore rivers, and Rochor and Stamford canals. The objective is to collect and store water from the most densely populated areas of the island, a task made trickier by pollution then.

Water flowing into the reservoir had to be clean, meaning policies, legislation and stringent monitoring processes must be in place to protect water quality, lest Singapore end up with a stinking septic water body instead of a reservoir with clean water, enjoyed by everyone.

The Barrage has managed the risk of flooding, in discharging excess storm water into the sea. Many forget that the Marina Channel used to be directly connected to the sea.

During heavy rains and high tides, low-lying areas in the vicinity including Chinatown, Boat Quay, Jalan Besar and Geylang, were prone to flooding, some of which flooded after extreme high tides even in the absence of rain.

The Barrage’s role in providing more drinkable water has gotten a recent boost. In 2020, a new desalination plant will be built at Marina East, which will treat freshwater from Marina Reservoir and salty water from the sea. 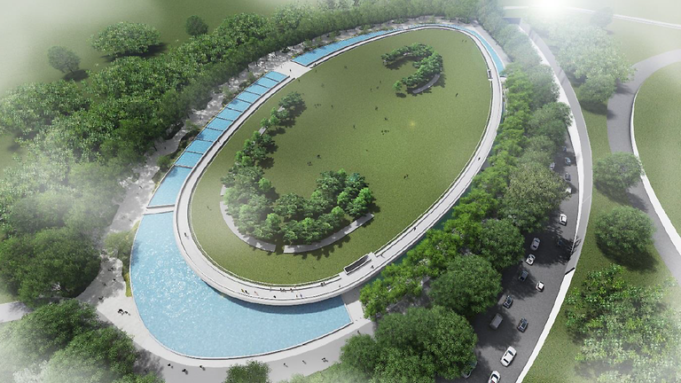 We visited Marina Barrage in January 2007, when it was under construction. What was most impressive was its holistic planning and strong execution.

The project did not look to traditional flood control or water supply systems alone. Instead, it planned at the catchment level, to maximise the collection of water, covering 10,000 ha, and treat it so that Marina reservoir would have clean water.

In Gujarat, India, Kalpasar project has been under planning for some two decades.

The objective is to build a dam across the Gulf of Khambat and create a reservoir for domestic, industrial and irrigation purposes.

Some S$50 million have been spent but construction will take at least another 10 years, putting the project at severe risk of cost escalation and potentially jeopardising its completion.

Some have asked how the Marina Barrage can contribute to water security in the future in the face of climate variability and change.

Our view is that PUB is a remarkable institution that experiments continuously, contributing to numerous innovations. Its holistic approach to water management looking at Singapore’s reservoir system in totality, exemplified by the barrage, puts Singapore in a good position to tackle future water challenges.

Marina Barrage, being part of a reservoir integration scheme, is able to deal with heavy rains, because it can transfer extra water to the much larger Upper Pierce Reservoir. 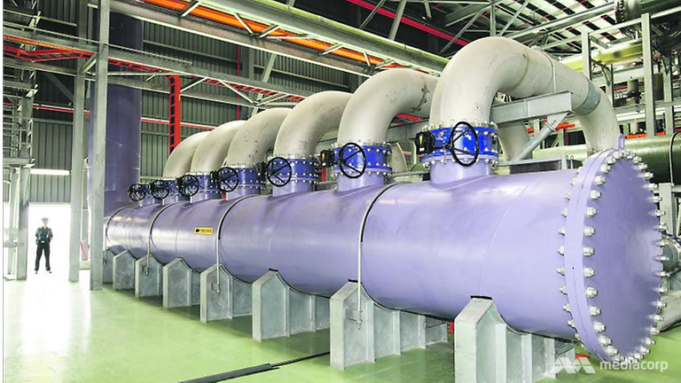 This holistic management, which includes NEWater and desalination, contributes to Singapore’s water security.

Indeed, apart from ensuring unimpeded supply to clean, drinkable water, it is absolutely critical that Singapore manages water demand, and enhances the efficiencies of commercial and industrial sectors in their water usage.

Singapore’s Four National Taps strategy, traditionally focused on safeguarding water from local catchments, importing water, and using NEWater and desalinated water, needs a fifth tap – to manage water demand, and ingrain a culture of water conservation in the national psyche. There will never be enough water if it is not used prudently.

Per capita daily water use in Singapore is 143 litres, somewhat similar to England and Wales at 142 litres. The independent water regulator for England and Wales has suggested this demand be reduced to 60 to 70 litres per day. Citizens of Charleroi, Belgium, used only 71 litres each day in 2016.

In our view, Singapore should consider reducing per capita daily use to 70 to 90 litres by at least 2050 – a target made eminently through the employment of economic, technological and behavioural change instruments. 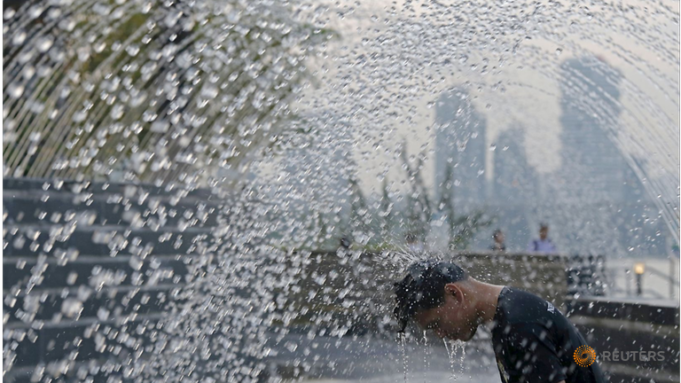 A youth cools himself off at a water fountain near Marina Bay in Singapore. (File photo: Reuters)

Joan Ho, in her book Tidal Fortunes: A Story of Change, refers to a TV interview by late Prime Minister Lee Kuan Yew, where he talked about the Marina Barrage, still an idea at that time:

“In twenty years, it is possible that there could be breakthroughs in technologies, both anti-pollution and filtration, and then we dam up or put a barrage at the mouth of the Marina – the neck that joins the sea – and we will have a huge freshwater lake”.

“The advantages are obvious. One: A large strategic reserve of water – fresh water – for use in emergency: a drought, or some such period. Second, it will help flood control because at high tides – exceptional high tides – which happen about two periods a year, if they coincide with heavy rain, the three rivers and canals will flood parts of the city.”

“Now with the barrage, we can control the flooding. And with the barrage, the water level can be held steady. We need never [sic] have low tides. So the recreational use and scenic effect would be greatly improved. And it is possible in another twenty years, and therefore, we should keep on improving the quality of water.”

This year marks the 10th anniversary of that which was once a dream.

This article was first published by CHANNEL NEWS ASIA, November 10, 2018.