Tackling the challenges of sponge cities 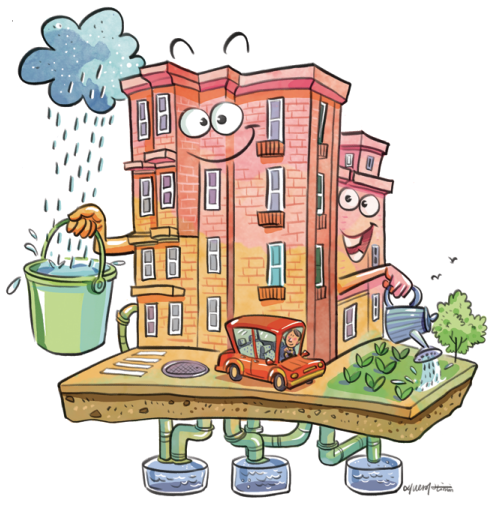 From the staggering population migration to the multi-lane traffic jams, China’s rapid urbanization has captured global attention. But much of what threatens the sustainability of China’s urbanization is not above ground but under it.

In particular, the over-extraction of groundwater, the degradation of water bodies and wetlands, and urban flooding are forcing Chinese cities to address a complex puzzle: The surface development in cities leaves little opportunity for natural systems to mitigate rainwater runoff and replenish groundwater. The result is a vicious circle of investment in rainwater infrastructure and new land development that exacerbates the runoff problem.

China’s sponge city initiative aims to arrest this cycle through permeable surfaces and “green infrastructure”. But the initiative faces three challenges: already polluted groundwater, a focus on spot-level solutions, and the constrained fiscal capacity of local governments. The sponge city initiative, a joint effort of three ministries－housing and rural-urban development, finance, and water resources－has ambitious goals: by 2020, 80 percent of urban areas should absorb and reuse at least 70 percent of rainwater.

First mentioned by President Xi Jinping in 2013 and officially launched in 2015 in 16 cities, the initiative approaches urban water sustainability from two angles: it reduces the intensity of rainwater runoff and distributes absorption more evenly; and the resulting groundwater replenishment increases the supply of reusable water feeding into existing systems (channeled runoff is often treated then discharged, removing it from usage circulation).

The pilot case of Lingang, a new town project on the coast near Pudong, Shanghai, illustrates typical sponge city measures: rooftops covered with plants, scenic pools and wetlands for rainwater storage, and permeable pavement that stores runoff water and allows evaporation for temperature moderation. Runoff water is also stored in a large underground reservoir and purified through natural vegetation. With ambitions to be China’s largest sponge city project, the Lingang local government has invested $119 million in retrofits and innovations that are a model for the majority of Chinese cities lacking modern water infrastructure.

Other cities have made notable efforts as well. Sponge city projects in Xiamen and Wuhan have performed effectively in heavy rainstorms. Such cases reflect the progress of the sponge city initiative.

But despite these gains, China faces three challenges. First, groundwater pollution is reaching alarming levels, with more than half of China’s shallow and deep groundwater deemed non-potable.

Rainwater－responsible for more than 50 percent of the pollution flowing into natural bodies of water－has also become an increasingly visible public concern in China.

The second challenge is related to the first. Enabling the sponge city initiative to reach its full potential involves a whole-of-system approach to managing pollution. Many projects are spot-level solutions at particular sites. Given the broad geographic spread of watersheds, sponge city initiatives will need to be significantly scaled up and an optimum infrastructure coverage share determined.

The recent Water Pollution Prevention and Control Action Plan has already been used to shut down 50,000 polluting companies, but concerns persist about weak and selective enforcement by local authorities focused on “easier aspects of the legislation”. Thus, the problem is not only technical but institutional: China must plug regulatory loopholes and enforce compliance locally.

Finally, funding is a persistent constraint. To date, more than $12 billion has been spent on sponge city projects. Systems required for such projects can be expensive. The central government funds 15 percent to 20 percent of the costs, with the remainder split between local governments and the private sector.

Unfortunately, the initiative coincides with a burgeoning local government debt crisis. Chinese cities may soon find borrowing costs even higher and avenues for deleveraging narrower. As such, sponge city initiatives will compete for the scarcer resources against infrastructure seen as more important amid population growth.

The private sector is another source of gap funding, and public-private partnerships may be a solution. In early 2017, French-based utility company Suez Environment was awarded a $4.7 million contract to help an eco-district in Chongqing improve its wastewater system through integration of digital monitoring technologies.

However, investment in sponge city initiatives is still difficult, with only tepid interest from domestic investors. The government should explore supply-side vehicles for incentivizing investment, including tax credits, deductions, and time-or performance-based exemptions.

China has the opportunity to showcase how prudent planning and regulatory discipline can transform urban flood management and improve water quality. The government has acknowledged this growing challenge and now provides resources and guidance, while enterprising localities compete to fund innovative proposals with ambitious targets.

Asit K. Biswas is a distinguished visiting professor at the Lee Kuan Yew School of Public Policy, National University of Singapore and Kris Hartley is a research affiliate at the Center for New Structural Economics at Peking University and a nonresident fellow at the Chicago Council on Global Affairs.