Singapore a Model for Water Management, but More Needs to Be Done 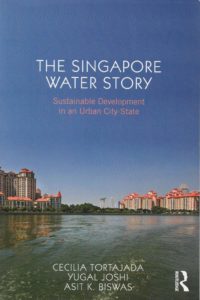 Singapore’s water management is a model for the rest of the world, but while much has been done, there is still room for improvement, according to Drs. Asit Biswas and Cecilia Tortajada, two of the authors of the new book, The Singapore Water Story: Sustainable Development in an Urban City-State.

“The book came about because the water industry is talking as if the water problems have been solved,” Biswas told OOSKAnews in an interview. “Yet we are puzzled why we have a crisis. We thought what we’d do is look at what Singapore was in the early 1960s when it was a belowaverage third-world society in terms of water supply and management, and how in 15 to 20 years it managed to become one of the best.”

Biswas said one key to success in Singapore was strong leadership under former Prime Minister Lee Kuan Yew. Lee received a report on his desk each month showing what the water plan was, what had been done, the reasons for any failures and how failures were being resolved.

“When the prime minister asks for a report every month,” Biswas said, “it concentrates the mind of the bureaucrat.”

The country’s Public Utilities Board (PUB) also provided support for industry switching to use recycled water, branded as NEWater, for industrial use. NEWater is of better quality than tap water, and PUB told Singapore’s industries that it would provide clean water, though they would have to pay higher prices for it since they could use it directly.

Most NEWater now goes to the semiconductor industry, and Biswas said there is effective planning behind this; for example, the industry is located in one place so that underground tunnels can take water to them.

Singapore also goes far beyond other countries in planning for the future, he said. It conducts exercises so citizens and industry can practice living 48 hours without water, with the scenario analysis both helping with planning and also making citizens realize the importance of a good water supply.

Singapore’s ABC (Active, Beautiful, Clean) program embodies careful planning that has resulted in 5,000 kilometers of canals as well as plans for a freshwater estuary every time land is reclaimed.

Governments also continue to use a long-term planning process that “requires a lot of thinking” and checks on what is happening elsewhere in the world, he said.

However, he and Tortajada point out that water usage and water waste are still high in Singapore, and production as well as usage of water could be reduced by better consideration of how to take people on board.

As just one example, nearly one-fifth of the working population is made up of non-residents such as maids or construction workers, and PUB does not disseminate its materials in enough languages for them, so education on conservation for these high-volume water users is inadequate.

Tortajada and Biswas said they are suggesting that Singapore will have to run fast to stay in the same place. Per capita water consumption is 153 liters per day and PUB expects its communications efforts to reduce daily usage to 140 liters by 2030.

“That is very conservative. In Hamburg and Barcelona, it is already 100 liters,” they said.

PUB may need to figure out how to reduce demand for water much faster, for both people and industry.

Tortajada noted that energy is another challenge, since Singapore’s water supply depends on whether there is enough energy to run the system.

“They depend on energy first and water second. If the present trend continues, to be self-sufficient you have to import more energy. You’re changing one problem for another, water for energy,” she warned.

Another concern is water quality deterioration. The quality of water in Malaysia is going down, and Singapore needs to take a look at the long-term impact on humans since Malaysia continues to be a major source of  water, they said.

As Singapore looks ahead at a population that the government has estimated could reach 6.9 million, up from about 5.3 million now, “they’ll have to see other requirements. Can they reduce their consumption fast enough for human beings and for industry? You have means to make it more efficient, but you still need more water. It affects the type of industry you might decide to encourage. People want to live in a good environment.”