No Indian university in global top 200. Why?

But more important than rankings, however, is that the quality of education must be improved significantly so that graduates receive the skills they need for employment. 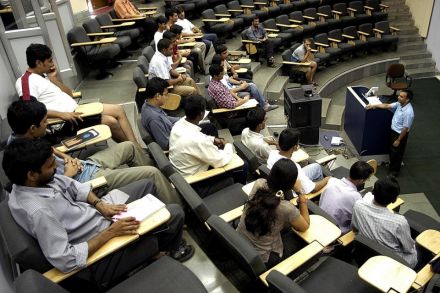 Students attending a lecture at IIT Mumbai, one of the top institutions of learning in India. PHOTO: BLOOMBERG

In September, the Indian Institute of Technology (IIT) Bhubaneswar gave me an honorary doctor of technology degree. It was the second IIT to accord me this honour. I am, of course, immensely proud of what IIT graduates have contributed to the development of India, and also the world. IITs have become a prestigious brand name in the world.

The honour was conferred on me by Indian President Pranab Mukherjee, in his capacity as a Visitor to the institute. In both his public speech and private discussions, he lamented that no Indian university is now ranked among the top 200 in the world even though, historically, the country has had excellent universities like Takshashila and Nalanda. “Today, we languish behind many countries,” he said sadly.

This, of course, is not an unknown problem. Early last year, ex-premier Manmohan Singh noted during a conference of heads of state-run academic universities that “it is a sobering thought that not one Indian university figures in the top 200 universities of the world today”.

There are now three university ranking systems. The oldest one is Academic Ranking of World Universities, popularly known as the Shanghai rankings because it was started by Shanghai Jiao Tong University in 2003. It is updated biannually. The Times Higher Education (THE) World Education Ranking started in 2004 in collaboration with Quacquarelli Symonds (QS). In 2010, QS went its own way with its own ranking methodology; its citation data base is provided by Thomson Reuters. The three ranking systems produce different results because the criteria, and their relative weights, differ. Many of the criteria selected are subjective and depend on the views of the stakeholders sampled. With different stakeholders, the results could be very different.

President Mukherjee’s contention raises two serious issues. First, how relevant are university ranking processes, and do they give a fair indication of the quality of education in a rapidly changing world? Second, should Indian universities be concerned that not even one of them is in the world’s top 200? Only three universities from middle-to-low-income countries are within the top 200: two from China (Peking and Tsinghua), and one from South Africa (Cape Town).

To answer the first question, we need to know how accurate the three ranking processes are. To be ranked, universities have to continually fill up numerous surveys from the three ranking organisations. Thus, how reliable is self-reporting when the results may have high stakes, with considerable economic and reputational consequences? University rankings have become an important tool to attract high-quality staff, good students and serious funding to maintain the university’s global reputation. For university administrators, politicians, government officials, funding agencies and media, rankings are important.

Thus, the temptation to manipulate the data, or play the ranking game, is quite significant. Providing regular global rankings data has become a fiercely competitive, lucrative and booming market. However, the way the rankings are done at present, the roles of poachers and gamekeepers have become blurred.

Consider some facts. Higher education in India has exploded dramatically in recent years. When India became independent in 1947, it had only around 20 universities, 500 colleges and 210,000 students. By the academic year 2011-2012, the numbers had ballooned to 659 universities, 33,023 colleges and 25.9 million students. India now ranks behind only China in the number of students enrolled.

Demand for higher education in the world has exploded, and so has the number of affluent parents who want their children to get quality education for a competitive advantage in life. Thus the need for a reliable assessment of the quality of universities is important.

An assessment of the three ranking systems indicates they consider what can be easily quantified – not what should be measured in terms of quality education. Indicators like teacher-student ratio, faculty internationalisation, research funding levels, staff citations in journals, and achievements of faculty like number of Nobel Prizes won are at best partial or even poor measures of the education the students receive.

None of the three systems asks the students how satisfied or dissatisfied they are with the education they received, or asks employers about the skills and performance capabilities of the new graduates. In a rapidly changing world, and where possibly half of the skilled jobs in 10 years’ time do not yet exist at present, none of the three systems looks into critical skills like logical thinking, analytical and problem-solving skills, competence in oral and written communication, as well as specific technical skills.

The three ranking systems also do not consider the quality of teaching – how good or relevant it is. Sadly, there is no indication that the system is likely to change in the near future because the top 200 universities simply refuse to provide such information. Not surprisingly, they would like to maintain the status quo in terms of ranking since it serves them well.

From my perspective, I am not too concerned about the fact that there’s not a single Indian university in the Global Top 200, so long as they can provide quality education to prepare their students for a rapidly changing world. Sadly, however, I do not see this happening.

India had a good start as early as September 1944 when it was announced that an “Indian MIT” would be set up. Indian Institute of Technology Kharagpur was thus conceived in the image of MIT and started functioning in 1951. When I joined this institution as a student in 1954, it truly had an all-India character, with the best faculty and students available. When the second IIT was established in Kanpur, a large number of faculty members left Kharagpur, including professor M S Muthana, who became director at Kanpur. Over the years, as the number of IITs have proliferated (there are plans to have at least one in each state), these have become provincial institutions.

Until recently, admission to IITs was strictly on merit. IITs became a respected “brand” in the world because they selected students who were India’s crème de la crème. With the proliferation of IITs and a quota system for admission, the overall quality of future IIT graduates is bound to decline. Sadly, for political expediency, India does not have a single MIT, as in the United States, but will have at least 21 IITs in the foreseeable future. Not surprisingly, in 2014, the early admission results showed that during the first intake phase, only 9,061 of 9,711 places were filled. There is still high demand for the first five IITs (Kharagpur, Kanpur, Delhi, Mumbai and Chennai) but not for the newer ones.

This is also reflected in the quality and retention of staff. Overall, nearly 30 per cent of faculty positions in IITs go unfilled because of a lack of good-quality staff. Sadly, Indian politicians, for the sake of short-term gains, have killed the goose that had laid the golden eggs.

Compare this with China’s policy. In 1998, the Chinese government decided to support only nine of their 2,000 universities to become world-class. The results have been truly spectacular. China is now supporting only a few universities at the top level so that these become some of the world’s best.

Regardless of whether any Indian university is ranked within the world’s top 200, the quality of education has to be improved significantly so that the graduates receive the skills they need for employment. If India would like to have elite global universities, it has to select a few that have the potential and comparative advantages, and then support them consistently over the long term with higher funding and less bureaucratic intervention.

The writer is a distinguished visiting professor at the Lee Kuan Yew School of Public Policy, National University of Singapore, and co-founder of the Third World Centre for Water Management, México.