Extensive pollution is changing the mindset of China’s institutions 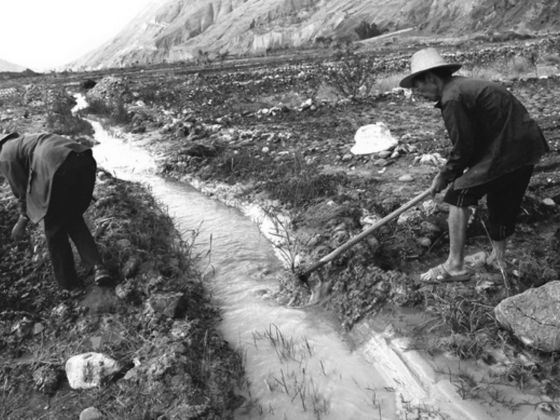 Farmers in China’s Yunnan province digging ditches to lead water from a white polluted stream into farm fields in March 2013. The government estimates that almost 20 per cent of China’s once arable land is now unfit for food production due to soil contamination. Photo: Reuters

Up until the 1960s, most industrialising countries gave scant attention to the air, water and soil pollution that came with the proliferation of factories. To the extent they did, such issues were considered the price to be paid for progress.

By the late 1960s, that price became too high. Confronted by cases of serious pollution — most dramatically, the sight of the oil-contaminated Cuyahoga River in Ohio on fire — and their effects on human and environmental health, the first environmentalists began sounding the alarm. From the 1970s, many countries began establishing environmental-protection ministries to try to clean up the air, water and soil, and prevent further damage.

China, in a sense, has followed the West: Develop first and take care of pollution later. But given its size and the speed of its growth, its environmental reckoning has come much sooner.

In the West, industrialisation took place over two centuries. In contrast, much of the growth in China has occurred during the past three decades. China’s annual gross domestic product (GDP) growth from 1989 to this year averaged 9.85 per cent — an incredible feat no other country has managed in human history.

The result has been extensive air, water and soil pollution.

This is more so because China’s development has been heavily dependent on natural resources, especially coal and oil. Its resource-intensive growth model has been using larger amounts of energy per unit of GDP than nearly all other developing countries.

Accordingly, China has been generating significantly more contaminants per unit of product manufactured, compared with other major economies. For example, it has been estimated by the International Energy Agency that China’s carbon dioxide emission per unit of GDP in purchasing power parity is nearly double that of the United States.

Air pollution is already a serious problem in all Chinese megacities. A group of scientists from the US, Canada, India and China estimate that 1.6 million people die in China prematurely each year because of air pollution.

Several chief executives of Fortune 500 companies have said they have trouble recruiting international staff in China because candidates do not want to breathe dirty air or subject their families to doing so. Over the long term, unless the situation changes, this may affect the level of foreign direct investment in China.

In terms of food security, surveys by the Ministry of Environmental Protection and the Ministry of Land and Resources, conducted from 2005 to 2013, found that about 26.3 million hectares of once arable land, out of a total of 135 million hectares (almost 20 per cent), are now unfit for food production because of serious contamination by heavy metals.

This is primarily because industrial and mining liquid wastes are inadequately treated and disposed of. The food that could have been produced from this loss of productive land could support the entire population of Australia.

In addition, according to official statistics, 10.4 per cent of grasslands, 11.4 per cent of unused lands and 10 per cent of woodlands in the country are severely polluted.

That is not all. In April this year, the Ministry of Water Resources reported that samples from 2,103 groundwater wells in the country’s heavily populated eastern watersheds are seriously contaminated. Some 32.9 per cent of the samples were suitable only for industrial and agricultural use. Another 47.3 per cent of samples were unfit for any type of human consumption. So, 80 per cent is unfit to use for domestic purposes.

Increasing concerns with air, water and soil pollution have resulted in social unrest. Last year, in Guangdong Province, locals protested over the expansion of a coal-fired power plant. This unrest primarily focuses on specific local issues (such as the location of incineration plants), for which some solutions are possible.

Extensive media coverage of environmental pollution has drawn some attention to the problems. In recent years, China’s leaders have publicly expressed concern over environmental problems confronting the country.

Former Premier Wen Jiabao said water problems threaten “the very survival of the Chinese nation”. In March 2014, Premier Li Keqiang, during his first annual policy report, described pollution as “nature’s red-light warning against the model of inefficient and blind development”. He went on to declare a “war on pollution”.

China’s government has acted on this resolve. In 2010, China’s environmental expenditure was two trillion yuan (S$411 billion). By last year, this had more than doubled to 4.5 trillion yuan, nearly 40 per cent of which was to combat water pollution.

In 2014, 1,188 pollution control criminal cases were brought to court, almost eight times the number of court cases in 2013.

In May this year, China Daily reported that Changzhou Intermediate People’s Court in Zhejiang Province accepted a public interest lawsuit against three chemical plants by three national NGOs. The lawsuit alleges that the three chemical factories moved out of the area after seriously contaminating the land on which they were located without restoring it.

The fact that the court promptly accepted the indictment filed on April 29 is a sign of major mindset change in China’s institutions: That pollution has major social and economic costs which no longer can be accepted as a “sign of progress”. This may not have been possible even five years ago. These are encouraging signs.

We are cautiously optimistic that over the next one to two decades, China will be able to halt and reverse environmental pollution trends with new regulations and enforcement. Just as it industrialised in record time, and polluted in record time, our hope is it can also fix the problem in record time.

Cecilia Tortajada is Senior Research Fellow at the Institute of Water Policy in the Lee Kuan Yew School of Public Policy, National University of Singapore; Asit K. Biswas is Distinguished Visiting Professor in the same School. One of their areas of specialisation is development, environment and resources management in China.