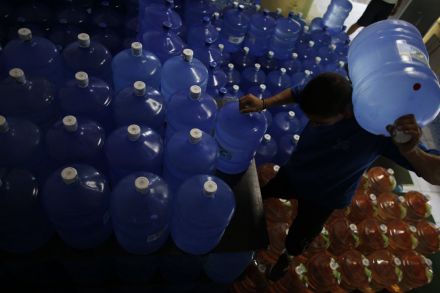 Business is brisk for a water-bottle shop in Sao Paulo, Brazil, (above) which could soon have running water only two days a week. In developed cities, consumption of bottled water has shot up because it is a lifestyle issue, and people feel they can afford it . PHOTO: REUTERS

With World Water Day having fallen on March 22, an objective assessment of emerging urban water trends in the coming decades might be in order.

Predicting the future is difficult. It is even more complex in the urban water sector because what may happen will be an aggregation of unpredictable, interrelated developments in many areas, including the size and structure of the population, economic and industrial growth rates, people’s expectations of standards of living and quality of life and prevailing water­management practices.

One fact can be predicted with complete certainty: the world after 2030 will be vastly different from what it is today.

The urban water sector will also change profoundly. Many of these changes will take place in non­water sectors, over which water professionals will have, at best, limited control. Urban water management beyond 2030 will be an exceedingly complicated task.

Urban water management will face many disruptors currently yet unexpected. The water profession over the past three decades has been claiming business as usual; this is no longer a solution. In the coming years, changes will be thrust upon the water profession, to which it can only react.

The most important trend will be that utilities all over the world will continue to lose the trust and confidence of consumers for real and perceptional reasons. Take the developing world, where utilities supply water of dubious quality for only a few hours every day. Households in most of Asia have lost all hope that they will receive clean water that can be drunk without risk to health.

Following decades of poor services, each household is now a mini­utility which stores water in an underground tank whenever they receive supplies. This supply is pumped to an overhead tank several times each day. Water supply runs only for a few hours each day, but households’ mini­utilities ensure a 24­hour supply.

Households then arrange with a private company to install and maintain treatment facilities so that water can be purified for drinking. In most developing countries, utilities are losing trust because people perceive that water quality is deteriorating.

Consumers are thus installing increasingly sophisticated treatment systems. A decade ago, households in Delhi used carbon filters. Now, water quality is so poor that they have installed reverse osmosis to purify water, a process akin to desalinating sea water.

Water from these utilities may be free or highly subsidised. By installing, operating and maintaining a mini­utility, households are paying some 30 per cent to 40 per cent more, compared to an efficiently­run central utility, to ensure a 24­hour drinkable water supply.

In developing countries, overall trust and confidence in water utilities have steadily declined. In developed countries, the same is true—but for different reasons.

Our research shows that annual private household spending to obtain “better­quality” drinking water is increasing two to four times faster than the utility bills. Consequently, within the next decade, households in most Western cities will spend more on bottled water and point­of­use treatments systems than on utility bills.

All over the Western world and in Singapore, households are spending increasingly more to make their drinking water safe. They are consuming more bottled water and are increasingly using private treatment systems at home. Most households now are willing, and even want, to pay more for water perceived to be safer. They want to be “in charge” and to not have to depend on utilities over which they have no control.

Utilities are rapidly losing public trust and confidence—even those which are providing outstanding services, as is the case in Singapore.

People perceive risks in utility­supplied water, and would rather be safe than sorry, especially when the extra cost is affordable and is considered well­spent for an improved lifestyle.

And indeed, good water has become a lifestyle issue. Members of the younger generation does not “drink” water; they “hydrate” themselves.

In the United States, where drinking habits have changed significantly over the decade from 2001, the consumption of bottled water has skyrocketed. Rising affluence and growing lifestyle aspirations go a long way to explain this; trends are similar in other industrialised countries.

Singapore’s national water agency, the Public Utilities Board (PUB), is the envy of the world for running a well­managed urban water system.

However, dig a little deeper and the situation looks very different. Our studies in several HDB blocks indicate that some 30 per cent to 40 per cent of households boil water before drinking; they spend 25 per cent to 35 per cent of their annual water bill on heating water, even though it is totally unnecessary. Many shops in Singapore sell point­of­use treatment systems which are expensive to buy and maintain, but equally unnecessary.

If such trends continue, water utilities all over the world will steadily lose their importance. Utilities must formulate innovative policies so that these trends can be counteracted.

In Singapore, with a world­class utility like PUB, a major hypothesis for why households do not drink water straight off the tap is that its price has remained constant since 2000. Over the past 15 years, prices have risen significantly for electricity, gas and nearly all other goods and services, and average household income has nearly doubled during this period.

People now implicitly believe that since the price of water has not changed, quality may have suffered—or at least not improved by much. At the same time, aspirations and expectations of the people have risen, and they aspire to better lifestyles for which they are willing to pay. Not surprisingly, Singapore’s bottled water consumption is estimated to double between 2014 and 2020.

There is another reason why the price of water in Singapore should have been increased much earlier, or at the very least indexed to inflation. Water is a strategic resource. Even after all technological advances, half of Singapore’s supply is still imported from Johor. Per capita daily consumption, at 153 litres (lpcd), is high. It compares unfavourably to several European cities such as Hamburg, where water use is 30 per cent less. The current campaign to reduce daily water use by 10 litres by 2030 is too low a target and needs to be revisited.

The relation between water price and per capita water use is well established. Utilities in markets where tariffs cover 130 per cent of operation and maintenance costs use 118 lpcd; those covering less than 85 per cent use 258 lpcd, 220 per cent higher.

Decline in trust in water utilities seems to be universal. The global middle class is estimated to expand from 1.8 billion in 2009 to 3.2 billion in 2020 and 4.9 billion by 2030. This increasing middle class gets a mobile phone first and then goes for water purifiers.

There are many reasons for this loss of trust. As households become more educated and affluent, they are willing to pay more for safe water. They can afford it and do so for health reasons. Even with the combined costs of bottled water, point­of­use treatment systems and water utility bills, expenses seldom exceed 2 per cent of household incomes, which people can afford.

Asit K Biswas is the Distinguished Visiting Professor at the Lee Kuan Yew School of Public Policy and founder of Third World Centre for Water Management, Mexico. He received the 2006 Stockholm Water Prize.