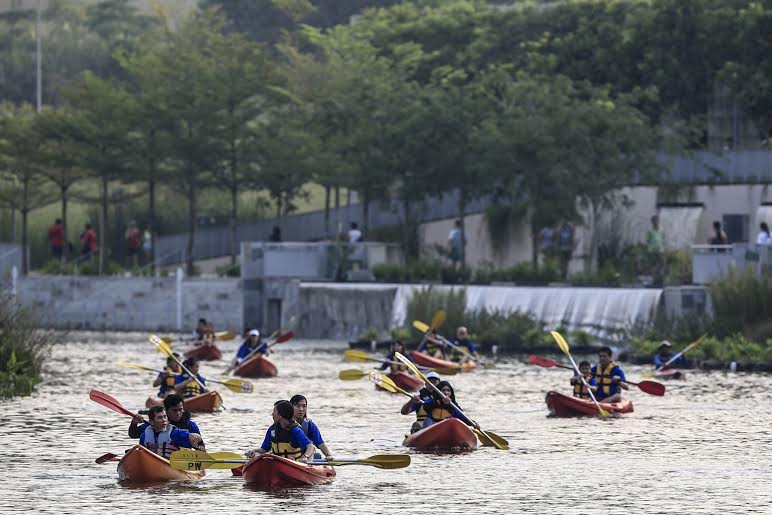 Canoeists at Punggol waterway on Sunday. At 150 litres per person per day, Singapore’s per capita water use is 50 per cent more than the most efficient European Union cities. If this can be reduced by one-third, energy requirements will go down significantly. PHOTO: EUROPEAN PRESS PHOTO AGENCY

Today, March 22, is World Water Day and it is appropriate to assess Singapore’s future in terms of climate change, energy and water security. The city-state has an excellent record of managing climate, water and energy issues over the past three decades. The future, always, is uncertain. Countries will have to run faster and faster to stay in the same place.

For a small city-state like Singapore, with a minuscule carbon footprint, the global implications of whatever it does will not be significant since it contributes less than 0.2 per cent of the global emissions. However, both large and small countries must live up to their commitments to make a real difference to the entire world.

Singapore has made an ambitious commitment to reduce its emissions intensity by 35 per cent, from 2005 levels, by 2030. Even if this level is achieved, Singapore’s absolute rise in emissions will go up. It is thus essential that Singapore makes every effort to reduce its carbon footprint in all spheres. One of these spheres where it could do better is water.

Both water and energy are strategic sectors for Singapore. Since its independence in 1965, the country has steadfastly strived to enhance its water security. It has made significant and commendable progress which would have been unimaginable in 1965.

It currently imports around half of its water needs from its neighbour Malaysia. However, in the past, on several occasions, Malaysia has threatened to cut off this water supply to exert pressure on Singapore. Furthermore, this year, due to drought conditions in Johor, Singapore has been unable to draw water from the Linggiu reservoir on more than 100 occasions.

Singapore has continually sought feasible ways to improve the city-state’s water security. It is aiming to achieve water self-sufficiency by 2060, one year before the current water import treaty with Malaysia will expire. Recent efforts have focused on ramping up infrastructure to increase wastewater treatment and reuse, and sea water desalination, and increasing their efficiencies.

Energy security is also a key priority for Singapore. As a small and resource-scarce island, Singapore is highly dependent on fuel imports for its economic survival. It imports almost all of its energy needs. Reducing energy consumption by improving efficiency and conservation are thus important components in Singapore’s multifaceted energy security strategy.

At present, Singapore’s urban water and wastewater management practices are one of the best in the world. However, advances in water security have come at the cost of energy security. Both wastewater treatment and desalination are highly energy-intensive processes.

More sustained attention needs to be paid in the future to balancing the trade-offs between energy and water security strategies through coordinated policymaking. An example is the second desalination plant which is more energy efficient than the first one. It has reduced its energy footprint per cubic metre of water by nearly 30 per cent. Advancing water security at the cost of decreasing energy security is not a long-term desirable option.

Reducing energy requirements for the water sector will not only reduce Singapore’s carbon footprints but will also contribute to the enhancement of its energy security. However, this will require new out-of-the-box policies for water management. It is estimated that 2 per cent of electricity demand is accounted for the water sector. The aim should be to reduce it further to have a lower energy footprint.

Take Singapore’s per capita water use. At 150 litres per person per day, it is 50 per cent more than the most efficient European Union cities. Singapore’s water price has remained the same since 2000. In 2000, water bills for median households represented 0.69 per cent of their income. Now, it is about 0.36 per cent. In contrast, over the past decade, water prices in Western cities have increased at a slightly higher rate than inflation.

If per capita water consumption can be reduced by one-third through economic instruments, incentives, education and other appropriate means, energy requirements will go down significantly. Since nearly all domestic water used ends up as wastewater after certain time lag, this would mean the amount of wastewater that needs to be treated would be reduced further, saving considerable energy.

Furthermore, even though the quality of tap water in Singapore is excellent, nearly 80 per cent of households boil water before drinking, using even more energy. It is necessary to find out why this is happening and whether households can be nudged to drink water straight from the tap. This will need considerable sociological and perceptional research which is basically missing at present.

A major aspect of Singapore’s water conservation programme has been its overwhelming focus on technology. Economic instruments like pricing and incentives, and how to change social perceptions and behaviours have received very limited attention. In our view, major focus has to be given on pricing, incentives and behavioural aspects to reduce Singapore’s high per-capita domestic consumption.

Wastewater contains considerable energy. More and more of this energy needs to be recovered. Northumbrian Water of England is already recovering energy from wastewater. Consequently its wastewater treatment process is now energy positive. The treatment plant in Aarhus, Denmark, that is expected to be operational this July, is expected to produce 50 per cent more energy than it consumes. These are the harbingers of a new generation of energy-producing wastewater treatment plants of the future. Singapore needs to benchmark itself against Aarhus.

These and other associated developments of the future will ensure that energy requirements for the water sector should become progressively less and less. They will contribute simultaneously to Singapore’s energy and water securities. Reduced energy use will further curtail greenhouse gas emissions which are contributing to global warming. Taken together, they will contribute to enhancing Singapore’s water and energy securities and also reduce its carbon emissions: a win-win-win situation.

Asit K. Biswas is the Distinguished Visiting Professor at Lee Kuan Yew School of Public Policy, NUS; Augustin Boey is a Research Associate, and Cecilia Tortajada is Senior Research Fellow, at the Institute of Water Policy in the same School.