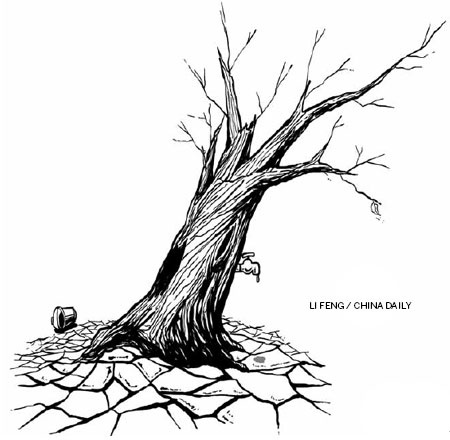 China’s ambitions are high. By 2020, it aims to double its 2010 GDP and per capita income of urban and rural residents both. China’s economic track record has been impressive. It now has a middle class population of more than 300 million and has experienced the fastest ever economic growth over the past 30 years. But it may not be able to maintain this momentum unless it overcomes one of its core policy challenges: water, both in terms of quantity and quality.

Economic growth is no rocket science. Abundant supply of cheap labor and energy powers a country’s industrialization. Without affordable energy, however, energy-intensive businesses are driven out of the market and many factories are unable to produce goods at competitive prices. This link between economic growth and energy—the energy-growth-nexus—is widely acknowledged. But most analysts and policymakers today ignore what really an energy industry is powered by: abundant and sustainable supply of water.

Indeed, China’s economy runs on water. Water is needed at one stage or another to generate energy. China’s industry is the second largest water consumer—it consumes 139 billion cubic meters of water a year—with only the agriculture sector consuming more. And by 2030, Chinese industry’s water consumption is projected to increase to 265 million cubic meters.

Energy generating plants in China are the largest industrial users of water, consuming about 42 million cubic meters of water a year. Since China’s installed energy capacity is projected to double by 2020, energy producers’ share of water will continue to rise. This growing demand will not be matched by the availability of water. For example, the Water Resources Group, projects that if China carries on with business as usual, its demand for water will outstrip supply by 199 billion cubic meters.

China is running out of water, which could soon curb its growth unless immediate countermeasures are taken.

What exacerbates this shortage is the vicious circle of energy and water—if power-generating plants need water then water treatment and supply facilities need energy. The Third World Centre for Water Management estimates that the water sector consumes as much as 25 percent of the electricity generated globally. Though China’s water sector is not yet among the country’s most energy-intensive industries, it will gradually become so with new hubs of growth emerging in the water-scare western region and the increasing demand for wastewater treatment. Already, about 52 percent of China’s economic output comes from water-scarce regions.

Unfortunately, China does not have much water to begin with. It is home to almost 20 percent of the world’s population but has only 7 percent of its freshwater reserves. Water is one of its scarcest resources. And it is extremely inefficient in the use of water and a world leader in water pollution.

China is the world’s largest producer and consumer of coal, which meets more than 70 percent of its energy needs. The country produced 3.8 billion tons of coal in 2011—almost half of the world’s total. Coal may be considered a cheap source of energy, but the air and water pollution caused by the mining and use of the mineral is devastating. According to Greenpeace, 2.5 tons of water is polluted for each ton of coal produced. About 25 percent of all wastewater in China comes from washing coal, and it contains large amounts of chemicals and heavy metals that are almost impossible to recycle. All this makes the true cost of coal in China as high as 1.7 trillion yuan ($272.82 billion), or about 7 percent of its GDP.

So what can the country do to combat these problems? As a first step toward tackling water pollution, China needs to rapidly reduce its reliance on coal. A more ecological alternative could be shale gas. According to the US Energy Information Administration, China has the world’s largest shale gas reserves – up to 36.1 trillion cubic meters. And China does want to increase its shale gas production to 6.5 billion cubic meters by 2015.

Natural gas emits 45 percent less CO2 per unit of energy produced compared to coal. And though hydraulic fracturing, the technique used to exploit shale gas, requires about 4.5 million gallons of water per well, it is equal to what a 1,000-megawatt coal-fired power plant consumes in just 10 hours. Fracturing, nevertheless, could contaminate groundwater. No wonder, France banned hydraulic fracturing in 2011. The use of shale gas, therefore, may not result in cleaner water in China.

If China takes the water-energy-growth nexus into account, it would most certainly seek a more balanced energy mix and not focus solely on exploiting shale gas, for its planned rapid exploitation of shale gas may reduce its CO2 footprint but it will also exacerbate its water shortage.

Admittedly, Chinese policymakers are taking the water problem seriously. But water is still isolated from the country’s energy and growth policies. China aims to reduce its water intensity by 30 percent during the 12th Five-Year Plan (2011-15) period. It has also set new pollution-reduction targets, particularly for the agriculture sector.

The country must adopt a coordinated approach to water, which will gradually price in the external costs of shale gas or coal. Yet there is no sign of China recognizing that water has to be managed cross-sectorally. Its latest plans do say that “water is the source of life, production and ecology”, but it does not have a coordinated policy approach to manage water, energy and economic development holistically, without which it will not be able to fuel its economic growth indefinitely because it will run out of water.

Asit Biswas is distinguished visiting professor at Lee Kuan Yew School of Public Policy, Singapore, and founder of Third World Centre for Water Management. Julian Kirchherr is a graduate student on public policy and management at the London School of Economics (LSE) and National University of Singapore.