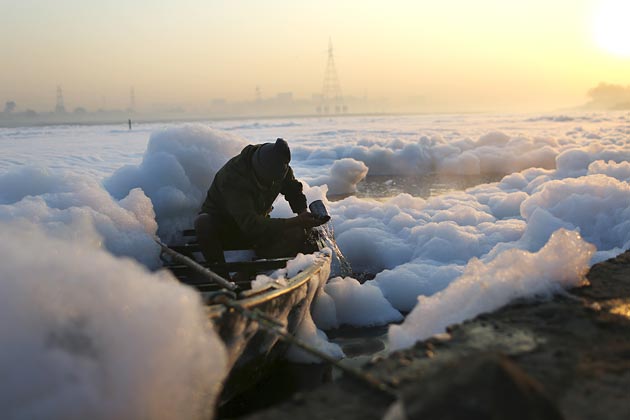 An Indian man bails water from his boat while surrounded by polluted foam in New
Delhi at dawn on Dec. 9, 2012. Photograph by Andrew Caballero-Reynolds/AFP via Getty images

As we mark World Water Day on March 22, it is appropriate to reflect on why a critical problem such as water pollution has disappeared from the global agenda and what that means for our future.

Ignored for decades, water pollution has increased in both developed and developing countries, undermining economic growth as well as the physical and environmental health and quality of life for billions of people.

The U.S., Canada, and some European countries have made considerable progress in controlling water pollution from domestic and industrial sources. However, much still needs to be done.

Take the case of London. Its 21,000-kilometer sewer network was a marvel of the Victorian age when it was constructed. The system ensured that water-borne diseases like cholera disappeared. It also relieved the city of unpleasant smells and significantly improved the overall living conditions.

Some 150 years later, the situation has dramatically changed because of increasing population and lack of investment by successive governments to improve London’s sewage system. Today, when there are 2 millimeters or more of rain in an hour, untreated raw sewage flows into the River Thames. This happens on average once a week. Each year, some 30 million tonnes of raw sewage are discharged into the River Thames.

In America, the Environmental Protection Agency (EPA) estimates that 850 billion gallons of untreated discharges flow into water bodies annually, contributing to over 7 million illnesses each year. When there are heavy rains in Washington, D.C., untreated sewage flows into the Anacostia and Potomac rivers. Under a federal consent decree, the nation’s capital will spend $2.6 billion to fix the problem—the city’s largest investment since the Metro was constructed.

The Congressional Budget Office estimates that investments in drinking water and wastewater systems over the 20-year period from 2000-2019, including operation and maintenance costs, are likely to be on the order of $1.41 trillion to $1.96 trillion. Given that society pays the costs of water services either through ratepayers’ bills or federal, state, or local taxes, it remains to be seen whether the U.S. will have the political will to draw attention to this issue and spend the required resources under the current economic and political conditions.

The situation is much worse in developing countries. The Third World Centre for Water Management estimates that only about 10 percent to 12 percent of wastewater in Latin America is properly treated. Mexico City, for example, “exports” its untreated wastewater to the Mezquital Valley. While the local farmers value this because the water increases crop yields, the wastewater is heavily contaminated with pathogens and toxic chemicals, representing a serious health risk for both farmers and consumers of the agricultural products grown in this area. In India, major cities discharge untreated wastewater into the bodies of water that serve as their drinking water. Delhi, for example, discharges wastewater directly into the Yamuna River—the source of drinking water for some 57 million people.

Even in cities with good wastewater treatment systems, an emerging issue is the presence of man-made substances in our water supply. Increasing use of pharmaceuticals and personal care products has meant that chemicals or “contaminants of emerging concern” have been discovered in water with unknown effects for human and environmental health. An alarming find is intersex fish with both male and female characteristics in a growing number of streams in North America, Western Europe, and Japan immediately below the wastewater treatment plants. We do not know how these contaminants will affect people.

To begin reversing water-quality deterioration on a global level, institutions that can implement the existing and required laws and regulations to solve this extensive problem are desperately needed. Equally important is to convince the general public, as well as politicians, that over a long-term basis it is more cost-effective for a society to live in a clean environment compared with a polluted one. Until and unless the public demands unpolluted waters, it will not be possible to obtain the huge investment that will be needed to improve the quality of our water.

Water quality is a serious concern in nearly all countries. It is estimated that the total cost of this neglect is already around 3 percent to 5 percent of GDP in certain countries. It is time world leaders recognize the enormity of this problem and start taking the necessary actions.