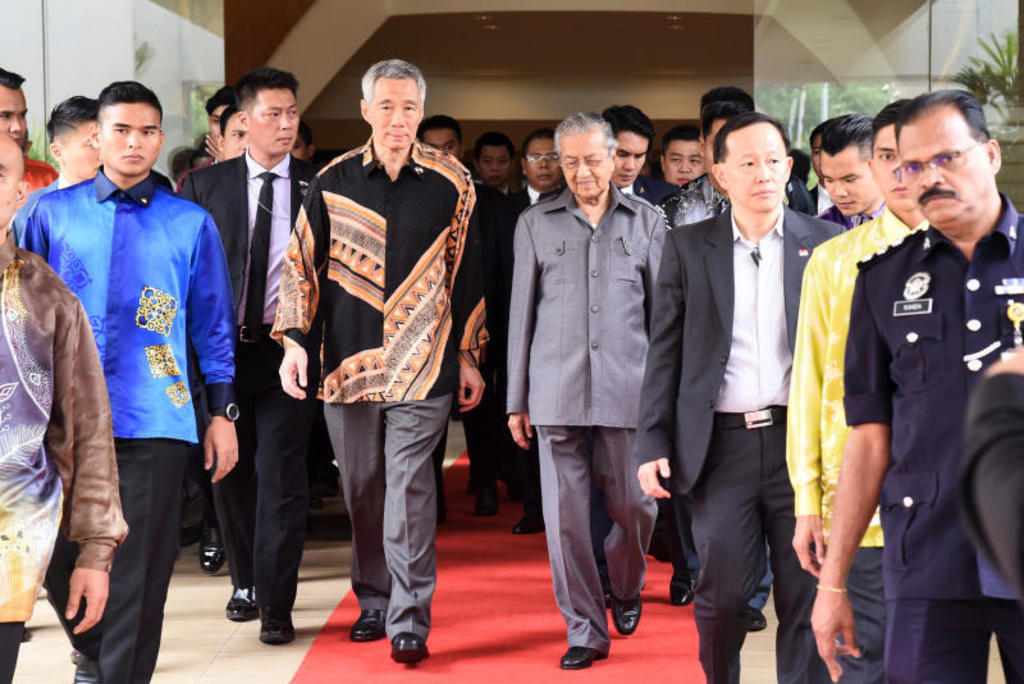 TODAY file photo. Dr Mahathir has revived a dispute with Singapore over a longstanding water supply deal, calling the agreement “too costly” and “manifestly ridiculous”.

SINGAPORE — Dr Mahathir Mohamad’s latest remarks on the water issue shows that the matter which was a source of conflict between Singapore and Malaysia during his first stint as Malaysia’s prime minister continues to be foremost on his mind, most experts who spoke to TODAY said.

However, Mr Bilahari Kausikan, Singapore’s former Permanent Secretary for Foreign Affairs, said that the latest comments from the political veteran could be a “diversionary tactic” to make the Singapore Government look unreasonable, in the hope that this will help Malaysia’s position should it ask for a waiver or reduction of the compensation owed to Singapore in cancelling the high-speed rail project undertaken by both sides.

In an interview with Bloomberg published on Monday (June 25), Dr Mahathir, who was sworn in as Malaysia’s seventh premier in May, said that the longstanding water dispute between Singapore and Malaysia is an “issue that (both parties) need to settle”, when asked if bilateral relations were better and what some “sticking points” are.

Singapore and Malaysia have bickered over water for decades — including entering into a six-year-long negotiation at the height of the Asian Financial Crisis, which was later called off by Malaysia.

Singapore buys water from Malaysia under water agreements signed in 1961 and 1962. The first expired in 2011 and the second will expire in 2061. The pacts were guaranteed by the Malaysian government in the Separation Agreement that established Singapore as a sovereign state in 1965.

Mr K Kesavapany, who served as Singapore’s High Commissioner to Malaysia during the bilateral water talks, between 1997 and 2002, said that the agreements have also been lodged under the United Nations, and any price revisions have to be formally negotiated through arbitration.

“Dr Mahathir has always been unhappy about the price of water Johor sells to Singapore. We had responded by saying we are prepared to address the issue… We attempted to negotiate for a settlement between 1997 and 2003, but no agreement has been reached. I don’t know his motive in bringing this up again,” Mr Kesavapany added.

The 1962 water pact which will lapse in 2061 gives Singapore the right to buy 250 million gallons of water per day (1.14 million cubic metres) from the Johor River. In return, Johor is entitled to buy back a daily supply of treated water from Singapore, up to 2 per cent of the raw water it supplied.

Dr Oh Ei Sun, principal adviser at the Pacific Research Centre in Malaysia, said: “Dr M does not like things or issues which he perceives as unfair, or taking advantage of his side. He likes to ‘right’ these things. The water issue must have been the first and foremost issue in his mind which he perceives to be ‘unfair’.”

There is “not much at stake for Singapore” even if the matter is revisited, Dr Oh said, pointing out that the pact will expire in four decades or so, and Singapore has since diversified its water sources. “While water is of crucial importance to Singapore, today it depends much less on Malaysia to maintain its water supply.”

In response to Mr Bilahari’s view about Dr Mahathir’s “tactic”, Dr Oh believes that the water agreement and high-speed rail are separate issues. “The high-speed rail can be delayed almost indefinitely, much like it has already been all these years, rendering the compensation issue moot.”

Singapore’s national water agency PUB said that the country’s two desalination water plants and NEWater — which is produced by treating used water with advanced membrane technologies and ultra-violet disinfection — supplies up to 65 per cent of the country’s water needs.

By 2060, these two “national taps” are expected to meet up to 85 per cent of water demand, hence reducing dependence on imported water.

Noting, too, that Singapore has been working towards self-sufficiency in water over the years, Dr Cecilia Tortajada, a senior research fellow at the Institute of Water Policy, said: “On the supply side, Singapore is prepared. On the diplomacy side, I am sure that the Government here has established networks with institutions in Malaysia. And (Dr Mahathir’s) one comment doesn’t mean the trust between both countries will be lost.”

Singapore is by no means the sole beneficiary in this agreement, she added. It has supported Malaysia by supplying a larger amount of treated water than was agreed upon in recent years when its northern neighbour had grappled with prolonged dry spells.

The point about keeping up neighbourly ties was similarly raised by Mr Bilahari in a Facebook post on Monday.

The veteran diplomat and former ambassador-at-large wrote that Dr Mahathir’s intention is to make the Singapore Government look unreasonable “hoping, first, that Singaporeans will pressure our government on his behalf, and, second, to set up an alibi with his own people”.

“All this is out of Dr M’s standard play-book. Singaporeans should not be deceived. Good neighbourliness ought to be a two-way street.”

In an interview with online news portal Free Malaysia Today on Monday on whether his comments hint at a review of the water agreement, Dr Mahathir said: “It was not discussed in Cabinet. It only came up because a reporter asked me about it.”

In May, the Malaysian premier said that the 350km rail project, inked under former prime minister Datuk Seri Najib Razak in 2016, had to be abandoned because it did not benefit the country and the Malaysian government has to drastically cut spending and investment to “avoid being declared bankrupt”. He softened his stance a month later, saying that the deal was postponed “because it is far too costly at this moment”.