Water is a human right, but who will deliver it?

Companies are increasingly recognising that water is essential to the survival of their businesses and the private sector will come to play a bigger part in water management and provision in the future, says Asit Biswas, co-founder of the Third World Centre for Water Management. 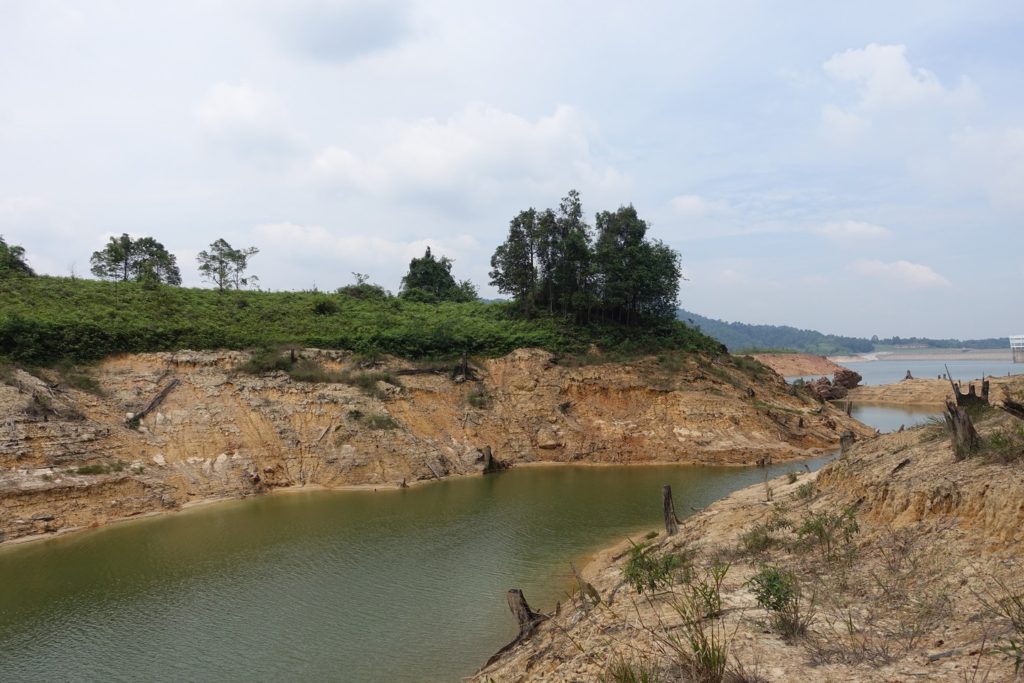 Linggiu Reservoir, Johor in June 2016. The reservoir provides Singapore with about half of its water supply, but dry weather and increased usage in Malaysia have seen drastic drops in water levels. Image: Eco-Business

The public and private sector should heed Pope Francis’s declaration that safe, drinkable water is a human right, and give the issue a central place in policy and business decision-making, said renowned water expert Asit Biswas recently.

At a research seminar on water as a human right at the Lee Kuan Yew School of Public Policy in Singapore (LKYSPP) last week, Biswas shared his thoughts and experience of visiting the Vatican’s Pontifical Academy of Sciences a few weeks ago.

There, the leader of the Roman Catholic church “categorically” called on the private sector to be included in the dialogue on water conservation, said Biswas, who is a founder of the International Resources Association and World Water Council, as well as a Distinguished Visiting Professor at LKYSPP.

This, to Biswas, highlighted the growing recognition of the role that businesses have to play in solving today’s water issues.

He also praised the Pope’s 2015 encyclical, Laudato Si, as “one of the best, balanced documents you’ll ever see”. The papal publication urges humanity to protect the environment and calls access to safe drinkable water a basic and universal human right.

Nevertheless Biswas, who is also co-founder of the Third World Centre for Water Management in Mexico, said he has difficulty with the part of the encyclical that suggests that water should be provided by the public sector.

The Laudato Si, while stressing the importance of a multi-party dialogue, appears critical of the privatisation of this essential resource, seeing it as being in opposition to the concept of water as a human right.

“Even as the as the quality of available water is constantly diminishing, in some places there is a growing tendency, despite its scarcity, to privatise this resource, turning it into a commodity subject to the laws of the market,” wrote the Pope.

“Yet access to safe drinkable water is a basic and universal human right, since it is essential to human survival and, as such, is a condition for the exercise of other human rights.”

But the debate over whether the public or private sector should be responsible for water supply and sanitation is a red herring, said Biswas.

The researcher said that some of the best and worst water management systems have come from the public sector, and the private sector has likewise produced excellent and terrible water management practices. “I don’t care which sector it comes from, as long as the system can provide clean water on a reliable basis and make sure that both rich and poor have access to water,” he said.

In the area of water conservation, Biswas acknowledged that there has been a “sea change” in how the private sector is treating the issue of water. Multinationals such as Nestle, Coca-Cola and Tata Group have made great strides in resource efficiency and offering locals access to clean water.

“Companies have realised that for their own survival, and if they want to thrive, they have no choice but to look at water as a major existential issue,” he told the audience at the research seminar, which was made up students, researchers and development professionals.

Coca-Cola for instance in 2007 pledged to reduce its water consumption, recycle water resources and replenish water in communities and nature, after an anti-poverty group drew attention to Coca-Cola’s excessive use of resources. The beverage giant also encountered local resistance to opening new factories in India, as locals protested the depletion of their water resources.

I don’t care which sector it comes from, as long as the system can provide clean water on a reliable basis and make sure that both rich and poor have access to water.

But the company appears to have made good on its word. From using 2.7 litres of water to make one litre of its eponymous beverage, it now takes less than two litres.

It also announced last year that it has replenished all the water it has used through some 248 community water partnership projects in 71 countries, although critics have said the firm’s replenishment does not benefit the people who depend on local water sources to live. This is because the water replenishment projects are not always carried out in the same areas that Coca-Cola extracts water from.

Nevertheless, such initiatives represent a transformation in business’ approach to water, said Biswas, adding that more companies will start to do the same over time.

While the Pope has christened access to clean drinkable water a basic and human right, as did the UN in a resolution in 2010, this has not been passed as mandatory for governments by the UN Security Council.

Asked by a member of the audience if he expected the UN Security Council to make water a human right and mandatory in the near future, Biswas said: “Chances of that happening in the next 10, or at least the next four years, is zero.” His pessimistic outlook was informed by developments such as US President Donald Trump cutting back on the requirements of the Clean Water Act in the US.

Biswas also weighed in on the Singapore government’s decision to raise water tariffs for the first time in 17 years.

The country’s Finance Minister Heng Swee Keat announced during his Budget speech this in February that water prices will be increased by 30 per cent within the next two years, with the first hike to take place in July. Potable water is currently priced S$2.15 per cubic m, before goods and services tax, and the figure will reach S$2.74 in 2018 when the full price hike kicks in.

The higher water price is meant to reflect the increased costs of supplying potable water to the country as Singapore continues to expand desalination and NEWater production. Manpower and operational costs have also gone up, Heng said.

The government will also extend the Water Conservation Tax to NEWater, high-grade water that has been treated and reclaimed from used water, to encourage resource efficiency. Although potable, NEWater is mostly used in industry and for air-con cooling at wafer fabrication plants, industrial estates and commercial buildings.

Biswas welcomed the price increase, but said that “Singapore lost a golden opportunity by not raising the price of water for 17 years.”

He added that if he were the Singapore government, he would have built up a case for the raise before announcing it. Furthermore, industry in Singapore has been enjoying a “good ride on low-cost water”; Biswas added that he would have doubled the price of water for industry immediately instead of spreading it across two years.

Singaporeans have many misperceptions about water, Biswas commented, as evidenced by the public outcry about raising of water prices. Some have argued that the national water agency PUB should not be raising its prices when it has been consistently turning a profit.

But the utility has only been able to do so thanks to heavy government funding, Biswas pointed out.

Singapore is known as a model of water management despite – or indeed because of – its lack of natural water resources. But water remains an existential issue for the small city-state.

About half of the country’s water supply is drawn from Linggiu Reservoir in Johor, Malaysia under a water treaty that will expire in 2061. But the reservoir could cease to be a viable water source way before that.

As of January 1 this year, the reservoir’s water levels stood at 27 per cent. Foreign Affairs Minister Vivian Balakrishnan has warned that there is a “significant risk” that the reservoir could be emptied in the event of a dry 2017.

Yet, residents still consume an average 151 litres of water per capita per day, says national water agency PUB, and the aim is to lower this to 140 litres by 2030. In comparison, average water consumption per capita is 130 litres daily in Hong Kong while the figure is lower than 140 litres in many European countries.

“So before, during and after, the government should inform the people why the price has to be increased – because of the serious problem that Singapore is going to face in the future,” said Biwas.

“We have to tell Singaporeans that the days when we open the tap and get enough water might be over unless you change your behaviour.”