Water in Singapore: The city state that looks ahead 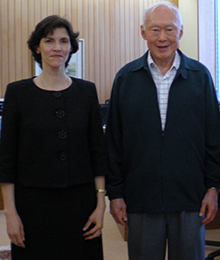 The story of independent Singapore started only 45 years ago in 1965. Since then, the city-state’s apparent vulnerability due to its small size, almost total lack of natural endowments and high water dependence on external sources has been turned into a myriad of opportunities propelling it and its population to continuously higher levels of development.

The characteristic efficient, pragmatic and top-down decision-making in which policies have been formulated and implemented have made national strategic planning a distinctive and flexible process. Forward-looking and holistic thinking has been consistently channelled towards initiating required changes and anticipating and responding to new problems and challenges in what seems to be a permanent search for feasible and cost-effective opportunities.

During the early period of post-independence, Singapore focused primarily on enhancing its indigenous capacity, cleaning its water bodies and constructing and expanding catchments areas and reservoirs within an overall framework of sustainable land use. This in turn shaped urban development patterns and facilitated land and water conservation as well as strict implementation of regulations for storm and inland water management.

In Singapore, overall policy-making, including the one related to water resources, has very much followed a ‘think ahead, think again and think across’ philosophy. Within this overall framework, policy- and decision-making processes consider possible important future events as well as their impacts and implications for the city-state (think ahead), re-evaluate the decisions taken in the light of different scenarios and modify them accordingly in order to improve them (think again), and look for experiences and know-how worldwide to enrich the pool of knowledge (think across). This constitutes a comparative advantage for the country as possible surprises are anticipated and factored in; decisions are reassessed and improved according to global changes, scientific and technological developments and societal attitudes and perceptions; and yielded results and a broad range of potentially relevant scenarios are evaluated. Therefore, apparently serendipitous events are not always unexpected and future changes and challenges are instead determinedly searched for, identified and addressed in advance of their occurrences.

The city-state continues to pursue a development path that would not undermine its scarce land and water resources over the long-term. Following this line of thought, in 2009, the Inter-Ministerial Committee of Sustainable Development identified four strategies to ensure the city-state’s continuous and sustained development. These strategies included improving resource use and management efficiencies in energy, water and waste management so that they continue becoming more cost-efficient and competitive; enhancing the physical environment by controlling pollution, increasing green areas and cleaning and beautifying water bodies; engaging and encouraging communities to play their part by adopting more responsible practices, habits and lifestyles; and building technologies and capabilities with the objective to reach sustainable development targets, propel economic growth and export local expertise.

The report of this Inter-Ministerial Committee acknowledges that population, commercial and industrial growth are strengths as well as areas of concern because of the impacts they may have on each other under varying conditions. For instance, while continuous population growth is expected to have a positive impact on economic growth, water, land and energy resources needed to sustain such growth rates will not increase proportionately, quite the contrary. Population has increased five times between 1950 and 2010 (from one to 5 million) while daily water consumption has increased 12.2 fold (from 32.1 Mgal/day to 380 Mgal/day), putting enormous economic and environmental stress on the system.

Additionally, not only national events but also global and international dynamics will affect the city-state. The global scarcity of energy and other natural resources is bound to have significant impacts on Singapore as, according to its Ministry of the Environment and Water Resources, the city-state imports almost all the resources needs, including basic items such as energy, food and water, as well as all the resources and raw materials needed for its industries to operate.

Singapore’s water story points at the importance of investing in new and innovative technologies that use and reuse all available resources as many times as possible. It also realizes the relevance to put in place policies that encourage the use of such technological advances, including substituting potable water with available alternatives such as marginal quality water, NEWater (very high-quality recycled wastewater mostly for industrial use and, at a minor percentage, for non-direct potable use) or desalinated sea water as and when feasible.

Looking for greater natural resource use efficiencies, the Inter-Ministerial Committee has established specific targets to be achieved by 2020 and 2030. For example, energy intensity per dollar GDP is expected to decrease by 20% and 30% from 2005 levels by 2020 and 2030 respectively. Regarding domestic water consumption, the objective is to drive it down from 156 l/capita/day in 2008 to 147 l/capita/day by 2020 and 140 l/capita/day one decade later. To expand water supplies, catchment areas have been increased to two-thirds of the island’s land area; new fringe catchments are being developed; more NEWater is being produced and being used more intensively; NEWater plants are being interconnected with the demand areas by pipeline networks; and more industries are being encouraged to replace potable water for non-potable purposes with NEWater or seawater whenever technologically and economically possible.

There have been many achievements which are unquestionably commendable and exemplary. Nonetheless, with the resource constraints the city-state faces, it will have to run faster to keep up with developments, maintain good rates of economic growth and, above all, respond to societal expectations. While the city-state justifiably prides itself of the enormous progress it has made over the last decades, it is also fully aware of the many challenges it faces, of the old but recurrent issues that need to be improved upon and of the new emerging problems that ought to be addressed in a timely manner. As in the past, the motivation to continue striving for excellence and improvement will emerge from domestic social and political expectations as well as from international dynamics. At home, the Government will have to give answer to the population’s increasing hopes and aspirations to lead a better quality of life. As part of a broader community of nations and rapidly changing and increasing competition, Singapore will have to successfully navigate in the uncertain future and constantly changing local and global social, economic, technological and environmental conditions that will be beyond its control looking ahead, looking again and looking across.