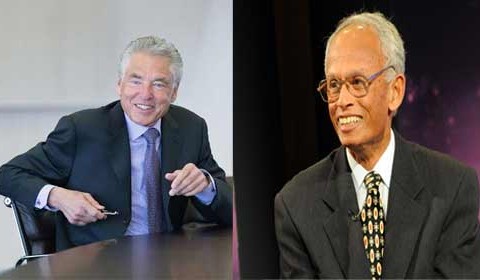 Over the past two decades climate change has steadily climbed the international political agenda. Promoted by Nobel Prize winners, environmental and climate scientists, NGOs, Hollywood stars and film makers, it has become a major global issue. Water issues sadly have not elicited such support. In some regions, climate change may add to water stress, but the main issue is increasing global water shortage from over draft.

There is no question that climate change is important. However, it should be very clear that solving the issue of climate change will not solve the problem of rapidly increasing water scarcity. In our view, over the near to medium-term, efforts to ensure the availability of adequate quantity of good quality water for all human uses have to be given greater impetus.

Furthermore, in contrast to climate change with numerous uncertainties, we know how to solve water problems, including the knowledge, technology and investment funds that are necessary. Yet, poor water management continues all over the world and there are no signs that this situation is likely to improve significantly soon.

Ancient civilizations grew up on the banks of major rivers like the Nile, the Tigris-Euphrates and the Indus where water was plentiful. Human beings are emotionally attached to water, much more than to any other resource like food or energy. This emotional attachment has made efficient water management a difficult process. Throughout history, water has been taken for granted and has been used or abused as seen fit. We have yet to accept that water is a limited resource which must be managed prudently.

One manifestation of this emotional attachment is the fact that water is available free or at highly subsidized prices almost everywhere. Agriculture accounts for nearly 70% of all global water use. Yet, there is not a single country in the world where farmers pay for the full operation and maintenance costs for the supply of water, let alone investment costs.

Even for domestic water, people in very few cities pay the real cost of water services. With sensible water pricing, utilities can be financially viable and people could use water efficiently.

Take Qatar, a desert country where nationals do not pay any water tariff, and expatriates pay about 1/3rd of the cost. Qatar has one of the highest per capita water consumption in the world, at around 430 litres. Add to this nearly 35-50% loss from the system, and Qatar has to produce between 580-645 litres per person daily so that an average resident can receive 430 litres. Each Qatari national receives water free and uses an astronomical 1200 litres per day. This means the utility has to produce 1620 to 1800 litres for them. This contrasts sharply with a Hamburg resident who uses about 110 litres per day.

Poor water management over decades has created numerous structural problems. The Aral Sea used to be the world’s fourth largest freshwater lake. The diversion of two rivers, Amu Darya and Syr Darya, which provided it with a steady flow of freshwater, for cotton production, has reduced it to only a small shadow of what it used to be. Lake Chad was one of the largest water bodies in Africa in the 1960s. Unsustainable water use has meant that its level and size has shrunk by an incredible 90%.

Take China. In the 1950s, the country had 50,000 rivers having catchment areas of more than 100 km2. By 2013, this number has been reduced to 27,000. Rivers have disappeared because of overuse by agriculture and industry. Anecdotal evidence indicates that Indian water bodies are facing a similar fate.

Many of the mighty rivers have now become a trickle by the time they reach the sea. These include the Colorado, Nile, Indus, Yellow, and Murray rivers. The World Commission on Water has noted that more than half of the world’s rivers are seriously depleted.

For water quality, with increasing domestic, industrial and agricultural activities, water bodies in near all urban centres of the developing world are seriously polluted. There is no shortage of evidence. By 2011 water from more than half of China’s largest lakes and rivers were declared unfit for human consumption. More than half of groundwater in northern China is so polluted that it is not suitable for even taking a bath, let alone drinking.

The Indian Government reported in 2013 that nearly half of the country’s 445 rivers are too polluted for drinking in terms of biochemical oxygen demand and coliforms. If other pollutants like toxic chemicals and heavy metals are considered, an overwhelming number of such water bodies can no longer be used without expensive treatment.

The economic, social, health and environmental costs of such heavy contamination are increasing steadily as water has become increasingly more scarce and polluted. In some countries, the real costs of poor water management are approaching as much as nearly 5% of GDP.

If the current trends continue, the situation will get worse progressively. Take industry. Nearly 2/3rd of companies now consider that water poses a substantial risk to their business. Mining giant Rio Tinto announced in April 2014 that it would abandon its Pebble Mine project in Alaska because of water-related concerns and donated its 19% stake to two state charities. Barrick Gold has suspended its Pascua-Lama mine in Chile and Argentina because of concerns with groundwater pollution even though it had spent some $5 billion in construction costs. Water has become a serious business risk.

Aware of the water risks that business faces, over a period of 10 years, companies like Nestlé have reduced its water requirements per US Dollars of sale by more than 65%. By using the latest technology and management practices two of its manufacturing plants in India and Mexico will become net contributors to the environment in 2015, using water extracted from raw materials for many of their processes.

Millions of people are dying each year due to water-related diseases. Droughts and floods are inflicting billions of dollars in damages each year. The United Nations has estimated that droughts are the world’s costliest natural disasters, inflicting $6-8 billion annual losses. Every year floods contribute to major damages, including loss of lives. All these can be significantly reduced by better water management.

As the eminent poet W. H. Auden noted: “Thousands have lived without love, but not one without water.”

Peter Brabeck-Letmathe is the Chairman of the Board of Nestlé, and chairs the 2030 Water Resources Group. Asit K. Biswas is Distinguished Visiting Professor at Lee Kuan Yew School of Public Policy, Singapore and co-founder of the Third World Centre for Water Management, Mexico.