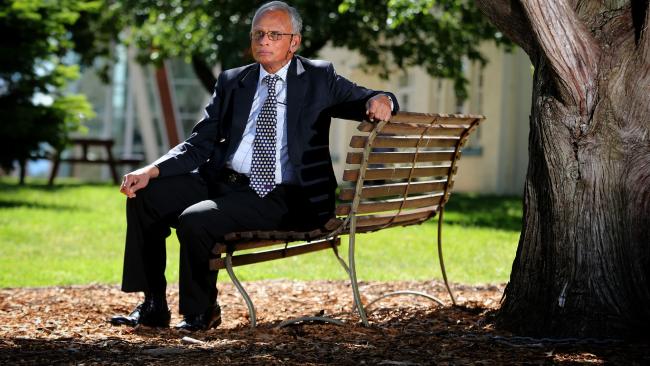 He is a convert to the power of the popular media and an advocate for the moral purpose of academics to influence public policy.

“Some of the world’s most talented people are in academia, but academia doesn’t have much impact on what the world discusses or the policies that are implemented. We do not shape public debates,” Professor Biswas told a public lecture at Australian National University last week.

The issue is fundamental: the rewards and incentives driving promotions are built on publishing in academic journals. But academic journals have few readers, none of whom appear to be politicians or policymakers.

“In my field, water, the highest impact journal has six subscribers in India and 13 in China,” he said.

“That’s 19 subscribers for 2.6 billion people. We did some estimates and calculated that the number of people who will read your paper is a grand total of 10, and that includes the author.”

Professor Biswas, who is a distinguished visiting professor at the Lee Kuan Yew School of Public Policy, likes to joke that he started his life as an engineer “but quickly lost my way because I had some wonderful mentors”.

Among them was Indira Gandhi, whose government he advised when he worked as a senior public service for the Canadian government.

“She told me she wasn’t interested in water. She looked at me and said she was only interested in how to improve the standard of living of India’s poor, how to generate employment or reduce poverty. She told me to frame my question along the lines of how water can be a catalyst for regional development, how it can be an engine for economic growth.”

Professor Biswas also realised Mrs Gandhi would consume summaries of the major stories in the nation’s media each day; that political influence came from the media, not academic journals.

It was a view of the world that he took with him even when, ironically he because co-founder and editor-in-chief of the International Journal of Water Resources Development 30 years ago. He adhered to his opinion even as he authored 82 books and published more than 650 scientific and technical papers, which have been translated into 37 languages. He has received the Stockholm Water Prize, along with a raft of other international awards.

But it was last year when the full weight of his contrarian view came to light. With doctoral researcher Julian Kirchherr from Oxford University, he wrote an opinion piece for the The Straits Times called “Prof, no one is reading you”. He wrote: “Up to 1.5 million peer-reviewed articles are published annually.

“However, many are ignored even within scientific communities—82 per cent of articles published in the humanities are not even cited once.

“If academics want to have an impact on policymakers and practitioners, they must consider popular media, which has been ­ignored by them.”

“He said it had broken all records since The Straits Times had first been published 60 years ago. It’d had 140,000 (online) shares. The next highest was 40,000. There were requests from Turkey to Germany and Australia to publish it. I was flabbergasted. I asked myself, if 140,000 people shared it and read it, maybe it has had some impact.”

This conference was published by THE AUSTRALIAN, November 23, 2016.