Talks to renegotiate Nafta are intractable. Mexico and Canada are looking elsewhere for trade, which may hurt Trump’s electoral base of farmers. 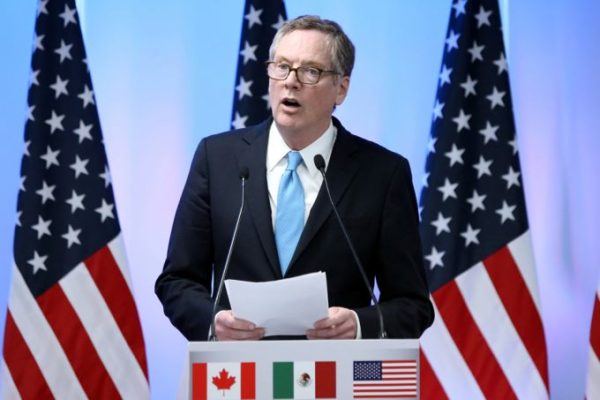 US trade representative Robert Lighthizer speaking to reporters after the second round of talks on Nafta. He was less combative than in the first round, and sounded conciliatory by saying that he wanted “a good agreement”. PHOTO: REUTERS

THE North American Free Trade Association (Nafta) is generally considered a success. Imports and exports among the US, Canada and Mexico have increased significantly since 1993 (pre-Nafta).

Canada was the largest goods export market for the US last year, at US$12.1 billion. It accounted for 18.3 per cent of all American exported goods. If goods and services are included, the US actually showed a surplus of US$12.5 billion for last year. The US also had goods surplus with Canada the year before, when oil prices were low. Oil and vehicles account for almost half of the US’s imports from Canada.

By last year, however, perceptions and attitudes of many Americans towards Nafta had dramatically changed. During his campaign for the presidency, Donald Trump repeatedly called Nafta the “worst trade deal ever made by this country”, and the “worst trade deal in human history”, and blamed it for the loss of some 700,000 manufacturing jobs to Mexico.

The main irritant for USA with Canada lies not with the trade imbalance, but rather the barriers in dairy products and poultry and the continuing dispute on imports of softwood lumber, even though this trade is small. The American trade deficit with Mexico had grown to US$63.2 billion by last year, a margin which he feels should be reduced. Mr Trump’s view is that there should be no bilateral trade deficits since they destroy jobs.

The overall annual US trade deficit grew steadily from US$70.3 billion in 1993 to US$504.8 billion in 2016. The US now has trade surpluses with Hong Kong, the Netherlands, Belgium, Australia, Brazil and the UK; its major deficits are with China (by far), Mexico, Japan and Germany.

The loss of some five million American manufacturing jobs since the early 1990s is not due to bilateral and multilateral trade agreements, but primarily to productivity increases and technological changes. American labour productivity has increased by nearly 50 per cent since the early 1990s. During this period, manufacturing output increased by US$800 billion, but this was achieved with far fewer workers.

Overall, the trade deficit of the three Nafta countries is approximately 2.5 per cent of their respective gross domestic product (GDP), not exorbitant, but not negligible either. Nafta has contributed to a little over 100,000 net job losses in the US – about 0.1 per cent of the labour force.

The first round of renegotiations started in Washington DC, on Aug 16. In his opening statement, Mr Trump’s trade envoy Robert Lighthizer, combatively asserted that Nafta “has fundamentally failed many, many Americans and needs major improvement”. He called for extensive revisions to the deal so that bilateral trade imbalances can be significantly reduced to protect American jobs.

Canada and Mexico struck different tones. Canadian Foreign Minister Chrystia Freeland, said her country “does not view trade surpluses or deficits as a primary measure of whether a trading relationship works”, and noted that the US has a surplus with Canada in terms of trades in goods and services. Mexican Economy Minister Ildefonso Guajardo noted that “for a deal to be successful, it has to work for all parties involved; otherwise, it is not a deal”.

Shortly after the first meeting, Mr Trump told his supporters in Phoenix: “Personally, I don’t think we can make a deal… I think we’ll end up probably terminating Nafta at some point.”

The second round of talks, which covered less sensitive issues, started in Mexico City on Sept 1. Mr Lighthizer repeated some of his tough talk from the first round, but was generally less aggressive. During a media briefing closed to non-US media, he was asked about Mr Trump’s threat to withdraw from Nafta. In his reply, he did not repeat the threat; he was quoted as having said: “I am not taking this position” and “I want a good agreement”.

The third round of talks will be in Ottawa on Sept 23-24. The present plan is to have seven to nine rounds of negotiations, with an agreement by early next year. If this is not reached by March, the talks may have to be postponed since the Presidential election in Mexico will be in July 2018, with the mid-term elections in the US shortly thereafter; Canada is also having several provincial elections.

The Mexican election will be critical to Nafta’s renegotiation. The US has many demands, among them raising the current 62.5 per cent threshold in North American car parts, introducing a new section mandating “substantial” US content, abolishing the existing dispute-resolution mechanism, and buying American procurement provisions, which will make it easier to impose antidumping duties on imports.

With the popularity of Mexican president Enrique Peña Nieto and his PRI party crumbling, he will be unwilling to face his parliament with a trade deal that is unpalatable to his country.

In the latest gubernatorial election in Estado de Mexico, the main bastion of his party, the PRI barely won a bruising electoral battle with the new left-wing National Re-generation Movement (Morena). Morena had fielded an almost unknown former schoolteacher, who pulled in more votes that the two other opposition parties combined.

The leader of Morena, two-time loser in the race for the Mexican presidency Andres Manuel Lopez Obrador (known as Amlo), is an anti-American nationalist. He is now the leading presidential candidate; if he keeps his lead, the probability of Mr Peña Nieto asking for parliamentary approval for a renegotiated Nafta – already not well perceived – is almost zero.

This is likely to be anathema to Mr Trump. If thereafter, Amlo becomes president, the chances of a renegotiated Nafta being approved by Mexico during his six-year tenure are bleak.

Prime Minister Justin Trudeau has promised that a renegotiated Nafta will have to be approved by all provincial legislatures – a complex and time-consuming process.

Following strong rhetoric against Nafta and other trade deals, Mr Trump may find it difficult to get it through the Congress, though both House and Senate have Republican majorities.

Irrespective of what happens to this trade deal, he has forced Mexico and Canada not to depend on the US as a reliable partner. Both are now working actively to develop new free-trade agreements (FTAs) with other countries. This is unlikely to be good news for the US. Mexico now imports US$18 billion in agricultural products from the US, but with its forthcoming FTAs with Brazil, Argentina, Uruguay, Australia and some Asian countries, its agricultural trade with the US may steadily decline; its trade with other countries may rise significantly, as Mexico diversifies its food imports by reducing tariffs.

The net losers are likely to be farmers from the farm belts of the US, many of whom form the core base of Mr Trump’s support. Having released the genie out of the bottle, he may find it difficult to put it back in.

Asit K. Biswas is the Distinguished Visiting Professor in Lee Kuan Yew School of Public Policy of the National University of Singapore. Cecilia Tortajada is a senior research fellow at the Institute of Water Policy at the same school, and editor-in-chief of the International Journal of Water Resources Development. Both are co-founders of the Third World Centre for Water Management in Mexico.