Toward a green, but robust, economy 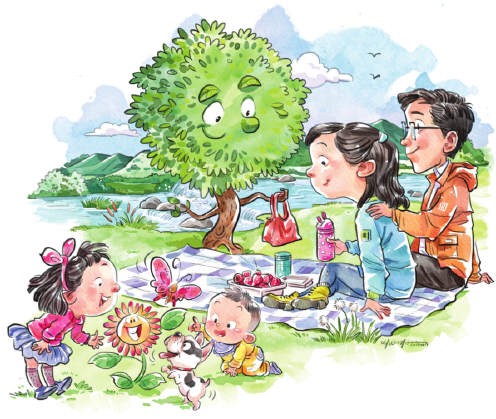 China should speed up “reform of the system of developing an ecological civilization, and building a beautiful China”, General Secretary Xi Jinping said in his report to the 19th National Congress of the Communist Party of China. Promoting green development is one of China’s five key development concepts, and “beautiful” has become part of the goal of a “modern socialist China”. This means ecological civilization has risen higher in the Party’s agenda for China’s development.

Thanks to almost four decades of reform, China has transformed from a planned to a market-based economy with an unprecedented economic growth rate, which helped it meet all the Millennium Development Goals by 2016. From 2003 to 2016, China’s GDP increased from less than 15 trillion yuan to more than 74 trillion yuan ($11.2 trillion), and its per capita GDP from more than 10,000 yuan to over 52,000 yuan.

But this phenomenal economic growth has come at a very high environmental cost. According to the World Health Organization, China faces severe air pollution, which is a health hazard for its people. Water pollution, too, is pervasive. In 2014, 15.7 percent of the country’s groundwater was classified as “very poor” and another 44 percent relatively poor.

But while air and water pollution is visible, soil pollution is not, because even heavily contaminated soil can have as lush and green vegetation as a healthy one. And although air and water pollution can be controlled within a decade, soil cleansing is a very long-term and expensive affair. For example, it took 21 years and millions of dollars for the United States to clean only 1,200 cubic meters of soil across 6.5 hectares in Love Canal in New York.

Other developed countries have gone through similar economic development-environmental deterioration cycle. In the late 1960s, environmental pollution in the Western world was pervasive, and it was accepted as a price for development.

Western countries woke up to the importance of the environment in the 1970s after they were industrialized and their citizens became aware of the heavy economic and health costs of environmental damage. China has now entered a similar stage.

As the effects of environmental pollution in China became more devastating and visible, the government strengthened law enforcement of the Environmental Protection Law in 2015. The new law stipulates that local officials who are complicit in environmental transgressions can be fired or demoted, and business leaders who don’t control pollution can be detained for 15 days, even prosecuted. Moreover, the law doesn’t put a cap on the fine that can be imposed on factories, and says companies violating environmental standards can have their utilities cut and equipment seized, and gives them six months to comply with the eco-regulations or face closure.

Earlier, pollution-related fines were so low that it was cheaper for factories to pay the fines than take corrective actions, and the law’s enforcement was weak and often non-existent. In addition, the central government had limited real power over local government officials who were on the frontline of implementing the environmental law, and the main performance indicator for the local officials was economic growth. Since polluting companies often were important economic drivers, the local officials had reason to turn a blind eye to environmental damage.

Premier Li Keqiang has said China will declare war on pollution and fight it with the same determination as it battled poverty, and environmental pollution has become nature’s red-light warning against the model of inefficient and blind development.

Xi has told all the ministers and governors that pollution control would be one of the country’s top three priorities in the coming years, along with poverty reduction and financial-risk management.

In 2016 and 2017 inspectors from the Ministry of Environmental Protection and the Party’s anti-corruption watchdog and personnel unit were dispatched to different provinces and autonomous regions to see what measures the local officials were taking to protect the environment.

According to the news conference on Monday, during the four rounds of inspections, about 80,000 pollution cases have been well resolved.

The inspection teams proved effective because they included Party officials who could punish municipal－and provincial-level officials for not taking their environmental responsibilities seriously. Such punishments are a blot on the career of officials and bar them for promotion from six months to years. Besides, environmental protection carries a lot more weight today in officials’ performance evaluation.

After environmental protection was made a yardstick to evaluate their performance, officials, especially those eyeing promotion, have started taking environmental issues very seriously.

The courts, too, have started discussing measures against polluters. In July last year, a court in East China’s Shandong province imposed a record penalty of 22 million yuan on glass manufacturer Zhenhua Ltd for emitting toxic gases containing 255 metric tons of sulfur dioxide, 589 tons of nitrogen oxides, and 19 tons of dust particles, between November 2013 and February 2015. A month later, the factory was ordered to shut down.

Similar strong actions by the government are changing the industrial structure, by forcing low-end polluting industries to either become more environmentally efficient or shut down.

Owing to these new environmental safeguards, China requires some policy adjustments, many of which have been outlined in the 13th Five-Year Plan (2016-20). They include introducing services and measures to reduce all types of environmental pollution with specific targets, making the use of energy and other resources more efficient, and improving access to healthcare and education, which could reduce the annual growth rate target for the 13th Five-Year Plan period from 7 percent to 6.5 percent. This shows the focus will now be on the quality of growth to build a “moderately prosperous society” by 2020 and doubling the GDP from 2010 to 2020.

This will affect the supply chain in the short term, for one to two years. But the emphasis on eco-management will expedite the establishment of new industries for environmental protection, monitoring and other management services which, over the medium term, will more than make up for the short-term losses in employment and economic activities because of the economic rebalancing.

China has no option but to take the existing environmental problems head-on, because with business as usual, the economic, social and health costs will become prohibitive in the coming years.

As the Western countries learned, both economically and socially, it is far less expensive to live in a clean environment than in a polluted one.

And based on the current trends, China seems set to curb environmental pollution to build “a beautiful China” to provide the people with healthy living conditions.