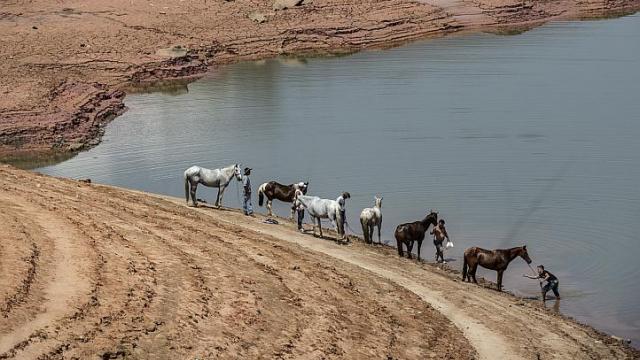 Water at an all-time low in the Jaguari reservoir in Brazil’s Sao Paulo state last November. There are signs of water problems all over the globe. PHOTO: BLOOMBERG

The World Economic Forum (WEF) has just published its 2015 Global Risk Report. This is the 10th year of this global perception survey. A global risk is one that, if it occurs, would cause significant negative impact over the next 10 years for several countries or industries. Twenty-eight global risks were identified and grouped into economic, environmental, geopolitical, societal and technological risks.

In nine earlier reports, the top risks identified by the WEF were all related to financial issues. Asset price collapse, fiscal crises and major systemic financial crises were the top items between 2007 and 2014. This year, the No. 1 spot is occupied for the first time by a non-financial issue: water crises. Fiscal crises ranked No. 8.

There are signs of water problems all over the globe. Water is scarce, polluted, over-exploited, mismanaged and misallocated. Water, both in terms of quantity and quality, is essential to sustain political, economic, social and environmental systems. In an increasingly globalised and interconnected world, water scarcity and pollution, as well as floods and droughts, represent a significant risk to which no country is immune.

Business interest in water is not surprising. Without water, no product can be manufactured and thus there would be no business. Water is becoming scarcer and scarcer in nearly all countries, developed or developing, primarily because of continuing poor management practices. These include not pricing water in a way that is consistent with its scarcity.

Accordingly, companies are realising that water could disrupt their business operations seriously in the future. At the very least, business costs will increase because of lack of water available in quantity or quality, due to higher water prices and increasing compliance requirements for managing wastewater.

Scarcity has also resulted in conflicts between local communities and businesses that are heavy water consumers. In 2013, Barrick Gold suspended its Pascua Lama mine, straddling the Chile-Argentina border, following a court injunction filed by the indigenous communities of Chile because of potential groundwater contamination. This stoppage came after an investment of US$5 billion (S$6.8 billion).

Similarly Rio Tinto pulled out of its Pebble Mine copper and gold project in Alaska, which meant a US$300 million write-off because of potential adverse impacts to salmon fisheries. The company then had to give away its 19.1 per cent stake in the mine to two Alaskan charities.

As for BHP Billiton, it had to invest nearly US$2 billion in a desalination plant for its Escondida copper mine in Chile.

Not surprisingly, water availability is now considered to be the most important consideration for the sustainability of mining companies. Already, nearly 100 per cent of mining, pharmaceutical, electronics and computers, oil and gas and food and beverage companies that belong to the world’s largest 250 companies report their water risks in their annual corporate reports.

Several major companies like Nestle have taken water issues very seriously, and have made significant improvements in their management practices. Over the past 10 years, the company has reduced its water requirements per dollar of sale by over 65 per cent. In addition, by using the latest management and technological practices, it will for the first time have two factories in India and Mexico this year which will actually add water to the environment instead of taking from it. Such advances would have been unexpected even a decade ago.

Regarding water security, few countries have placed greater importance on water availability, accessibility and affordability than Singapore, which has put the issue at the highest level in the political agenda since its independence in 1965. Many other countries have been laggards to use water efficiently. Sadly, a vast majority of the urban centres of the world, including in the United States and Canada, use water profligately.

Water is a renewable resource. That means unlike oil or minerals, water can be used, treated properly and reused. This cycle can continue numerous times with good management but mostly, with good governance. Properly managed and governed, the world has enough water not only for now but also by 2050, when the global population is estimated to be around 9.2 billion, and for all their requirements.

While the corporate sector is now aware of the problems posed by water scarcity, sadly governments appear to be unwilling or incapable of taking hard political decisions to improve water and related resource management practices which are essential if we are to avoid a looming water crisis. As Shakespeare said: “The fault, dear Brutus, is not in our stars, but in ourselves, that we are underlings.”

Cecilia Tortajada is Senior Research Fellow at the Lee Kuan Yew School of Public Policy, Singapore, and Asit K. Biswas is Distinguished Visiting Professor at the same school. Both are co-founders of the Third World Centre for Water Management, Mexico.