The case for self-sustaining rural areas

This will slow migration to the cities, which are already over-populated. 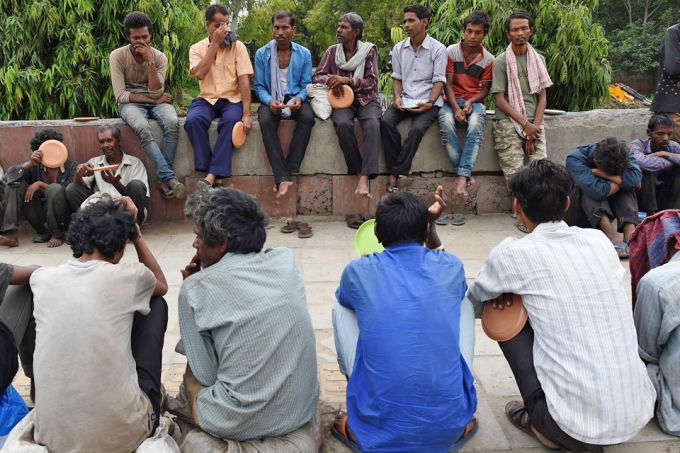 Homeless people waiting for free food at a community kitchen in New Delhi. India’s expanding cities like Delhi or Mumbai are ill-prepared to handle the growing population. PHOTO: AFP

Over the past several months, India’s beleaguered cities have been the subject of much scrutiny and intense criticisms. This year’s monsoon rains have caused numerous losses of lives and economic and social disruptions.

In Bihar, more than 500 people have lost their lives. In neighbouring Uttar Pradesh, more than 100 people have died and some 3,000 villages were submerged. In Gujarat, another 213 people died and around 130,000 people had to be relocated to safer grounds. Bustling metropolises like Delhi, Mumbai, Chennai and Bengaluru ground to a halt. All these cities are overcrowded and suffer from flawed urban planning that intensifies loss of life from natural disasters.

Mumbai, one of the most seriously affected megacities and financial capital of India, is already home to more than 21 million people. Its residential population is expected to double by 2030. This provides little scope for restoring its green cover, wetlands and floodplains that are crucial for flood control, as China is doing for its “sponge cities”.

India’s expanding cities like Delhi or Mumbai are ill-prepared to handle the growing population and to provide a reasonably decent quality of life. Liveability across most cities has steadily declined as municipal governments struggle to manage rapid urbanisation and people’s rising expectations. Without formulation and implementation of good, long-term urban planning, ad hoc and haphazard infrastructure developments have ensured these cities are simply unable to cope with even natural disasters of moderate scales.

More and more Indians are migrating to urban centres in search of better income, education and livelihood. With 410 million urban dwellers, India now has the second largest urban population in the world, after China. The UN estimates that an additional 404 million people will be added to India’s urban population by 2050. Migrants get absorbed in sectors such as construction and services that require unskilled or semi-skilled labour. However, large numbers of these jobs are disappearing, and will continue to disappear due to mechanisation, extensive use of robots and advances in artificial intelligence.

India needs to generate a million jobs each month for at least the next 30 years. Current employment generation statistics show that contrary to expectations, a high-growth economy does not necessarily lead to more and better jobs. By 2050, India’s working population will peak, giving rise to more than a billion people between the age of 15 and 64. If adequate employment opportunities cannot be created for such a large population, there is likely to be increasing social unrest. Cities are already under threat—and not only because of inadequate and dilapidated infrastructure that cannot even meet the current needs, let alone the demanding requirements of the future. Furthermore, rising inequalities in income and opportunities would play havoc with social fabrics of cities.

The typical governance response to this growing urban challenge has been to focus and direct large amounts of funding towards city-centric development plans, aimed at redesigning and upgrading existing facilities. For instance, under the Smart Cities initiative, the central and state governments will allocate 960 billion rupees (S$20.3 billion) over five years for pilot programmes in 100 cities. The competitively chosen cities will also benefit from other infrastructure programmes such as the Amrut scheme, further channelling additional funds to them.

Redevelopment of Indian cities has been the top priority for successive governments for decades. However, such measures are not enough to reduce uncontrolled rural-to-urban migration that increases pressures on an overburdened civic infrastructure, in addition to increasing pollution, environmental degradation and mismanagement which steadily decreases the quality of life for urban dwellers.

As a result, rural exodus is on the rise and cities bear the brunt of sprawling urban slums due to unhindered migration. In the face of rising urban challenges exacerbated by the risk of environment hazards, India needs a new path of development that will ensure sustainable livelihood of the rural people that would reduce rural-urban migration and thus make a positive impact on cities.

After the latest floods, the Gujarat government announced a plan to rehabilitate 15 low-lying (and thus flood-prone) villages from Patan and Banaskantha districts. The plan is modelled on a similar initiative undertaken after the 2001 Gujarat earthquake that destroyed many villages. Such initiatives present a good opportunity to develop model villages that can align priorities to redeveloping rural areas into smart and sustainable villages and reduce rural-urban migration.

An important priority should be on building strong civic and social infrastructure currently lacking in large parts of rural India. The relocated villages should be well-connected through transportation and communication networks to other parts of the country. They should be planned so that all of them have access to electricity, clean water and adequate sanitation and waste-water treatment facilities. If such villages can be consolidated into small clusters, they could also have good access to medical and education facilities, as well as recreational and entertainment alternatives for the young people.

In addition to having good civic amenities, resettled populations should have employment opportunities which could be provided by public and private sectors. These could spur the youth to stay on in rural areas, have options for sustainable livelihood, including starting small business ventures after receiving proper training.

A holistic ecosystem aimed at generating sustainable livelihoods could dissuade small farmers, traders and traditional artisans from migrating to big cities in pursuit of low-paying subsistence jobs. Building self-reliant and sustainable villages that offer a decent standard of living will go a long way in positively impacting both the rural and urban diaspora. If properly planned and executed, such small villages can be transformed into a model roadmap for rural development in India.

Recent debates have revolved around decentralising development by building new urban villages to retard high-speed urbanisation in big cities. Natural hazards like the latest floods in urban areas serve as a reminder that Indian cities are heavily overpopulated, poorly managed and often lack of basic infrastructure. Urban developments continue to be unplanned, unregulated and uncontrolled. Municipal governments are continuously failing to address the needs of hundreds of millions of urban residents due to incompetence and pervasive corruption.

An increase in the severity and frequency of natural disasters in high-risk urban areas could pave the way for a new development agenda. Similar to large-scale investment in cities, attention now should be given to accelerate growth and development processes of rural India. Until and unless India ensures living in rural areas could provide people with a decent standard of living and quality of life, it is difficult to see how India can manage an estimated 1.76 billion people by 2050.