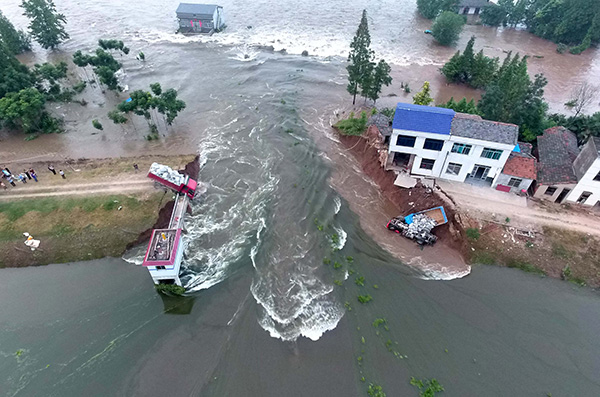 Trucks loaded with stones fell into the gap of a broken dike in Huarong county, Hunan province, on Sunday. Drivers had to jump seconds before their vehicles were engulfed by the water. LI GA/XINHUA

Floods cause more damage each year globally than any other natural disaster－the United Nations says 157,000 people died in floods and another 2.3 billion were affected between 1995 and 2015. The current global average annual flood loss is estimated at $104 billion, and the country incurring the highest loss is China, followed by the United States and India. And these losses do not include disruptions in global supply chains.

Floods have been a perennial problem in China, although the death toll in floods in the country has steadily declined due to construction of dams, dikes and levees, and installing of early warning systems. Still, economic costs of floods have been increasing.

This year’s floods could be one of the worst in China, primarily because rainfall in the country this year has been 21 percent higher than average－the Yangtze River Basin has received 27 percent more rain than average.

As of July 14, according to the Office of State Flood Control and Drought Relief Headquarters, 60 million people in 28 provinces had been affected by floods, which had claimed 237 lives and left 93 people missing. Also, some 147,200 houses damaged and crops on 5460,660 hectares lost. The direct economic loss has already exceeded $20 billion.

China recognized floods as a major economic problem about two decades ago and decided to build large dams like the Three Gorges Dam. And had the Three Gorges Dam and other large dams not been built, floods would have caused significantly higher damage. But social media in China still accuse big dams of increasing the damage from floods.

Chinese cities, in general, don’t have good enough sewerage to drain away excess rain water, because their expansion has been much faster than that of their drainage systems. As a result, the number of cities seriously affected by floods has more than doubled in the past seven to eight years, with over 200 Chinese cities being waterlogged each year during the rainy season.

Poor planning and corruption have exacerbated the problem. Wuhan in Central China’s Hubei province, for example, was known as the “city of 100 lakes”. But it lost 87 of its 127 lakes between 1949 and 2015. And the 40 remaining lakes are not enough to store the rain water during heavy downpours.

Floods could increase annual consumer prices by 0.2 percent, to over 2 percent. They could also have a negative impact on China’s GDP growth in the third quarter.

But construction and rebuilding activities may increase aggregate demand and therefore growth in the fourth quarter could be higher.

Chinese leaders are well aware of the economic and social threats posed by floods, and President Xi Jinping has ordered an array of measures to prevent and fight the effects of floods.

China has made considerable progress in reducing the effects of floods. But it needs a new approach at all levels of governments to fight the menace of floods. For instance, policymakers need to realize floods are a developmental as well as a humanitarian issue. This means systemic problems have to be overcome.

Many water bodies and wetlands in and around cities have been filled up for real estate development, seriously disrupting natural drainage patterns. Lakes, as in Wuhan, have been steadily shrinking. Since governments at provincial and municipal levels have more or less turned a blind eye to construction activities in flood-prone areas, the drainage systems of cities have failed to keep pace with the urban construction boom.

Floods cannot be completely eliminated. But their impact can be significantly reduced by proper land use policies and flood management, and it will take political will, time, money and holistic planning and implementation to significantly reduce flood-related damage in China.