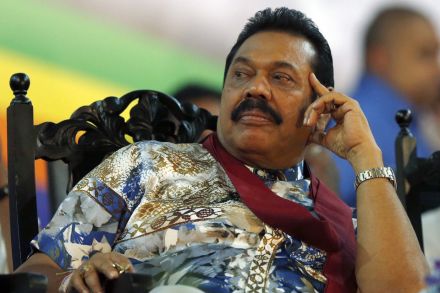 During his second term, Mr Rajapaksa became dependent on
China after India refused his requests because of domestic
politics and the west was wary of helping a regime
suspected of war crimes. PHOTO: REUTERS

NOWHERE in South Asia has democracy been so unpredictable as in Sri Lanka. Only about six weeks before the election in January 2015, incumbent president Mahinda Rajapaksa appeared unbeatable, even invincible. President since 2005, he had ended a festering and bloody civil war of 26 years with the Tamil Tigers in 2009, and the country’s GDP growth averaged 7.4 per cent over the past five years. The Constitution was changed so that he could run for an unprecedented third six­year term. An early election was called two years before it was due because Mr Rajapaksa was supremely confident of victory.

The new President, Maithripala Sirisena, was the minister of health under the ex­president and a long­term ally. The day after election was announced, Mr Sirisena defected and announced his candidacy for the presidency. He went on the offensive immediately, accusing the Rajapaksa family of “taking over the control of the economy, power and the party”. He said that the country was heading “towards a dictatorship”, and that “what our country needs is not a king but a real human being”.

With a credible presidential candidate, many sensed an opportunity to get rid of an increasingly authoritative regime where at least 50 per cent of public spending was under the control of the Rajapaksa family members. Furthermore, independent media was intimidated and muzzled, minorities were repressed and state power and media were extensively used to promote himself and his family. The turnout at the election was high, 81.5 per cent, and Mr Sirisena was elected with a 3.7 per cent majority, an event unthinkable even six weeks earlier.

During the second term of his presidency, Mr Rajapaksa increasingly became dependent on China. First, before the build­up to the war, Mr Rajapaksa had explored getting arms from India, one of Sri Lanka’s major donors. However, India’s United Progressive Alliance (UPA) government led by the Congress party was beholden to minority regional parties such as Dravida Munnetra Kazhagam (DMK) of Tamil Nadu for its survival, and DMK had to have consistently anti­Colombo lines on its sleeves to appease its voters. When India continued to demur, Mr Rajapaksa approached China and it helped the military buildup for the Sri Lankan army’s final assault on the Tamil Tigers.

The major western donors disliked Mr Rajapaksa’s aggressive stand not to allow any independent and objective enquiry into human rights violations by both the government and the Tamil Tigers. The government inquiry was superficial and not credible. An independent inquiry by the United Nations was rejected. Western donors were thus reluctant to provide funds to a regime which was widely suspected to have committed serious war crimes.

With traditional western donors distancing themselves from Sri Lanka because of Mr Rajapaksa’s policies and India being boxed in because of its internal domestic politics, China promptly filled the void. Mr Rajapaksa jumped into China’s embrace with its non­interventionist stand on national issues, including overlooking of war crimes.

It also helped that China had deep pockets to support Sri Lankan infrastructure projects. China had no qualms about the commercial and economic viabilities of projects, especially since the vast majority of the funds were given as loans. This meant Sri Lanka would have to pay them back.

India has been concerned by several aspects of Chinese influence in Sri Lanka. The first is the port at Hambantota which first elected Mr Rajapaksa to Parliament in 1970. It was affected by the Indian Ocean tsunami in 2005 when over 30,000 lives were lost. India was requested to help develop the port but, as usual, the UPA government demurred. China stepped in to develop the port and is providing nearly 85 per cent of the funds as loans. The first phase has been completed at a cost of US$307 million. The second phase is likely to be completed this year at a cost of US$808 million.

China is also constructing a second international airport at Hambantota. Both the port and the airport are being constructed by China Harbour Engineering Company, with 85 per cent funding from Ex­Im Bank of China. It was a sole­source contract and it is the first airport this company has ever constructed. The airport is named after the Rajapaksa family. When Chinese President Xi Jinping visited Colombo in September 2014, he signed a BOT (build­operate­transfer) agreement for a 35­year lease for four of the seven container berths on behalf of this company. While the Indians are worried about the “string of pearls” strategy that China is ostensibly following, they must now be regretting not accepting the initial request to develop the port.

The Rajapaksa government gave another contract to China for a new US$1.4 billion Colombo Port City Project covering 233 hectares of land. China will receive 88 ha on a 99­year lease and another 20 ha on a freehold basis. Accordingly, one­third of the area will be under China’s control for 99 years. It is Sri Lanka’s largest foreign investment project ever, and was inaugurated by Mr Xi. Since 70 per cent of the port activities are related to India, New Delhi is seriously concerned about Chinese intentions and the potential implications. This contract is now on hold and is being reviewed.

This is in addition to the South Container Terminal at Colombo Port which is being managed by a China­led consortium on a 35­year BOT agreement. A Chinese submarine and a naval ship had used this China­controlled terminal, which had alarmed the Indians. Colombo had also enthusiastically endorsed the 21st Century Maritime Silk Road which had further worried New Delhi about Chinese intentions.

The relationship between India and Sri Lanka had frayed under Mr Rajapaksa because both the countries made their own political miscalculations. In his election manifesto, Mr Sirisena noted that Sri Lanka would be neither anti­India nor dependent on India and confirmed in his swearing­in ceremony that his foreign policy would mend “ties with the international community”. During his first official visit to India, Mr Sirisena signed four agreements, one of which was on nuclear cooperation. This is important since the Rajapaksa regime had considered the Kudankulam nuclear plant in Tamil Nadu a “threat” in the event of a potential accident. Sri Lanka has accepted India’s guarantee of safety in case of an accident.

Mr Rajapaksa’s departure and the new Indian prime minister’s “neighbourhood first” policies have provided an opportunity to reset most bilateral relationships. However, it will not be status quo ante bellum (state existing before war). China will continue to play an important role in the country’s infrastructure development, though it won’t be the sole player. For the first time in 28 years, an Indian prime minister has visited Colombo to seal the relations.

In 1978, Bollywood made a movie called Pati, Patni Aur Woh (husband, wife and the other). When any relationship frays because of a new third party, relationships have to be recalibrated.

For India, Sri Lanka and China, with the fall of Mr Rajapaksa, there is a new opportunity to reset the inter­relationships among the three countries.

The writers are co­founders of the Third World Centre for Water Management. Prof Biswas is also the distinguished visiting professor at the Lee Kuan Yew School of Public Policy and Dr Tortajada is a senior research fellow in the same school.