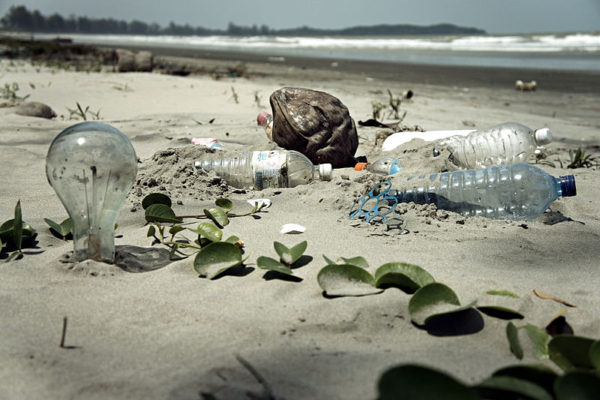 Plastic bags and bottles are a global menace, but the emergence of microplastics will test the policy courage of governments in new ways, Asit K Biswas and Kris Hartley write.

“There’s a great future in plastics” – a famous line from the 1967 film The Graduate – turned out to be a prophetic statement. A ubiquitous part of 21st Century life, plastic is visible for some uses like product packaging and less for others like toothpaste and clothing. Plastic also constitutes an increasing share of solid waste, clogging drainage systems and contributing to flooding in cities such as Dhaka, Bangkok, and Accra. It is now the most commonplace debris found in the ocean, and with eight million more tonnes added each year it may be more prevalent in weight than fish by 2050. As producers find new uses for increasingly sophisticated synthetic materials, integration of plastics into all facets of life has serious implications for public health and the environment.

While plastic has long been an environmental threat, microplastics have received more recent attention. Small fragments less than five millimetres in length, microplastics are sneaking into human diets in previously ignored ways.

Recent studies show that tap water across the world may be polluted by microplastics. Furthermore, up to 30 per cent of plastic released into oceans each year could be microplastics, entering marine food systems through runoff, wastewater effluent, and illegal dumping.

These tiny pieces of plastic have a variety of sources, from degraded or abraded plastic items to “microbeads” in personal hygiene products. A major concern is that these plastics “act like sponges” that attract harmful chemicals, pesticides, and bacteria, and are confused for food by marine life.

While chemicals associated with microplastics may not kill fish, they can severely impair liver and endocrine function. This presents both an environmental and public health concern; fish that consume microplastics include those common in human diets, such as mackerel and striped bass.

Despite the measurable threat of plastics to cities, marine environments, and the global food supply, plastic use shows no signs of abating, with total production in 2015 roughly 400 million metric tonnes. On one uninhabited island in the South Pacific, 3,500 pieces of plastic wash ashore each day, prompting a marine scientist to describe the ocean as “plastic soup.”

Addressing this seemingly intractable problem requires government intervention and lifestyle changes, but the existing decades-long war on plastic is an unproven blueprint and offers little reason for optimism.

Government interventions regarding plastics often focus on visible consumables such as bags and bottles. The presence of plastic bags in stores and homes, or simply blowing in the wind, is a daily reminder of society’s universal dependence.

More than 40 countries tax or limit the use of plastic bags. Evidence from some shows that even modest policy interventions can have significant impacts. For example, in the United Kingdom, usage of plastic carrier bags fell by 83 per cent after the introduction of a 5 pence per bag charge in 2015.

Some governments are going further by instituting outright bans. In August 2017, Kenya banned the production, sale, and use of plastic bags, with violators subject to imprisonment for up to four years or fines of up to US $40,000. This appears to be the most stringent crackdown adopted by any country.

Western Australia became the latest Australian state to announce a ban on all single-use plastic bags and is also introducing a deposit scheme for plastic containers.

In the United States, however, progress eliminating plastic pollution is being slowed by political headwinds. President Donald Trump reversed the Obama administration’s ban on sales of plastic water bottles in national parks. Even under the short-lived ban, sugar-sweetened drinks in plastic bottles were still allowed. Plastic bottles constitute 20 per cent of the waste and 30 per cent of the recyclables at Grand Canyon National Park; the exclusion of soda from the ban was already puzzling, and Trump’s stance marks a further policy lapse.

Cracking down aggressively on plastic use is a tempting option, but draconian interventions can be counterproductive and risk ignoring broader development needs.

For example, Kenya’s ban denies poor Nairobi residents use of plastic bags as “flying toilets” in the absence of adequate public facilities. But policy initiatives are no substitute for lax governance and outdated infrastructure. In the 23 United States national parks that had banned bottled water, refilling stations were already built; this is an example of practical sequencing in policy. Kenya must first improve infrastructure, lest it further marginalise vulnerable populations through impulsive policies.

Immediate and all-encompassing bans are also difficult to enforce, and may, therefore, lose credibility and effectiveness. For example, Dhaka’s storm drains are still clogged by plastic 15 years after Bangladesh initiated a ban on plastic bags. Furthermore, spot-level policies may score political points and grab headlines, but treat only the symptoms of what are systemic problems rooted in a ravenously profit-hungry industrial-political complex.

Plastic bags and bottles have been an obvious menace for decades, but the emergence of microplastics will test the policy capacity of governments in new ways. Adopting elevated standards for water quality, improving treatment technologies, and modernising supply systems can help manage the crisis of water-borne microplastics and other emerging pathologies. Supply-side controls are also necessary; one example is the United Kingdom’s proposed ban on microbeads used in cosmetics and toothpaste.

There is no longer a “great future” in plastics, least of all a sustainable one; a holistic global initiative is needed. The United Nations has launched a #CleanSeas campaign for eliminating microplastics in cosmetics and single-use plastic bags by 2022. It is time for the World Health Organization to introduce universal benchmarks for microplastic content in water, similar to those for lead. This would enable water quality benchmarking across countries, a crucial early step in prompting a global discussion similar to that for other pollutants.

Asit K Biswas is the Distinguished Visiting Professor, Lee Kuan Yew School of Public Policy. National University of Singapore, Singapore. Kris Hartley is a Lecturer in Public Policy at the University of Melbourne and a Nonresident Fellow for Global Cities at the Chicago Council on Global Affairs.