Prof, no one is reading you

An average academic journal article is read in its entirety by about 10 people. To shape policy, professors should start penning commentaries in popular media. 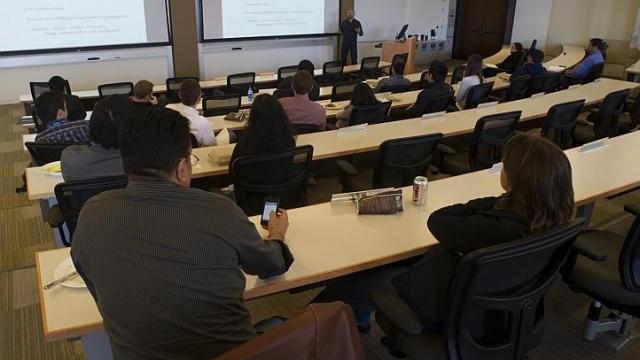 Students at a University of Pennsylvania’s Wharton School lecture in San Francisco. Even if scholars agree on the importance of publishing in the popular media, the system plays against them. Publications in peer-reviewed journals continue to be the key performance indicator within academia: whether anyone reads them is a secondary consideration. PHOTO: BLOOMBERG

Many of the world’s most talented thinkers may be university professors, but sadly most of them are not shaping today’s public debates or influencing policies.

Indeed, scholars often frown upon publishing in the popular media. “Running an opinion editorial to share my views with the public? Sounds like activism to me,” a professor recently noted at a conference, hosted by the University of Oxford.

The absence of professors from shaping public debates and policies seems to have exacerbated in recent years, particularly in social sciences.

In the 1930s and 1940s, 20 per cent of articles in the prestigious The American Political Science Review focused on policy recommendations. At the last count, the share was down to a meagre 0.3 per cent.

Many scholars aspire to contribute to their discipline’s knowledge and to influence practitioners’ decision-making.

However, practitioners very rarely read articles published in peer-reviewed journals. We know of no senior policymaker or senior business leader who ever read regularly any peer-reviewed papers in well-recognised journals like Nature, Science or Lancet.

Most journals are difficult to access and prohibitively expensive for anyone outside of academia.

Even if the current open-access movement becomes more successful, the incomprehensible jargon and the sheer volume and lengths of papers (often unnecessary!) would still prevent practitioners (including journalists) from reading and understanding them.

Brevity is central. Many government leaders now maintain a standing instruction to prepare a two-page summary every morning of what the popular media writes about them and their policies. In India, this was practised by former prime minister Indira Gandhi. Many ministers in Canada insist on similar round-ups. Governments in the Middle East now even request summaries of discussions on new social media.

We are not aware of a single minister anywhere in the world who has ever wanted regular summaries of scientific publications in areas of their interest.

If academics want to have an impact on policymakers and practitioners, they must consider popular media, which has been ignored by them—although media firms have developed many innovative business models to help scholars reach out.

One effective model is Project Syndicate (PS), a non-profit organisation, which distributes commentary by the world’s thought leaders to more than 500 newspapers comprising 300 million readers in 154 countries. Any commentary accepted by PS is automatically translated into 12 other languages and then distributed globally to the entire network.

Even if scholars agree on the importance of publishing in the popular media, the system plays against them.

In order to obtain tenure, scholars must churn out as many peer-reviewed articles in high-impact journals as possible. Publications in (prestigious) peer-reviewed journals continue to be the key performance indicator within academia: whether anyone reads them becomes a secondary consideration.

If the highest impact journal in the water field is considered, it has only four subscribers in India with a population of some 1.3 billion. Three years ago, neither the water minister nor those three levels below him had even heard of this journal. While a publication in such a journal will bring kudos to a professor, its impact on policymaking in India, where water is a very critical issue, is zero.

It may be about time to re-assess scholars’ performance. For tenure and promotion considerations, their impact on policy formulation and public debates should also be assessed.

These publications often showcase the practical relevance and potential application of the research results to solve real world problems, and ability to communicate in a simple, understandable manner.

Admittedly, impact is not guaranteed. Many policymakers already have a reasonably exact idea on the policy option they prefer.

The policy must, first and foremost, satisfy their plethora of stakeholders. Very few decision-makers look only for the most optimal economic, social, environmental, technical, or political solution.

Those who look for scientific evidence would vastly benefit from more publications by scholars in the popular media. Slowly, this is recognised within academia.

For instance, the National University of Singapore now encourages its faculty to list op-eds in their profiles. However, significantly more emphasis is still being given to publications in so-called high-impact journals.

Change is happening but at snail’s pace.

Asit Biswas, a leading authority on environmental and water policy, is distinguished visiting professor at the Lee Kuan Yew School of Public Policy in the National University of Singapore. Julian Kirchherr is a doctoral researcher at the School of Geography and the Environment, University of Oxford. He was with McKinsey & Co before that, advising governments in Europe, Asia and the Middle East.