Change in culture and mindset about water use in private and public sectors needed to tackle world’s water problems. 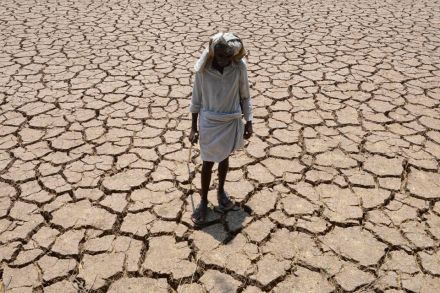 The continuing California drought, and droughts in Australia, China and India, show that these events can directly affect the quality and levels of production, costs of doing business, and net profits. PHOTO: AFP

TWO key events are taking place in Singapore this week. First is the Water Leaders’ Summit within the context of the Singapore International Water Week, and the second is a CNBC discussion on Future of World’s Water: A Business Perspective. Both events will explore in depth the role that business can play in managing global water resources. Senior officers from the world’s largest corporations and leading academic figures will also discuss interlinkages between business and water.

The global business community has faced substantial stress and challenges during the post-2000 period. Among these are investor demands for sustainable investments, resource scarcities, increasing scrutiny by media and social activists about malpractices, real or perceived, and continuing technological and management evolutions.

These developments have heralded a new era for corporate sustainability reporting where businesses explain impacts of their operational practices on society, natural resources and environment. While sustainability reporting has mostly been voluntary, increasing scrutiny and pressure from non-governmental organisations (NGOs), media and governments, have encouraged the companies to assess and often publicly divulge the impacts, both positive and negative, of their activities on profitability and on society, natural resources and environment.

In response to growing demand from investors, NGOs and media for broader and more comprehensive disclosure on environmental, social and governance (ESG) indicators for business operation, the Securities and Exchange Commission (SEC) of the United States issued a guidance for publicly listed companies on key ESG issues. This guidance requires companies to take into account climate-related risks and uncertainties, physical availability of water as well as their quality considerations that could contribute to “decreased agricultural production capacity in areas affected by droughts or other weather-related changes”.

The continuing California drought, and droughts in Australia, China and India, show that these events can directly affect the quality and levels of production, costs of doing business, and net profits. Under serious water scarcity conditions, a company’s licence to operate in an arid region may even be revoked, or significantly reduced. These are all material risks that investors should be aware of since they may affect the share prices of companies.

Consider the current drought in California. This has cost the farmers and agricultural businesses some US$2.7 billion in revenue losses. Similarly, for a major developing country such as India, Indian President Pranab Mukherjee (and earlier finance minister) has aptly remarked that the monsoon is “the real finance minister of India” since it affects the economy in a myriad of ways. Availability of water thus has major economic impact on business and nations.

For water, corporations need to ask three fundamental questions. First, is there enough reliable supply available, both in terms of quantity and quality, for their existing operations and future growth? Second, since water is always a local issue, will local authorities permit water withdrawals during prolonged drought years given their own water management practices are invariably poor and thus unlikely to meet increasing water needs? Third, is there a reputational risk for businesses even when water is available and companies have necessary permits to extract water during drought years? Coca-Cola and Pepsi-Cola had to close plants in India in 2004, even when they had authorisations to extract water.

Savvy investors all over the world are now aware of the importance of water as a business risk, especially for food, beverage, clothing, textile, pulp, paper, energy and mining industries. Every industry needs water for operational purposes, but some industries need significant amounts of water, and are thus more vulnerable to water scarcity.

The first major investor group to demand water information is the Norges Bank Investment Management (NBIM). It now manages an US$862 billion portfolio of the Norwegian Government Pension Fund. It announced in August 2009 that it would start assessing the water risk management practices of 1,100 companies in which they held shares.

Sustainability reports have been around for decades in one form or another. While such reports have gained momentum in the 21st century, their usefulness to investors and general public has been rather limited for many reasons. Corporations in different industrial sectors use different production and manufacturing processes, and have different reasons for producing sustainability reports. In addition, large corporations often have operations in many countries across the world, and several facilities in each country. Thus, methodologically, it is difficult to determine their performance at a global level. Data used for one company, from one plant to another, may not be compatible. Equally, the data reliability often varies among locations.

There is no agreed global standard and framework for sustainability reports. Three most prominent frameworks are Global Reporting Initiative (GRI), International Integrated Reporting Council (IIRC) and Sustainability Accounting Standards Board (SASB). Each has its own philosophy, approach and guidelines as to how sustainability should be defined, determined, assessed and reported.

Carbon Disclosure Project (CDP) started a new water risk disclosure assessment and reporting in 2009. CDP requests water-related information from companies. In its latest 2015 report, it noted only 38 per cent of companies responded to investors’ requests for disclosure on water-related data.

While producing excellent reports, CDP faces some fundamental problems. Companies provide information, which is then analysed. In the current era where major companies deliberately provided erroneous information, there has to be ways to double check the veracity of information received. In addition, companies are interpreting identical questions differently. Finally, reporting activities of companies are often conducted by junior staff, sometimes even by interns, who lack overall understanding of the situations and exercise.

CDP included eight companies in its “Water A List”. Based on our analysis, at least one of the companies in this list do not deserve to be there, and two of the world’s best companies in terms of managing water risk are not included.

IMPORTANCE OF WATER FOR BUSINESS

Even before preparation of sustainability reports became mainstream, many corporations realised that reliable availability of water is a major risk.

Take Nestle. It has taken active steps since the late 1990s to significantly improve its water use efficiencies and wastewater management practices. Between 2005 and 2013, it reduced direct water withdrawal for every product category by one-third. This also meant reduction of total water discharges from 145 to 91 million cubic metres, even though total production increased significantly. It is assisting farmers to produce products in an increasingly water-efficient manner.

Procter & Gamble decided to reduce its water consumption by 20 per cent during 2010-2020. They achieved this target by 2015. Some 70 per cent of P&G products require water during their use. Through technological innovations, these products have become more water efficient and less polluting. For example, Downy fabric softeners enable consumers to rinse only once, instead of 3-4 times, saving 30-50 water in each washing. The company has now completely phased out phosphates globally from detergents, thus reducing the eutrophication potential of receiving water bodies.

Coca-Cola has improved its water use efficiency by 25 per cent since 2005. It also has replenished 94 per cent of water used in finished beverages (153.6 billion litres) through 209 community projects in 61 countries

There is no question that the boardrooms of many major companies now realise that if they want to survive and thrive, they must change their corporate culture and mindset about the use of water. MNCs such as Nestle, Unilever, P&G and Coca-Cola have made remarkable advances since 2000 to significantly reduce their water footprints through new operational policies, process changes and making all their staff more water-sensitive.