More than two centuries ago, Samuel Taylor Coleridge wrote in his immortal poem The Rime of the Ancient Mariner: “Water, water, everywhere, Nor any drop to drink.” 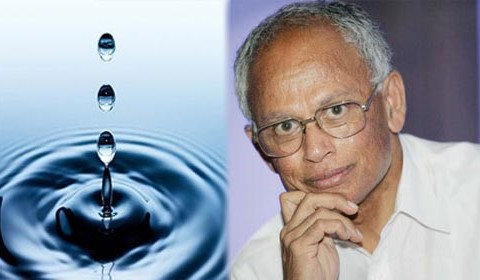 Coleridge’s ancient mariner was stranded day after day in the middle of an ocean on a motionless ship because there was no wind. The freshwater supply had run out. Thus, his statement was fully understandable. However, some 225 years after Coleridge wrote the poem, even for freshwater the situations in many parts of the world have become very similar to what was faced by the ancient mariner.

The situation has now become so grim that even river, lakes or underground waters, near any urban centres of the developing world, cannot be drunk without significant treatment because of health concerns. At present, according to the studies carried out by the Third World Centre for Water Management, at least 3 billion people, and possibly as many as 3.6 billion people, do not still have access to clean drinking water. This is significantly higher than the entire population of the world when Coleridge wrote his remarkable poem.

There are many reasons for this sad state of affairs. First, throughout history, water has been taken for granted. It has been used extensively and abused intensively without considering its future availability. One would be hard pressed to find a single country anywhere in the world where water has been managed efficiently and rationally for even the past 30 years, let alone over a longer period. Not surprisingly, and as a direct result of this continued mismanagement, nearly all water sources in and around urban centres of the developing world are now under considerable stress, because of overuse as well as poor water quality management practices.

Second, throughout the world, one would be hard pressed to find even a single country where the political leaders have considered water issues seriously on a consistent basis over the past 3 to 4 decades. Leaders become interested in water only when there is a severe flood or a serious drought or a calamitous natural hazard. Once the danger has passed, water no longer merits a place in their national political agendas. Sadly, the interest of the political leaders in water has always been transitory. It simply evaporates after a crisis is over. Yet, solutions to all water problems require long-term sustained attention: these cannot be resolved in 3 to 4 months or even 1 to 4 years.

Third, unlike any other resource, water has a deep emotional linkage to human beings in every country of the world. It also has profound meaning and significance in all religions and cultures. It is the only natural resource people expect to be provided free or at highly subsidized prices. Water professionals claim that this is because human beings cannot survive without water. While this may be true, human beings also cannot survive and function without food, energy and many other resources. Yet, no country provides food to everyone free or at very subsidized prices. Without energy, people will freeze to death in most temperate climates and mountainous areas. A city like Singapore cannot function without air conditioning which requires considerable energy. Yet, no one argues that energy or food should be provided free or with high subsidies.

Fourth, water, in most countries of the world is provided free to users. Agriculture, which accounts for nearly 70% of the global water use, is provided free to all the farmers everywhere in the world. Not surprisingly, farmers use water much more than they need, as a result of which in all countries where agriculture is an important activity, groundwater levels have been declining steadily and also river flows because of extensive water abstractions for irrigation. This situation can be noted in developed countries like the United States, France, Spain and Australia as well as in most developing countries.

For domestic water use, prices are either free or subsidized in most places. Even in Singapore, where urban water management is one of the best in the world, water price has remained the same since 2000, while average household income has gone up by nearly 80% during the same period. Not surprisingly, an average person in Singapore uses nearly 50% more water than a Hamburg resident, primarily because Hamburg has used water pricing very successfully as an instrument for water conservation and also has more innovative pricing policies.

The global water situation has been progressively getting worse for the last several decades, not because there is not enough water in the world but because the prevailing water management practices and processes have been consistently poor everywhere. Over the years they have improved only incrementally.

Take the oft-quoted fact that the world has met its Millennium Development Goal (MDG) in safe domestic water availability some three years before the target date. This MDG stipulates that the number of people in the world who do not have access to safe water should be reduced by half between 1990 and 2015. This has been trumpeted by the United Nations as a remarkable achievement.

The concept of “clean” or “safe” water has been basically lost during the MDG discussions. A cynic may even claim that the whole process was deliberately fudged so that no matter what happens in reality, the target could be seen to be achieved. The two leading UN institutions, WHO and UNICEF, came out with a new terminology: “improved” sources of water. For all practical purposes, WHO and UNICEF, who are responsible to monitor the status of global progress in the areas of water supply and sanitation, left the countries to define arbitrarily what constitutes “improved” sources of water. As a result, most developing countries decided to define sources of water as “improved” so long as the people had access to it, irrespective of its quality and quantity available, or even whether water is supplied for human consumption.

All UN institutions, World Bank and regional development banks further obfuscated the problem by referring to at the beginning of their reports “improved” sources of water and then later on consistently refer to it as “clean” or “safe” water. By using the terms “clean” or “safe” significantly more often than “improved” sources of water, the international organizations have created an illusion that “only” 783 million people in the world “do not have access to clean water” at present. For example, the UN System trumpeted this “achievement” in their World Water Day message in 2013 and also in nearly all of their relevant publications. The fact that it refers to so-called “improved” sources of water which the countries are defining as they see convenient, and which by no means is “clean” or “safe” water, has suited well to both the UN System and the countries.

This is because international organizations have been able to trumpet that they have finally met one of their MDG targets well ahead of the targeted deadline. This could then be considered to be a remarkable achievement. This also served most of the developing countries well, which originally provided the misleading national data to the UN System. The UN System accepted these data without any qualms and published such dubious information in their regular assessments. For example, Progress in Drinking Water and Sanitation: 2013 Update notes that Egypt had 100% piped water in all its urban premises in 2011. The corresponding figures for China were 95%, Mexico 94%, Congo 64% and India 51%. Any intelligent and perceptive tourist, who has spent even a week in any of these countries, will dispute these highly inflated self-serving figures which are nowhere near the truth.

Developing countries provide the data to UNICEF and WHO. However, when the same information is printed in an UN document, they proudly proclaim that the “UN figures” show the remarkable improvements their governments have achieved. These misleading figures have suited both UN System and countries well since they show the situation to be significantly better than what they are on the ground.

Consider South Asia as a whole, a region over 1.7 billion people. Neither the UN nor the countries can show even one reasonable size urban centre where its inhabitants receive clean water which they dare to drink directly from the taps. What is even worse is that in cities like Delhi or Dhaka, a decade ago, people were using simple carbon filters to treat their water before drinking. Water pollution has progressively become so severe now that the citizens of such megacities are forced to use membranes to clean water before they can consider it safe for drinking.

Regrettably not only the various UN bureaucrats but also politicians all over the world are simply parroting these grossly erroneous figures. Academics are taking them for granted. Consequently, the consensus global thinking at present is that the water supply and sanitation situations in the developing world are significantly better than what they are on the ground. Even the academics are not reading the fine prints and are repeating the so-called facts.

All these developments remind one Joseph Goebbels’ infamous statement that if lies are repeated often enough, after a while these lies are perceived to be the truths. Sadly, the situation is somewhat similar in the global water supply area.