To achieve this will require political will, public awareness that water is a critically important resource and that users must pay for it. 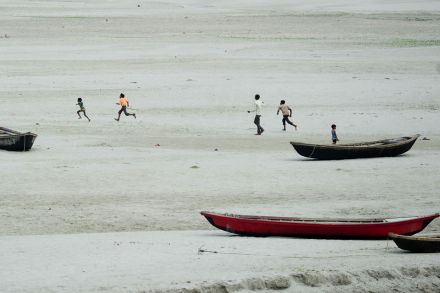 In India, the Supreme Court, in October 2014, slammed the failures of central and state Pollution Control Boards at all levels for the continued pollution of the Ganga, considered to be the holiest river of the country. PHOTO: AFP

On World Environment Day, June 5, it is worthwhile reflecting on a major crisis that is now confronting the world, but receiving inadequate attention. If current trends continue, the world will face a water crisis that will be unprecedented in human history.

During the past decade, there have been extensive discussions on the adequacy of physical availability of water to meet the escalating needs for various uses for an expanding global population and accelerating economic activities. However, inadequate attention has been paid to the rapid deterioration of water quality, which is further reducing a significant stock of water which can no longer be used without expensive and sophisticated treatment.

Water, unlike oil or minerals, is a renewable resource. This means it can be used, treated properly and then reused. This cycle with good management can continue indefinitely. It has been estimated that each drop of the Colorado River water is used seven times. With good management, there is no reason why this could not be increased to 20 or 30 times. The overwhelming concern is that the world is going to run out of physical availability of water in the foreseeable future. We differ.

The world has enough water for all uses not only for now, but also for 2050 when the global population is expected to be 9.3 billion. There is no reason why global water needs cannot be met provided current water and other associated resources are managed efficiently and equitably.

Adequate knowledge, technology and management practices to manage these resources are already available. However, for a variety of reasons – including lack of political will, emotional attachment to water which has contributed to many unsustainable policies in most countries, absence of proper pricing structure, and institutional weaknesses – water is being incorrectly managed.

We strongly believe that the world is not facing a crisis because it is in danger of running out of water, but it is facing a crisis because of improper water management.
Signs of water mismanagement are everywhere. Agriculture is the largest user of water, accounting for 70 per cent of global water use. Yet, there is not a single country in the world where agricultural water is priced to cover even the operational and maintenance costs, let alone investment costs. Thus, farmers everywhere use water wastefully.

Poor agricultural water management practices with short-sighted unsustainable policies have created many serious and often irreversible problems by promoting inefficient water uses. Consequently, flows of some of the world’s mightiest rivers such as Colorado, Indus, Murray, Nile and Yellow are now a trickle by the time they reach the sea. According to the World Commission on Water, flows in nearly half of the world’s rivers are now seriously depleted.

The Aral Sea is another sad example. Bad planning diverted the waters of Amu Darya and Syr Darya rivers, which used to provide it with freshwater, for cotton production. Once the fourth-largest freshwater lake in the world, it has now shrunk by 90 per cent, creating economic and environmental havoc over the region.

China had in the 1950s an estimated 50,000 rivers of catchment area of more than 100 square kilometres. By 2013, the number of rivers has been reduced to 27,000 because of indiscriminate water use by agriculture, industry and cities.

Even though water quantity problems have received most of the attention, the situation is even worse for quality because of continued poor management. All over the developing world, water bodies near or within urban centres are now heavily contaminated with known and unknown pollutants.

Take Brazil, the site for the next Summer Olympic Games. There are very few sites in the world that are as spectacular as the mouth of the Guanabara Bay, at the foot of Sugarloaf Mountain, where the Olympics sailing finals will be held. Crowds should be able to watch the event from the nearby Flamingo Beach.

The Guanabara is now one of the world’s dirtiest bays. This 380 sq km Bay is now an open sewer, receiving 8,200 litres of untreated sewage every second and 100 tonnes of garbage each day. In 2009, when Rio was a candidate for the Olympics, it committed to clean up 80 per cent of pollution and garbage. The situation is now so bad that nearby Botafogo beach has not been considered safe for swimming even for a single day last year or this year. The International Sailing Federation has already said that all races may have to be moved outside the Bay if it is not adequately cleaned up. This is now a distinct possibility.

The situation with water quality is very similar in nearly all parts of the developing world.

Consider China. By 2011, water from more than half of China’s largest lakes and rivers was declared unfit for human consumption. More than half of groundwater sources in northern China are so contaminated that they are not even fit to take a bath in, let alone for drinking.

Similarly in India, the Supreme Court, in October 2014, slammed the failures of central and state Pollution Control Boards at all levels for the continued pollution of the Ganga, considered to be the holiest river of the country. Justice TS Thakur chastised the statutory authorities for doing “nothing” against the polluting industries. He told India’s Solicitor-General: “You should have stood up to those people who have both money, power and resources,” and added: “Your story is a complete story of failure, frustration and disaster. You need to stand up against the polluting units. It will take another 50 years if the task is left to you.”

The Indian government reported in 2013 that nearly half of the country’s 445 rivers are too polluted for drinking in terms of only biochemical oxygen demand and coliform. If other pollutants such as toxic chemicals and heavy metals are considered, water from the vast majority of Indian rivers can no longer be used without expensive and sophisticated treatment.

The industrialised countries have made tremendous progress over the past 25 years in terms of treating domestic and industrial wastewaters. Commensurate progress is missing in terms of treating non-point sources of pollution from agricultural activities. For example, US EPA notes that 40 per cent of surveyed rivers, lakes and estuaries are not fit for swimming or fishing.

In London, England, whenever there are two millimetres or more of rain an hour, untreated raw sewage flows into River Thames. This happens on average once a week. Each year some 30 million tonnes of raw sewage are discharged to the River Thames, contaminating its waters.

There is absolutely no reason why quantity and quality of water in both industrialised and developing countries cannot be better managed to alleviate problems. We already have the knowledge, technology and management expertise to do so.

However, to achieve this will require political will, public awareness that water is a critically important resource and users must pay for it through appropriate charges and taxes, and development of appropriate long-term financial models for its proper management. These are now mostly missing.

To paraphrase Mahatma Gandhi, the world has enough water for everyone’s needs, but not enough if it is not managed properly.

Mr Brabeck-Letmathe is chairman of the board of Nestlé, and chairs the 2030 Water Resources Group. Prof Biswas is a distinguished visiting professor at Lee Kuan Yew School of Public Policy, Singapore, and co-founder of the Third World Centre for Water Management, Mexico.