Infrastructure deficit: Built to last or built too fast? 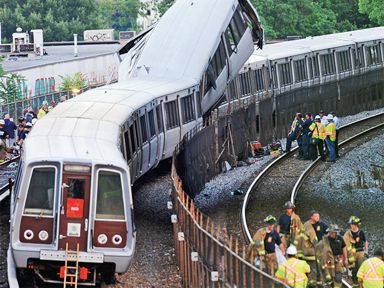 Two recent infrastructure failures tell a story of contrasting growth paths. The collapse of an under-construction flyover in Kolkata drew attention to corruption, malpractice and poor planning in developing countries like India. At the same time, the announcement by Washington DC Metro officials that the subway system is suffering from years of deferred maintenance is drawing attention to infrastructure decay in developed countries like the US.

In both cases, the underlying causes are poor management and governance, which exacerbate fiscal constraints and physical planning challenges.

While the Washington case provides a cautionary tale for development catch-up efforts, are India and other ambitious countries willing to heed these lessons? Or will infrastructure continue to fail after, and even during, construction?

China is proceeding with few glitches to connect its citizens locally through subways and superhighways, nationally through high-speed rail and internationally through gleaming airports. Dams, ports and skylines are China’s vision of a prosperous future that’s already here.

The Kolkata flyover tragedy represents a far greater cost than time and money with 27 people killed and dozens injured, a result as much of poor governance oversight as of structural failure. While shoddy workmanship can be unnoticeable and inconsequential, the dramatic and widely circulated image of a bridge collapsing on to a street bustling with midday traffic reminds the world of India’s growth pains.

In the wake of such incidents, commentators often blame fraud and corruption. Prime Minister Narendra Modi’s government has made a pledge to improve India’s decaying urban infrastructure through FDI.

The construction industry is the primary beneficiary and (like in most countries) represents one of the most corrupt sectors. Calls for more transparency in campaign contributions are loud and frequent. However, a better place to start would be transparency in the bidding and contract-awarding process, including publication of information about not only contractors’ qualifications but also their government connections. This could expose conflicts of interest and significant failures of accountability.

While corruption is old news in developing countries, infrastructure decay is old news in many developed countries. In early 2016, authorities in Washington announced that certain routes on the city’s metro system —which boasts the nation’s second highest ridership after the New York subway— could be closed for months to allow long-delayed upgrades.

The metro’s problems have been long evident. In 2009, faulty signalling caused a crash that killed nine people and injured 90. In early 2015, a rider died as a result of a tunnel fire. This April, a disorganised evacuation of two stations was carried out after a suspected mechanical fire. These are among the latest mishaps that routinely disrupt service and are now eroding public confidence.

More extended disruptions are inevitable and may have a measurable impact on the city’s economy. Whose fault is the Washington metro’s ‘decade-long descent into mediocrity’? Blame goes beyond corrupt contractors and self-serving politicians. Failures are systemic and cultural, reflecting an attitude of deferred sacrifice for development.

The US Congress, which largely oversees the capital’s governance, stubbornly refuses to offer additional funds. With unfunded pension liabilities and mounting upgrade costs, the system now seems to be functioning on a day-to-day mindset, struggling to maintain operations.

India suffers from what a government committee in 2011called a “massive infrastructure deficit in the urban sector”. Even if overpasses stand firm, airports sparkle and metro systems hum on schedule, how long will they last? What is the life-cycle of India’s new urban infrastructure? Are India’s leaders and contractors building ‘to last’?

In many cases, America has failed this standard. A decrepit metro system, collapsed bridges in Minneapolis and Cincinnati, contaminated water in Michigan, and an outdated major airport in New York (La Guardia) speak of corners cut and sacrifice deferred. Indeed, the long-standing business mindset of manage-for now has invaded governance. India has a dwindling opportunity to avoid this fate. In the meantime, watch your step — above ground and below it.