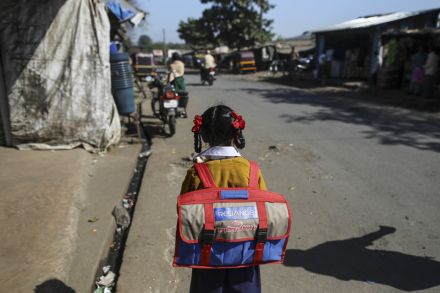 Poor education outcomes are the product of historic disparities that constrain mobility and are deeply rooted in culture. Rooting out toxic attitudes towards human equality—among both victims and the privileged—is fundamental to improving human capital. PHOTO: BLOOMBERG

The World Economic Forum (WEF) recently released its second Human Capital Report. The first was released in 2013. The report argues that “talent, not capital, will be a key factor linking innovation, competitiveness and growth in the 21st century”. By this measure, India’s prospects are not encouraging. The country’s lagging performance is in part a product of poor strategy and ineffective leadership, leading to deterioration in the factors that improve human capital. Three of these -education, mobility and environment- need serious and pragmatic attention from the Indian policymakers.

Divided into five age groups (a departure from the 2013 index), the WEF 2015 index assesses human capital through education, skills and employment statistics across 124 countries. One Asian country ranks in the top 20 overall (Japan at 5), and only three in the top 40 (Singapore at 24 and Kazakhstan at 37). India ranks 100th, narrowly missing the bottom 20 per cent. It ranks 18th out of 22 Asia-Pacific countries, trailing Bangladesh (99th), Bhutan (87th) and Sri Lanka (60th). In South Asia, only Nepal (at 106) and Pakistan (at 113) fared worse.

When examining performance by age group, India seems poised for improvement. Its performance is skewed towards younger generations. In the under 15 age group, which represents nearly a third of the country’s population, India is ranked 67. This is the only group for which India is above the worldwide average for its income group (lower-middle). However, India ranks near or worse than 100 in all other age groups (including 115 in the 55-64 age group, placing it in the bottom 10 worldwide). Further, India’s overall performance is down 22 places from its 2013 ranking (78th), although a comparison of the two is difficult given the adjusted methodologies.

Are India’s national policies responsible for its underperformance? With a large population, stable economic growth, and moderately liberalised economic and political systems, India should be a regional leader in human capital. There is no analysis in the WEF report that specifically addresses India, so it is helpful to examine possible links between these metrics and their causes. The remainder of this piece examines three areas that deserve further government attention: education, social mobility and urban living conditions.

One factor that accounts for India’s low human capital performance is education. Nearly half of India’s 28 million tertiary students are pursuing degrees in the social sciences, business and law. Nearly 20 per cent are in engineering, manufacturing and construction; and roughly 15 per cent in sciences. Humanities, education, agriculture, services, and health and welfare are each 5 per cent or less.

As these graduates move into the workforce, the concern is whether India’s education system is supplying the right mix of workers to meet its economic structure and support its global competitiveness. The current student profile appears to favour the services industry, which has arguably been a growth market for India but also one in which there is increasing competition from the world’s developing and middle-income countries. Indeed, a recent CISAC (the International Confederation of Authors and Composers Societies) report argues that creative industries are now driving growth, and that there is significant unrealised potential in BRICS countries (Brazil, Russia, India, China and South Arica).

Beyond student representation in specific fields of study, there are structural problems with India’s education system. Addressing these problems would elevate the country’s performance in the WEF metrics and, more importantly, the development of its human capital. Calls for improvement in the quality of India’s tertiary education are common, and each year brings a barrage of new initiatives, splashed with novelty and aimed at heroically transforming the system to achieve elusive improvement.

So far in 2015, two significant reforms have already been proposed. The Choice Cased Credit System expands learning options but has been criticised for imposing a uniform curriculum. The “Educate in India” initiative focuses on expanding competition among education providers by establishing a ratings system, expanding loan programme, and removing of regulations in order to enable efficiency. Nevertheless, the Modi administration’s higher education strategy has been criticised for being unclear, indecisive, and hostile to the autonomy of universities.

Rather than tinkering with the operational aspects of education, India should step back and evaluate the overall mission of its tertiary education system. Equality of entrance opportunity (and funding) and a vision to create knowledge are the hallmarks of world-class education systems. These objectives are not mutually exclusive at the system level, but individual universities should be targeted to pursue specific goals. For example, resources for research should be concentrated in universities with the highest potential for global status, while skill development programmes should be emphasised at universities catering more to applied fields. This approach absolves universities from (often inadequately) attempting to serve multiple missions.

Socio-economic mobility is a second factor that constrains human capital development. Typically, the relationship between these two is viewed in reverse: underdeveloped human capital leads to lack of mobility. However, lack of mobility can entrench counterproductive patterns of thinking handed down across generations. This vicious cycle is not unique to India; indeed, across the world poverty and poor human development are the products of a negative feedback loop where opportunity bypasses generations of people trapped by economic marginalisation. This phenomenon is also at the heart of the debate about government intervention (welfare vs “bootstrap” free-market capitalism).

In early 2015, a World Bank report argued that the chances of escaping poverty in India are equal to those in the United States. Those familiar with social mobility in the United States know that it is not good company to keep in this measure. The report cites an increase in the number of people moving above the poverty line, but many are at the margins and easily slip below.

Education and mobility are intricately related. Poor education outcomes are the product of historic disparities that constrain mobility and are deeply rooted in culture. Nevertheless, one of the most contested battlefronts for mobility is in the minds of citizens themselves. A recent UC Berkeley study of India’s Hindu caste system found that many people believe that their social and economic fate is defined by their social status at birth. These deeply rooted identities lead to a self-determinism that can lower the ambitions of otherwise intelligent people. Rooting out toxic attitudes towards human equality – among both victims and the privileged – is fundamental to improving human capital.

A recent article in Hindustan Times described how the blight, strife and crushing social desolation of many Indian cities are a social pathology.

“Such unstructured physical blight also reflects in a daily atmosphere of urban despair. Wherever you go, you come face to face with the sad consequence of a degenerate, defeated city,” states author Gautam Bhatia. According to his argument, without meaningful opportunities to connect, people revert to self-serving and even criminal behaviours. Indeed, India has recently received global attention for violent crimes against women, and 13 of India’s cities are among the world’s 20 most polluted.

A recent New York Times op-ed laments that “the air and the mounting research into its effects have become so frightening that some feel it is unethical for those who have a choice to willingly raise children here”. The point about troubled cities underscores the importance of linking human capital development with the built environment – a factor squarely within the purview of government. Absent improvements in the rudiments of daily life and the fulfilment of basic human needs, India stands little chance of improving its human capital.

The conditions in which most Indians are brought up present a significant obstacle to human development. From education to social privilege to basic safety, a majority of India’s children must confront debilitating assaults on their livelihoods long before they enter the job market. To stay relevant in a global economy defined by “talent, innovation, and competitiveness”, India should take a more comprehensive view of development that incorporates all elements of human capital. Deeper educational reforms, an emphasis on creating a level socio-economic playing field, and improvement in basic urban living conditions would represent a good start.