India and China: lessons on how not to tackle inequality 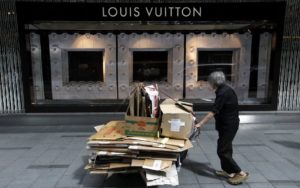 The poor continue to be drowned out by a global minority enjoying elite status. EPA/ALEX HOFFORD

Wealth inequality continues to grow, according to the 2018 edition of the World Inequality Report. In the past three decades, 28% of the aggregate increase in real incomes in North America and Western Europe was captured by the top 1% of earners. The bottom half saw less than 10% of this increase. Inequality has also settled at alarmingly high levels in sub-Saharan Africa and the Middle East.

This crisis was never inevitable. Middle-class wealth reached its peak in the mid-1980s. But it’s been ravaged by stagnant incomes, unstable property and investment markets. Growing consumer debt is also a problem. Failed policy and weak political will are two culprits: more creativity and effort seems to have gone into election year soundbites and platitudes than into substantive solutions.

Many developing nations have targeted poverty alleviation and improved living standards as ultimate policy goals. While China has achieved poverty alleviation on an historic scale, policy obstacles remain. These include bureaucratic inefficiency and failed policy implementation. India has likewise made progress in alleviating poverty though it lags significantly behind China.

Inequality hampers growth by leaving human potential unrealised. The middle class provides a crucial market for consumer goods and services, which in turn creates jobs. The cycle is interrupted when profits are excessively retained rather than reinvested into further capacity – such as strong health and education sectors. Market purists argue simplistically that there should be no constraint to profiteering within legal bounds.

Government policy is needed to balance private and social interests.

The ability of China, India, and other developing countries to end poverty lies with job creation. Industrial jobs replace agricultural jobs, lifting incomes as labour is shifted to higher value-added work. However, this continuing shift also exacerbates the growing inequality gap. The World Inequality Report points out that in China, this gap is geographic. Coastal urban regions are leaving the more rural interior far behind.

Between 1978 and 2015, the report shows, urban share of national income increased from 30% to 80%. Today urban households earn 3.5 times more than do rural households. Two Chinas are emerging. One is urban, educated, and mobile. The other is isolated, immobile and tethered to outdated livelihoods and social assistance.

India, meanwhile, is expected to be the world’s fastest growing large economy in 2018. It’s now home to more than 200 000 millionaires and over 100 billionaires. India’s population of 78 million who earn USD$10 per day are considered “middle class” by the National Council of Applied Economic Research.

By World Bank estimates, 270 million Indians – that’s nearly 20% of its population – were considered poor as of 2012. India also saw the fastest rise in inequality of all major world regions between 1980 and 2016, and 55% of the country’s income share is in the hands of the wealthiest 10%.

There is little hope that these discouraging trends can be reversed. Across the developing world, blunt policies are not only proving ineffective at reducing poverty. They are also arguably widening the wealth gap.

Inequality is decried at campaign rallies and in the global commentariat. But little is being done at any policy level. Thomas Piketty’s proposed global tax on individual net worth – targeting the super rich – lacks an obvious coordinating body. Worse, it would trigger crippling panic from the right about imaginary one-world-order-style socialism.

In the absence of such a broad initiative, most national level policies are either ham-fisted or intentionally ineffective. Even genuinely concerned governments plod forward as though bewildered by the challenge. They tinker at the margins with transfer payments and social programmes while failing to address structural causes such as gaps in educational achievement and public health.

There are numerous examples of policy ineptitude. Governments in the US and India are in thrall to oft-discredited claims about “trickle-down economics” and have passed sweeping tax reforms that substantially favour corporations.

In India, employment in agriculture is declining without a commensurate rise in urban manufacturing employment. Narendra Modi’s government has promised about 10 million new jobs per year; only about 230,000 materialised in 2016.

The twin reforms of demonetisation and a goods and services tax may have also stunted job growth by crippling the construction and informal sectors. It’s in these sectors that most migrant workers find jobs.

Failure to improve basic services is one of the most glaring gaps in inequality policy. China’s economic rise has generated tax revenues to invest in schooling. But education gaps persist in the country’s rural areas. Private sector and philanthropic intervention, while helpful, is no substitute for equal access.

In India, the 2017 Economic Survey revealed that the government spends only about 1% of GDP on health services, compared the world average of 6%.

Inequality is not ignored for a lack of evidence; the challenge is made clear in research studies like the World Inequality Report and in daily press headlines. China’s inequality garnered global attention in a recent story about the “ice boy”, an eight-year-old student in rural Yunnan province who walked three miles through freezing cold weather to reach school.

Perhaps the personalisation of inequality would more effectively influence public sentiment and policy pressure. At the moment political will is inexcusably weak. Mere statistics are failing to prod governments beyond election-year soundbites and platitudes. Both the economics and the ethics of inequality demand transformational thinking. But the voice of the poor continues to be drowned out by a global minority enjoying elite status – and, based on voting patterns, even by the many who aspire to such status.

This article was published by THE CONVERSATION, April 9, 2018.