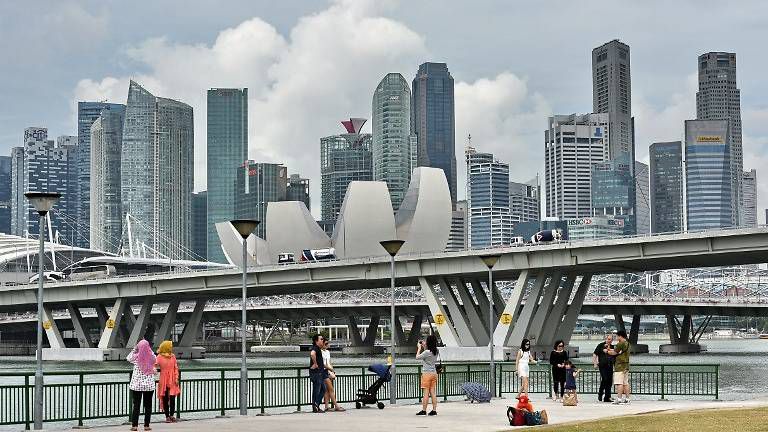 People taking in the view of the city skyline along Marina Bay in Singapore. (Photo: AFP/ROSLAN RAHMAN)

SINGAPORE: Singapore’s projected 2019 growth rate in gross domestic product (GDP) of 0.5 to 1 per cent comes as a shock to many but is expected given current geopolitical instability and weakening global demand.

October marked the third quarter in a row that Singapore exports have fallen.
Global headwinds and geopolitical tensions have been blamed. When big powers like China and the United States fight, admittedly, nearly everyone else suffers – especially small states whose exports account for a high percentage of GDP.

Still, while there is currently much hand-wringing around the world about tepid GDP growth, the dramas of global economic cycles hardly deserve to monopolise public attention and policy intervention.

WHY GDP IS NOT A GOOD MEASURE OF NATIONAL GOALS

For one, GDP itself reflects an economic model based on unsustainable and inequitable foundations.

Between 2008 and 2019, the United States went through the longest period of economic expansion, as measured by GDP, in its history.

Despite this growth, the country is now experiencing its highest levels of income inequality in 50 years, an enduring opioid crisis, and increasing rates of suicide and so-called “deaths of despair”.

GDP – the preeminent comparative measure of development – draws attention away from social and environmental issues that are crucial to human well-being. 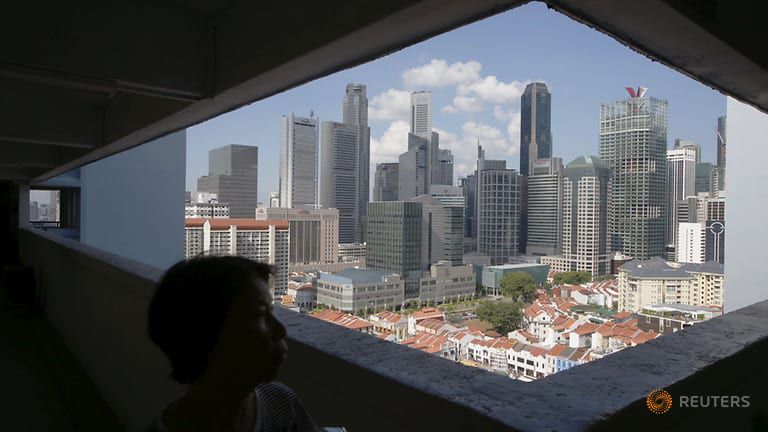 Credited with first establishing the idea of GDP, Nobel prize laureate Simon Kuznets made clear decades ago that the measure concerned only economic production and not human well-being.

However, commentators and policymakers routinely conflate the two, with the troubling consequence that governments focus on economic output to the exclusion of welfare issues in measurable and unmeasurable forms.

IN INDIA, WHERE PROMISES OF GROWTH OBSCURE CHALLENGES

The pitfalls of this approach can be seen in India, where Prime Minister Narendra Modi’s government rode to power promising higher GDP growth.

The administration has endeavoured to realise this promise by strengthening the country’s fiscal position through demonetisation and the 2017 introduction of a consumption tax.

However, these policies have disproportionately impacted informal sectors, raising costs of business and threatening the livelihoods of millions of lower-middle class and poor workers.

Adding to the confusion is the Modi administration’s publication of potentially misleading statistics. The country’s stated 7 per cent yearly GDP growth rate was later said by the government’s former Chief Economic Advisor to be overestimated by more than 2 percentage points.

India is not alone in such data anomalies. China also faces questions about the quality of its economic data, including the overstatement of yearly GDP growth by 2 percentage points between 2008 and 2016. 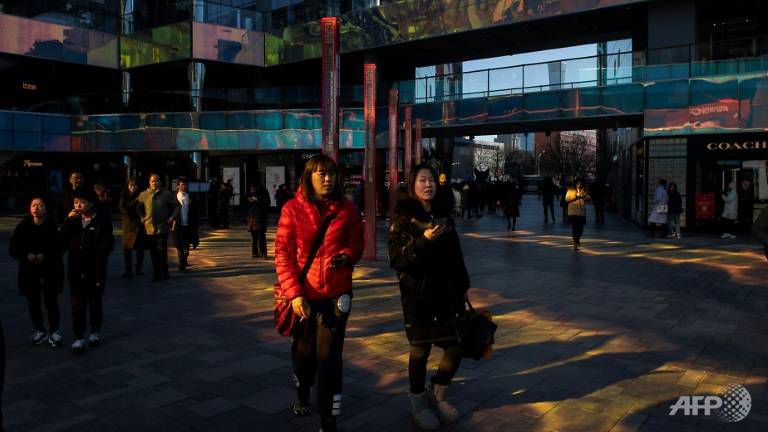 Such phenomena have been attributed in part to political pressure; economic data are often collected by local government officials whose job security and promotion are tied to economic growth.

For many rapidly growing countries, China included, the excessive focus on GDP is a priority that filters down to all levels of government.

Economic growth is also a source of international prestige. GDP estimates by global institutions such as the International Monetary Fund are treated as a horse race in which the winners attract foreign investment and command greater geopolitical influence.

China is emblematic of the grow-now-develop-later mindset.

According to World Bank data, China now has the highest GDP in the world at purchasing power parity.

Yet, the country faces substantial environmental and public health costs from pollution, along with unsustainable levels of household debt – two of many challenges concealed by a slavish focus on GDP growth.

For the governments of China, India, and many other countries, these outcomes are no surprise; economic growth is the primary source of political legitimacy. 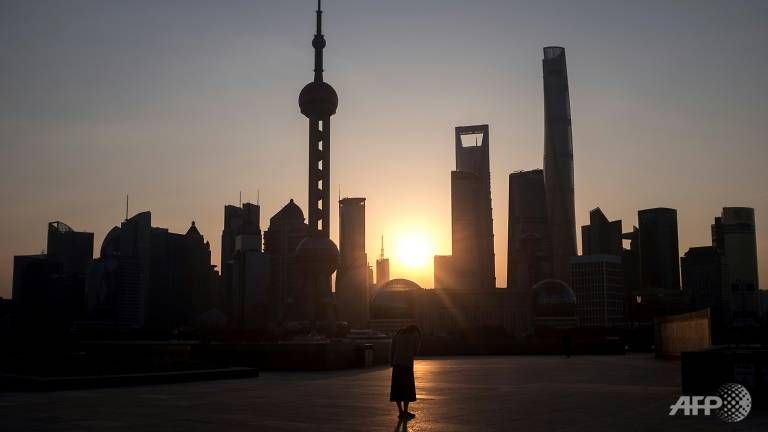 China’s economy expanded at its slowest pace for nine years in the third quarter of 2018. (Photo: AFP/Johannes EISELE)

Part of the problem with using GDP as a measurement of economic success is that it doesn’t quite measure what citizens feel are important. Such economic metrics are typically focused on output, and can be immediately and straightforwardly measured.

But desired national outcomes are typically more distant in time. These can also be impacted by numerous intervening factors within and outside the scope of public policy.

Many publics around the world want better. There is growing dissatisfaction about lax consideration for long-term outcomes in policymaking.

One example is the climate action movement, seen in recent protests and strikes by young people around the world.

Pressure to find a replacement for GDP has yielded several alternatives, including the OECD’s Beyond GDP initiative and the ecological and socially focused Genuine Progress Indicator.

Country-level efforts can also offer globally scalable alternatives. Within New Zealand’s Living Standards Framework, the definition of capital is broadened to include environmental, human, and social capital and is applied to the preparation of a “well-being budget” that targets child poverty, mental health, and wealth inequality.

Other alternatives, such as the notion of Green GDP pursued by China and others, have gained less traction.

Efforts to mainstream a new way of viewing GDP, if used to compare countries, have the potential to shame underperformers – dampening prospects of full and universal participation.

Some countries might also lack the capacity to measure softer aspects of growth and development. 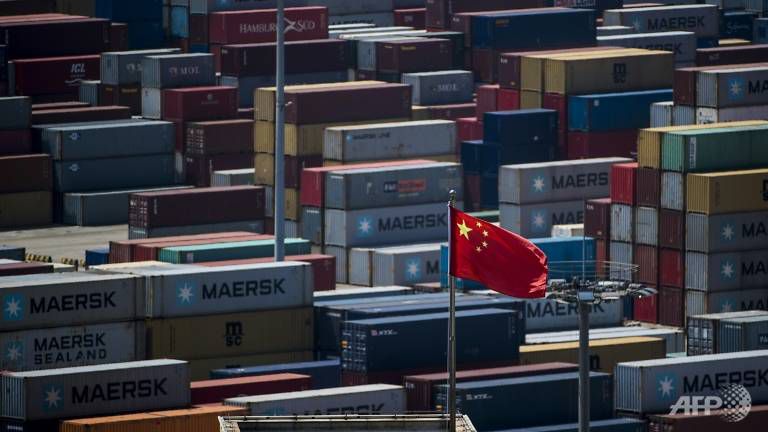 China and India will together account for more than half of the growth in energy concumption, though China will remain the largest market AFP/Johannes EISELE

TOWARDS A FRAMEWORK COUNTRIES CAN AGREE ON

One path towards a comprehensive framework is the UN Sustainable Development Goals. Adopted in 2015, the SDGs include 17 social, economic, and environmental goals specified by 232 indicators.

Measuring SDG indicators in a way that is meaningful for global comparison requires high-level universal reporting standards and guardrails to prevent gaming.

Additionally, implementation of SDGs must consider practical challenges facing local policymakers, who must interpret metrics based on unique conditions and capacity constraints. Metricising development can also lock policymakers into a “streetlight” perspective that focuses efforts only on what can be measured.

WHY GDP CONTINUES TO BE THE METRIC FOR GROWTH

So maybe we’re back at square one. GDP is an imperfect metric, as its inventor stated decades ago. However, it continues to be used as a benchmark for national performance and for policymaking in an era of social, economic, and environmental disruption.

While there is a movement to find development metrics to replace GDP, these too are at risk of falling into the same streetlight effect and one-size-fits-all traps as GDP itself.

Countries must consider their own practical realities as they develop alternative measures, and analysts must be mindful of national-level capacity and political constraints.

Broadly, sweeping indices like the World Happiness Report can draw casual public interest to social well-being; indeed, Singapore’s 34th rank in the 2019 index could be cause for discussion given the country’s top-10 position in GDP per capita.

At the same time, more substantive indices regarding sustainability and social progress address detailed issues with which national policymakers can engage on issues beyond economic growth.

Ultimately, the difficult work of understanding and confronting the 21st century’s complex mix of policy challenges does not excuse governments from the urgency of looking beyond GDP growth.

This article was published by CHANNEL NEWS ASIA, November 29, 2019.