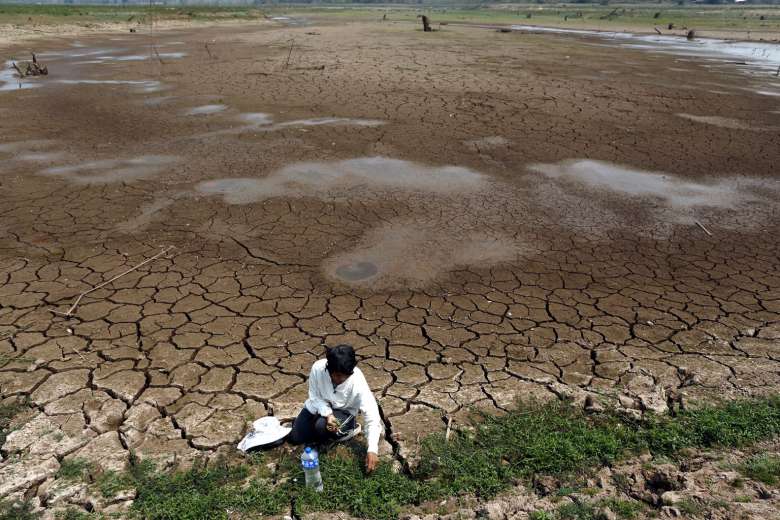 A deal to steer the world away from catastrophic climate change was struck last December, and the goal is to limit global warming to under 2 deg C above pre-industrial levels. Nations have until April next year to sign it, and Singapore will do so in New York next month. But even as the world moves to cut the use of fossil fuels and curb greenhouse gas emissions, it is experiencing the escalating effects of climate change. The Straits Times launched a four-part series in its Science pages on March 4 to highlight aspects of climate change, ranging from its effects on habitats to measures that cities take to mitigate the effects of prolonged rain or dry spells. Today, in the final part of this weekly series, we look at the effects of climate change on something close to the hearts of Singaporeans: food. Study predicts more intense and frequent variations in global food production due to climate shocks.

Climate change has brought with it floods, droughts and heatwaves. Equally hard to swallow: how the changing weather patterns are hitting food supplies.

Countries like Singapore, which produce only a fraction of their own food, may be able to cope in the short term, but need to brace themselves for harder times ahead.

In the coming years, supplies from Thailand’s rice bowl in the north-east could shrink, and fish could swim away to cooler waters, for instance.

A recent study by the Nanyang Technological University’s S. Rajaratnam School of International Studies (RSIS) noted that variations in food production around the world due to climate shocks are likely to become more intense and frequent.

The report said that by 2030, for example, rice production in north-eastern Thailand could be reduced by up to 17.8 per cent due to flooding and storm surges.

Fish catch potential in the waters of South-east Asia could also shrink by up to 60 per cent, as fish migrate away from the Equator to escape warmer oceans and increasingly acidic waters.

Vietnam’s southern Mekong delta – the rice basket of the country – is reeling from the worst drought to hit the country in nearly a century, and it is expected to hit rice harvests hard.

Dr Cecilia Tortajada, a senior research fellow at the National University of Singapore’s Lee Kuan Yew School of Public Policy, noted that as Singapore’s food supply is sourced from around the world, supply disruptions due to climate change may not be as severe as for other countries that produce their own food.

“If food from one source does not come, either due to climate change issues or other local problems, such as disruptions at the farm level, Singapore can source its food from other countries,” Dr Tortajada told The Straits Times.

Local produce now meets less than 10 per cent of Singapore’s food demand, and the country imports the rest from countries such as Malaysia, Japan and even Brazil.

But Dr Jonatan Lassa, a research fellow from RSIS’ Centre for Non-Traditional Security Studies, who was involved in the study, pointed out: “Success today may not translate into success tomorrow.

Thinking about climate change is about anticipating food production in 2030 and beyond, and importers should be mindful of diversification that includes climatic context.”

This is because in times of production failure, exporting countries will prioritise local markets and needs.

The paper gives recommendations for importing countries such as Singapore to increase food security in the long run.

These include investing in food stockpiling, processing and storage systems so that more food can be kept longer, as well as greater consideration of climatic zones for food diversification policies.

The scientists pointed out, for instance, that although Singapore imports fish from 46 countries, more than 80 per cent comes from South-east Asia.

Dr Tortajada said that investing in the supply chains of emerging producer countries, such as those in Sub-Saharan Africa – which has the resources but is not yet a major exporter – is another option.

“Sub-Saharan Africa could become the bread basket of the world, and that is why the world is interested in the governments (of the countries in Sub-Saharan Africa) to further strengthen their institutions and policies there, because there is land, water and sunshine,” she said.

An Agri-Food and Veterinary Authority of Singapore (AVA) spokesman said Singapore has in place measures to ensure a resilient supply of safe food, such as helping to raise the productivity of local farms and a diversification strategy to import food from various countries.

“However, we recognise that understanding and building resilience to the effects of climate change is an ongoing effort,” she added.

“AVA will continue to review current measures and develop new ones to help Singapore prepare for long-term climate change impacts on our food supply.”

This article was published by THE STRAITS TIMES, March 25, 2016.