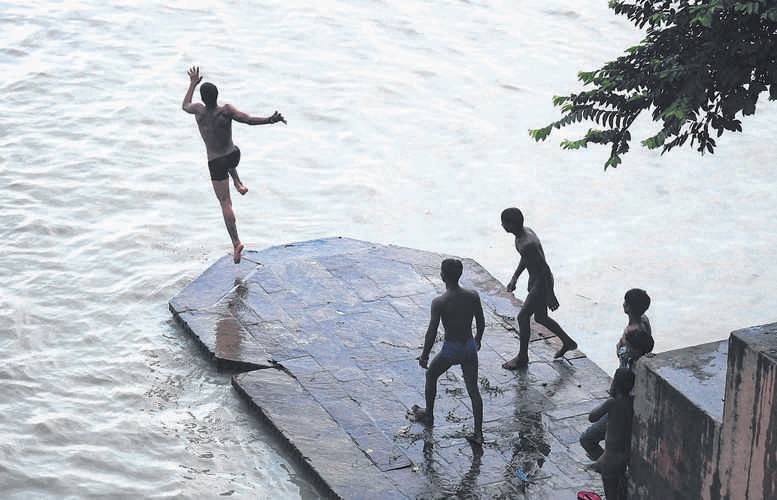 No child’s play: One of the objectives is to improve commercial activities, including navigation as well as tourism, but what are the critical or long-term sustainable requirements? Such specific questions have not yet been properly framed, let alone answered. PHOTO: AFP

It is Mother Ganga who has called me. I feel the same way a child feels when he is back in his mother’s lap,” so said Narendra Modi while filing his nomination as a candidate for election in Varanasi in May. “Today Ma Ganga is calling us, her children, to make the river clean once again.”

This is the first time in recent history that an Indian Prime Minister has shown sustained interest in cleaning up the Ganga, a national pride, an important religious symbol and a major lifeline to hundreds of millions of people.

After his election, a host of announcements and activities have followed. Sadly, before undertaking such a herculean task, the Indian government did not draw any lessons from past futile attempts to clean up the river. Present endeavours for restoring Ganga are similar to what has been done before.

The Ganga clean-up is not a new initiative. In 1986, the Ganga Action Plan (GAP) was launched with great fanfare by then Prime Minister Rajiv Gandhi. Since then, through subsequent governmental regimes, hundreds of millions of dollars have been spent and Ganga has literally become dirtier by the day.

The Comptroller and Auditor General of India did identify many reasons for this dismal failure. Among these were bad planning, poor execution, extensive corruption, absence of co-ordination between Central and State organisations as well as between the States themselves. In addition, for any plan to succeed, it has to be future-oriented. India is changing rapidly. Hence, prospective plans should look into future trends as to how the nation’s water requirements in various sectors will change in the coming decades as well as what are likely to be the nature of wastewater discharges into Ganga. Any static plan – like those tried in the past, or being planned at present – is unlikely to succeed.

Take the case of the Singapore River clean-up. Even though it is in no way comparable to the Ganga, an important lesson could be learnt from its restoration efforts. There was strong and sustained political will. Singapore today enjoys the benefits of a clean river as well as extensive economic activities along its picturesque riverfront. All these were possible because then Prime Minister, Lee Kuan Yew, took a personal interest. He gave the Public Utilities Board 10 years to complete the project and demanded monthly progress reports that were carefully reviewed. True to Singapore style, the project was completed within time and within budget. The main lesson of the cleaning up of Singapore River is that it is actually very expensive to live dirty and significantly cheaper to live clean. The cost-benefit ratio of the Singapore river clean-up is highly positive for the country.

India first needs to define the goals of the Ganga clean-up. Does this mean that the river water quality throughout its 2,525 km stretch will be improved to bathing quality, or is it only within patches of a few tens of kilometres in and around important cities like Varanasi? The final objectives of the effort are yet to be defined explicitly. For example, one of the objectives is to improve commercial activities, including navigation as well as tourism, but what are the critical or long-term sustainable requirements? Such specific questions have not yet been properly framed, let alone answered.

Much has been said about dredging the river to make it navigable. Dredging hundreds of kilometres of the river would be an extremely expensive process. Moreover, this has to done at regular intervals since river beds will continue to silt with time, as there is very little control of land use practices. Even if Ganga is successfully widened and deepened, will it have sufficient water for continuous flow during lean periods, after water allocations to various uses like agriculture, dams and barrages upstream? Dredging might result in increased river flow during monsoon months, but it may also contribute to faster and more dangerous floods downstream.

Dredging would also cause substantial disturbance to the delicate riverbed eco-system. Equally, we have no idea as to what pollutants the Ganga silts contain after decades of uncontrolled municipal and industrial wastewater discharges and extensive leeching of pesticides or chemicals from agricultural areas. The silts are bound to contain hazardous chemicals along with heavy metals. Where will such hazardous materials be deposited?

Experiences from China might be salutary. At present, 20 per cent of China’s arable land has been seriously contaminated due to poor wastewater management. Similar mistakes in India would have major implications for the nation’s food security. These are complex inter-related issues which require considerable further research and serious reflections before final decisions are made.

Construction of barrages at every 100 km too needs further thought. It is not clear though how the proposed tourist shikaras would sail along the Ganga through those barrages. Barrages may be a good way to hold surplus water, but in India, which suffers from unpredictable monsoons, dry period flow is a major concern. The construction of Farakka Barrage has not achieved its major purpose of preventing siltation of the Hooghly River. Hence thorough cost-benefit analyses as well as environmental and social impact analyses need to be conducted before announcing structural policy prescriptions.

Sanctioning more sewage treatment plants would not yield any sustained long-term benefits unless they are properly planned, managed and operated. Central Pollution Control Board of India evaluated 64 such plants. They found that most of those are being under-utilised, or non-functional or yet to be completed. Continuous electricity is essential for their proper functioning. This is mostly lacking in many places. In addition, the country at present does not have enough trained operators for such plants, let alone manage a large number of additional new plants. Unfortunately, the country still does not have effective institutions where operators can be adequately trained.

There is no question that Prime Minister Modi has the right intention for cleaning up Mother Ganga. All of India’s rivers, lakes and aquifers around major urban centres are now heavily polluted. This has major implications in terms of people’s health as well as social and economic consequences. If existing trends continue, as population increases, urbanisation intensifies and economic activities accelerate, the situation will continue to worsen. Reliable estimates of how much water pollution is costing at present are not known. An informal estimation could be around 4-6 per cent of the country’s GDP.

While the need for cleanups of rivers like Ganga is real and urgent, it must be done carefully with proper knowledge, good understanding of inter-sectoral inter-relationships between water, land use, industrial and agricultural developments along with social, religious and environmental considerations. Each of these aspects affects the other and, in turn, is affected by others. If a proper framework for the clean-up is not correctly formulated, the country could spend another few billion dollars and yet its rivers would be more polluted than ever.