It needs proper emphasis, as no country can reach its full potential if the bodies and minds of its youth are stunted because of lack of nutrients. 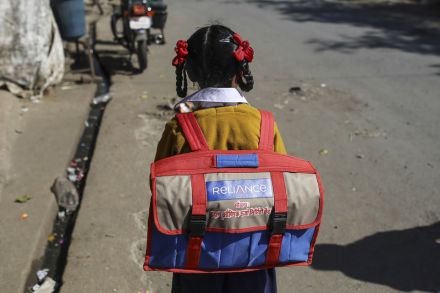 Obesity has now become a global problem. But in India, the situation has improved. A decade ago, 42.5 per cent of all children below five were underweight. Now it is 29.4 per cent. There are of course wide variations over the country. PHOTO: BLOOMBERG

GLOBAL food and nutrition security is an important issue to consider, both for now and also for 2050 when the world population is likely to reach 9.6 billion from 7.3 billion at present. This means enough nutritious food should be available for an additional 2.3 billion people within the next 35 years. In addition, provision has to be made for 795 million people, about one in nine of the global population, who currently do not have access to adequate food to lead a healthy active life.

India -which is likely to be the most populous country of the world by 2022 with a population of 1.4 billion- produces enough food to combat hunger. However, poverty, creaking supply chains, rampant food waste and poor farming yields lead to millions being malnourished. The existing underperforming policies need to be reviewed and reformulated.

India currently has 194.5 million malnourished people, or about one in every four such people of the world. Between 1990-92 and 2015, this number was reduced by only 15.5 million. This is in spite of the fact that per capita income has more than tripled during the past two decades.

Despite economic growth and self-sufficiency in food-grains production, minimum dietary intake has fallen during this period. China, over the same period, has managed to reduce the number of its malnourished people from 289 million to 133.8 million, a significant achievement.

Global food security can be achieved in the coming years with the implementation of proper policies, strong political will, continued advances in science and technology, and good agricultural and food management practices. This piece will focus primarily on nutritional security, which has not received similar levels of attention. There are two important aspects of nutritional security: obesity and malnutrition. Globally, there has been a steady increase in the number of obese people. Equally, in developing countries malnutrition remains a very serious concern.

According to the US Centers for Disease Control and Prevention, 34.9 per cent of American adults are now obese. In 2014, adult obesity rates exceeded 30 per cent in 22 states, and not a single state had a rate below 20 per cent. In contrast, not even a single state had a rate of 20 per cent in 1991. Obesity contributes to heart diseases, strokes and type-2 diabetes. Estimated annual medical costs of obesity in the United States is US$147 billion in 2008 dollars. Medical costs for obese people are US$1,429 higher than those of normal weight.

Obesity has now become a global problem. There are twice as many obese people in developing countries as in developed ones. Increased consumption of food with high sugar and saturated fat contents that is nutrient-poor and energy-rich, as well as reduced physical activities, has contributed to a three-fold increase in obesity rates in some parts of the United States, UK, eastern Europe, Middle East, China and Australasia.

Increasing rural-urban migration in developing countries is aggravating obesity. Rural people are self-reliant in obtaining food and eat traditional diets that are rich in grains, fruit and vegetables but low in fat and sugar. When they migrate to urban areas, they typically reduce their level of physical activity and increase their intake of sugar, refined grains and fats.

Their dietary profile moves from traditional and more nutritious diets to a more aspirational urban diet. Communication and information revolutions have contributed to globalisation of an aspirational, ill-conceived “Western” diet after 1980.

The labour practices of a migrant often account for a decline of as much as 1,000 calories a day, a reduction in 50 per cent or more of physical activity. This reduction and change in diet results in weight gain and thus obesity.

In terms of nutritional security, numerous developing countries are facing an equally serious problem in terms of malnutrition. According to United Nations estimates, some 795 million people in the world, one in every nine persons, do not have enough food to eat to lead a healthy life. Nearly two-thirds of the world’s malnourished people are in Asia. However, the highest prevalence rate is in Sub-Saharan Africa, where one in four is malnourished.

Some 3.1 million children under five die each year due to poor nutrition, accounting for 45 per cent of child deaths. One in four children is stunted (short for their age) and one in six is underweight.

In India, a decade ago 42.5 per cent of all children below five were underweight. The situation has now improved. Now it is 29.4 per cent. There are of course wide variations over the country. A state like Maharashtra has been doing better, reducing underweight children from 37 per cent to 25 per cent by better and more frequent feeding, improved care of pregnant women, increasing household incomes and higher ages at which women start having children.

What is noteworthy is even among the richest fifth Indian households, more than a quarter of the children are stunted. Over 50 per cent of girls in the 15-18 age bracket have a low bodymass index. This implies they are likely to have undernourished babies themselves, and the cycle may continue.

The problems in the developing world are not only because of malnutrition, gender discrimination, poor health education and literacy, but also other public health factors. For example, open defecation is still widely practised in many countries. This contributes to an unhealthy environment where children live and play.

Open defecation spreads diarrhoea and other diseases, as well as worms and parasites. These make it difficult for children to absorb nutrients even when food is plentiful. The evidence shows strong correlation between open defecation and underweight children.

China has made remarkable progress in combating malnutrition. The just-released 2015 Report on Chinese Nutrition and Chronic Diseases, based on data from 2002-2012, shows adult malnutrition was 6 per cent in 2012, a decline of 2.5 per cent over a decade. Stunted growth for children and adolescents between six and 17 years was 3.2 per cent, a reduction of 3.1 per cent over the decade.

Anaemia has historically been a serious problem in China. This showed remarkable reduction, from 20.1 per cent to 9.7 per cent during the decade. Malnutrition, however, continues to be serious in rural areas.

A commonly-held erroneous view has been that food security is the main, or even the sole, cause of malnutrition. Thus, the policy focus to ensure nutrition security has often been based primarily on food-based interventions. This has not been very effective.

Countries need to give proper emphasis to nutrition security based on observed facts and analyses. In most developing countries, progress in achieving nutritional security has been slow because of misconceptions, gender discrimination, corruption, taboos and national prides. No country can reach its full potential if the bodies and minds of its young people are stunted because of lack of nutrients.

Peter Brabeck-Letmathe is chairman of the board of Nestlé, Vevey, Switzerland. Asit K Biswas is distinguished visiting professor at the Lee Kuan Yew School of Public Policy, Singapore.