Floods in Asia: Lessons to be learned from Thailand 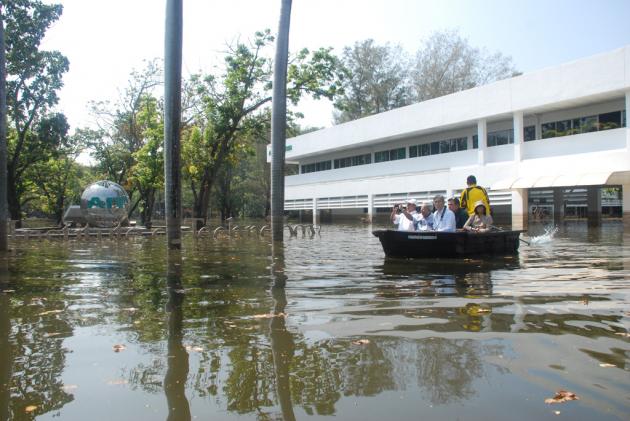 The economic damage has varied significantly – minor in Singapore but very substantial in Thailand.

The floods have once again brought the twin issues of disaster management and development to centre stage. With climate change and its effects expected to increase the magnitude of water-related disasters, it is important to rethink why some of the current flood disasters turned out to be unmanageable, with unprecedented human and material losses.

Flooding is older than humankind, and water, whether in excess or in scarcity, has always been of concern to humans, going back to the biblical tale of Noah’s Ark.

Important civilisations emerged on the banks of major rivers like the Nile, the Tigris-Euphrates and the Ganges-Brahmaputra, for the availability of water and fertile soils assuring plentiful food. With the Industrial Revolution and urbanisation, the emergence of cities became an important trend. However, living on riverbanks leads to problems. Historically, for Asia, floods have been a regular and integral component in the life. Because Thailand’s recent floods inflicted such social, economic and environmental costs, it is necessary to reflect on the problems and lessons learnt, so that the situation is not repeated in Thailand or other Asian countries.

Bangkok is built on the banks of the Chao Phraya, and its existence is intimately linked with the river. The city benefitted from the river, its fertile delta and its port, and has emerged as an important economic and commercial hub. Experience taught the people of Thailand a resilience that should be saluted. Traditional houses were located at the edges of canals and were constructed on wooden stilts. However, new concrete housing abandoned the use of stilts. The casting away of this centuries-old tradition to be replaced by modern construction practices – but without adapting them to local conditions – was the first mistake.

Industrial estates in Thailand have been hit the hardest. Over 800 factories in seven estates have been affected. Computer hard disks, a quarter of which are produced in Thailand, are already seeing an increase in price globally. The automobile sector is also witnessing production cuts. The country’s economic growth forecast has been reduced from 4.1 per cent to 2.6 per cent by the Bank of Thailand. The cost of the disaster has been conservatively estimated at US$44 billion. It is now estimated that $72 billion will have to be invested for flood protection infrastructure, without which investors are not likely to return because of possible future flood threats and the availability of other investment locations.

It is not just the industrial losses that are worrisome. It is the human dimension of the disaster that will have repercussions for a prolonged period. The flood put 660,000 jobs at risk because of factory closures. Already there is talk of some industries moving to other countries.

The loss in human life went beyond the 500 mark. The tragedy is that development is supposed to be for the benefit of the people; however, people for whom this development was undertaken were left submerged.

The third mistake was thus an unsustainable development model that primarily considered short-term financial benefits but not long-term social and economic costs.

The fourth mistake was the type of research that has been undertaken by institutions and universities. How is it that so many scientists and scholars failed to forecast the arrival of the flood disaster? Is it because they have been constructing and playing with artificial models that have little relevance to reality? Or is it because they knew but did not speak out for various reasons? Either way, it has been an expensive mistake, resulting in serious human costs.

The first lesson from this sad episode is that disasters happen when we do not have enough resilience to absorb the impact of a hazard. Hazards are exogenous but disasters are endogenous. Hence, while flooding is a hazard, our inability to cope with the consequences of floods contribute to a major disaster.

The second lesson is the need to incorporate a holistic perspective in development planning . Land use, urban development, industrial activities and water management must be coordinated. Geographers know that specific terrain is suited for certain activities. Thus, land use plans must be properly prepared and strictly enforced.

The third lesson is the urgent need for institutional reforms. Neither the government nor public could say which institution was ultimately responsible. Various authorities had different views on flood management and took contradictory positions. Contradictory statements came from different institutions, which confused the public. There has to be a consistent and realistic strategy for the Thai authorities to manage floods effectively and promptly.

The fourth lesson is that scientists have been working mostly on theoretical problems, which have little relevance to reality. Scientists have to get out of their air-conditioned offices, look at the real problems and find implementable solutions. Real-life problems cannot always be simulated on computer. Simulating models and publishing research papers that have little relevance indicates a failure from a societal and scientific perspective.

The final lesson is that as Thailand begins its rehabilitation effort, it should not only include reconstruction of infrastructure but also restoration of the trust and confidence of the people. We need to continuously learn from mistakes and prepare for a better future. The fact that Thailand had been able to ward off previous disasters was primarily due to good fortune. The country may not be so fortunate next time.

Said Irandoust is president of the Asian Institute of Technology, Bangkok. Asit K Biswas is founder of the Third World Centre for Water Management, Mexico, a member of the International Advisory Board, AIT, and distinguished visiting professor at the Lee Kuan Yew School of Public Policy, Singapore.