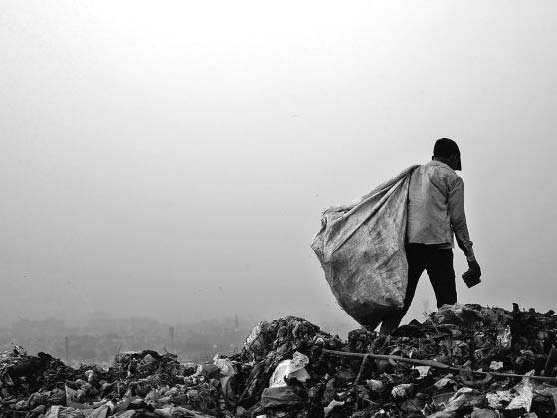 The United Nations has said the world population is expected to increase to 9.2 billion by 2050 from 6.8 billion today. The UN further estimates that about 870 million people, the vast majority of whom live in developing countries, were chronically undernourished during the 2010 to 2012 period. Thus, a fundamental challenge is to not only eradicate hunger globally, but also ensure every person continues to have sufficient quantities of nutritious food.

The United Nations has said the world population is expected to increase to 9.2 billion by 2050 from 6.8 billion today. The UN further estimates that about 870 million people, the vast majority of whom live in developing countries, were chronically undernourished during the 2010 to 2012 period. Thus, a fundamental challenge is to not only eradicate hunger globally, but also ensure every person continues to have sufficient quantities of nutritious food.

The challenge is complicated by two issues. First, with the communication and information revolution, aspirations and expectations of people all over the world have steadily increased during the past three decades. The rich, the middle class and even the poor expect their future standards of living to be higher than today’s.

Second, by 2050, almost three billion more people will join the world’s middle class. This is commonly defined as someone who earns or spends between US$10 (S$12.50) and US$100 per day in the developing world. This means that by 2050, more than 43 per cent of the world’s population would be classified as middle class — the highest percentage of such people in human history. The Food and Agricultural Organization of the United Nations (FAO) has estimated that the global demand for meat, milk and eggs will increase by 60 per cent by 2050.

If the world cannot feed its population now, can it meet the food demands of another 2.4 billion people, with more rising to the middle class? At best, it can find 20 per cent more arable land that can be cultivated. Previous policies of increasing food production to meet rising demand will not work due to water and land constraints.

WHAT A WASTE
If we think outside the box, many solutions to solve the world’s future food problems already exist. One area that has received very little attention so far from policymakers and consumers is food losses or wastage. The FAO has said nearly one-third of food produced every year is either lost or wasted. In other words, every year, nearly 1.3 billion tonnes of food, with a market value of around US$1 trillion, is wasted.

In 2009, Americans threw away a staggering 33 million tonnes of food. This made it the largest component of solid waste in municipal landfills and incinerators in the United States. It costs the US nearly US$1 billion each year to dispose of its food waste.

The countries of South and South-east Asia produce less food per capita than the industrialised nations of the West, but they waste roughly the same proportion: 33 to 35 per cent. Even in tiny Singapore, which imports more than 90 per cent of its food supply, about 796,000 tonnes of food were thrown away last year. This was a sharp rise of 13.3 per cent from 2012.

In industrialised countries, much of the losses occur at the supermarket and consumer levels. This is partly because food as a percentage of household income in the West has steadily come down, especially when compared with the housing, energy and transportation costs that have continued to increase.

The situation is different in the developing world, with losses occurring during and after harvest as well as at the distribution stages — all well before supplies reach buyers. Take India, the world’s second-largest producer of fruits and vegetables. It loses about 40 per cent of this production because of mismanagement, inadequate infrastructure and storage facilities, poor transportation, shoddy supply-chain logistics and poorly-developed markets. It also loses more than one-third of its cereal production.

In the United Kingdom, it is estimated that 15 million tonnes of food were thrown away in 2011, more than half of which were from households. This includes more than two-thirds of salad vegetables, four out of 10 apples and just under half of baked goods. Retail giant Tesco estimated that its branches generated 28,500 tonnes of food waste during the first half of last year. An average British family throws away £700 (S$1,490) of food every year.

NEW FOOD CULTURE NEEDED
The global food problem cannot be solved without a significant reduction of losses. Fortunately, governments and consumers are slowly becoming aware of this problem. There are also some low-hanging fruit that can reduce waste significantly.

For example, the European Union is likely to discard compulsory “best before” labels for rice, dry pasta, coffee, hard cheeses, jams and pickles. Currently, all food sold in EU countries must have “best before” labels, regardless of whether products could be potentially dangerous, such as raw meat or eggs, or whether they have a long shelf life, such as frozen, dried or canned goods. But food that has a long shelf life, such as rice, coffee or Parmesan cheese, might change colour or texture or deteriorate in flavour, but they remain safe to eat unless obviously otherwise.

The change in labelling is expected to reduce food waste in EU countries by 15 per cent. It is essential to develop a new food culture among consumers and supermarkets as well as restaurants, where an average of 30 per cent of food served is left uneaten. Developing a new culture and awareness of food waste problems will be an important challenge to solve the world hunger problem.

In environmental terms, eliminating food waste will reduce the global agricultural water footprint by about 250 cubic kilometres and save production in around 1.4 billion ha of land. In addition, as we stop the wastage of food currently produced but not eaten, the resulting change in land use will reduce carbon dioxide emissions by 3.3 gigatons in one year. This means food wastage losses are now the third-largest emitter of carbon dioxide in the world, after the US and China.

Viewed from any direction, reducing food waste not only goes a long way in solving the world’s food problems, but also contributes to significant improvement in the global environment.