Water governance and planning are areas where Singapore can make tremendous contributions to the world. 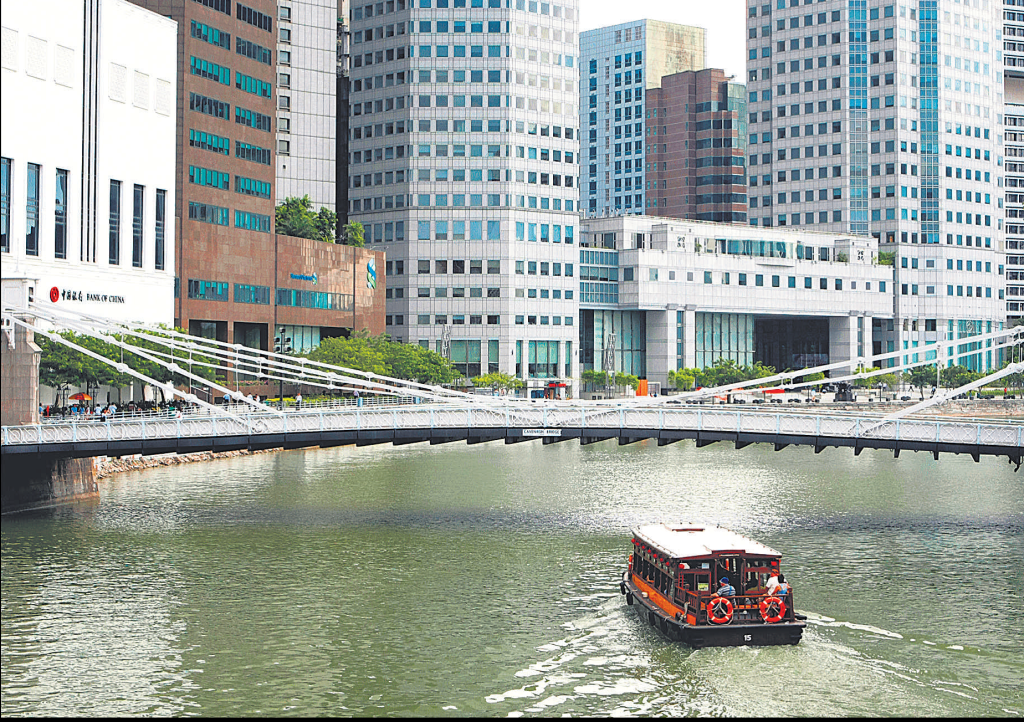 River cruise: Today, 25 years after a decade-long clean-up, the Singapore River is flanked on both sides by retail shops, eating outlets and posh residences.. Back then, however, it was a
noxious, polluted and highly visible reminder of how backward the country really was in terms of key infrastructure and environmental management

AS SEPTEMBER creeps up quietly on us, a little-known anniversary will come to pass with no particular fireworks – next month is the 25th anniversary of the cleaned-up Singapore River.

In an age where more people areliving in cities, and more rivers flowing through these cities are used as open sewers and convenient rubbish dumps, the story of the Singapore River deserves to be told, and told loudly, especially as only two other rivers in the world had a similar clean-up: the Thames in the UK, and the Cuyahoga in the US.

In Singapore, the idea of a clean-up came in the mid-1970s, when the island had already left its fishing village image far behind. It was shaping up to be a bustling metropolis, with several tall buildings in the financial district and the buds of an industrialisation programme in Jurong.

But the Singapore River, running through the heart of financial and commercial area, was a noxious, polluted and highly visible reminder of how backward the country really was in terms of key infrastructure and environmental management.

Today, 25 years after a decadelong clean-up, the Singapore River is flanked on both sides by retail shops, eating outlets and posh residences. Riverside property prices have skyrocketed.

The gains are not merely social and recreational. As countries with polluted rivers will attest, it is good, hard-headed economic sense to clean up rivers because waste water imposes a tremendous cost in terms of human and environmental health.

For example, the World Bank has estimated that in 2007, the cost of pollution for China was a staggering US$100 billion a year. This figure, from the combined health and non-health costs of outdoor air and water pollution, represents 5.8 per cent of the country’s GDP.

Water pollution, meanwhile, is taking the overall cost of water scarcity to about one per cent of GDP. Cleaning up a river therefore has direct economic benefits in terms of public health and quality of life. At the same time, there are positive externalities such as an increase in property values, improved ecological infrastructure and a greater public awareness and appreciation of a community resource.

The Singapore River serves a powerful demonstration effect, especially for the world where the main water problem at present relates to quality and not quantity.

Accordingly, if a fledgling, developing country such as Singapore, circa 1977, with a per capita GDP of $7,022, was able to clean up Singapore River, so too can other countries.

At the time, it spent $300 million and 10 years in the clean-up. In June, India signed an agreement with the World Bank for a US$1 billion loan to clean up the river Ganges. One third of the country’s people live along its banks.

This is not the first time India has attempted to do so. Water specialists have already said that cleaning up the Ganges is an effort that will take
decades.

It will need far more than US$1 billion. It will also need strong and sustained political will and improved water governance all over the Ganges Basin.

But India is making a start, which is important since all water bodies in and around urban centres of the developing world are now already seriously contaminated. The water quality situation is steadily deteriorating.

Singapore itself should remember the river clean-up, if only to refocus the water industry here on its expertise and competitive edge in the niche areas of river quality improvement, better water governance and functioning and efficient institutions.

During the Singapore International Water Week last month, Finance Minister Tharman Shanmugaratnam noted that the National Research Foundation (NRF) has a total of $470 million committed to research and developmentin the water sector.

This money is meant to help achieve Singapore’s goal of growing the value-added contribution from the water-related sector from $0.5 billion in 2003 to $1.7 billion by 2015, and doubling jobs in the sector to 11,000 by then.

Contrary to the widespread belief that urban water management in Singapore has become one of the best in the world primarily because of the use of advanced technology, in our view, this development has been possible because of good governance, functioning institutions and long-term planning.

Within this framework, technology has played a useful role. Regrettably, in most countries of the world, both developed and developing, water governance and planning continue to be poor.

These are areas where Singapore can make tremendous contributions to the world and simultaneously help the economy of Singapore and significantly increase further its employment potential.

This will truly be a win-win situation for Singapore as well as the rest of the world.

By mostly focusing on the “hard” side (technology) of urban water management and not giving enough attention to the soft side (governance, planning and institutions), we believe that Singapore is missing out in maximising its potential in important areas.

Emphasis on the “soft” side will also ensure that Singapore has a chance in becoming the knowledge hub of the urban water world. Singapore’s expertise in governance, planning, policy implementation, and functioning institutions are not the stuff of high technology.

Many cities of developed and developing world badly need such expertise.

These are the factors that enabled the country to clean up the Singapore and Kallang rivers successfully and cost-effectively.

The writers are distinguished visiting professor and doctoral candidate respectively at the Lee Kuan Yew School of Public Policy. Prof Biswas is also the founder and chief executive of Third World Centre for Water Management, Mexico.