Everyone’s water needs could be met 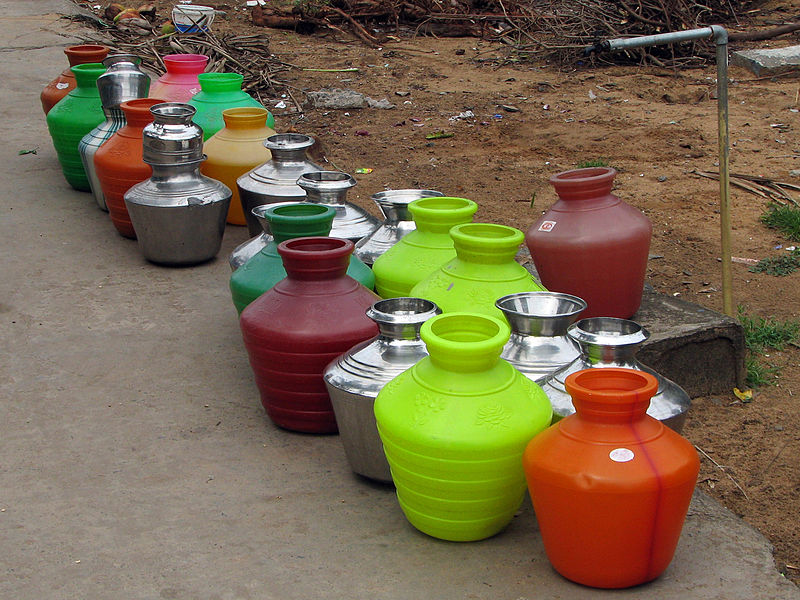 Water pots lined up to be filled at the street tap, India. Wikimedia

At present, water features prominently in the media on a regular basis all over the world. This is often because of too much water (floods, heavy storms and hurricanes), or too little (droughts), deteriorations in quality which makes it undrinkable, or water problems due to natural disasters (earthquakes and tsunamis). Putting “water crisis” in Google brings 12.4 million results. Even ten years ago, the situation was very different.

A decade ago water was not even in the list of 10 major global risks of the World Economic Forum (WEF). Recently, it has been consistently one of the most important global risks identified by WEF. The question then arises: how is it that water transformed itself from a bit player on the world stage to become one of the most urgent issues within a short period of only 10 years?

The reasons are many. Probably most important is that throughout history water has been mismanaged everywhere in the world. Water is a renewable resource. Oil and coal, once used, break down into different components and cannot be reused. Water can be used, wastewater then can be treated and reused. This cycle can continue ad infinitum. When treatment is not done properly, wastewater pollutes water bodies and affect human and ecosystems health.

Unfortunately wastewaters from domestic and industrial sources and agricultural runoffs are often not properly treated or managed. Thus, water bodies near and within urban centres of developing world are now so severely contaminated that their use for domestic, industrial and agricultural purposes often is severely restricted. This is contributing to scarcities of usable freshwater.

There is a second issue that has totally escaped societal consideration. Humans have special emotional relationships with water. All resources are traded within and between countries, except water. If a country restricts import of any resource by high tariffs, exporters take importing countries to WTO for settling of the dispute. In contrast, there is not a single country in the world which exports water to another because of very strong internal opposition. The only way NAFTA was approved by the Canadian Parliament was by explicitly making sure water was not included. It was the only resource that received this special treatment.

In India, not even one province would like to export water to another even though they are in the same country.

Third issue is price of water. Nearly 70% of world’s water is used for agriculture. Yet, there is not a single country that charges its farmers for the amount of water they use. California became a breadbasket by investing billions of dollars in bringing water from outside the state and then allowing the farmers to use it almost free. This is unthinkable for other resources.

Domestic water in most parts of the world is either free or highly subsidized. Consider the Gulf States. They are in deserts, with virtually no rivers and limited groundwater. One would expect that, because of scarcity of water, there would be very efficient water use practices. Nothing is further from truth.

Consider Qatar where most of water comes from seawater desalination. Qatari nationals do not pay for water. An average Qatari uses 1,200 litres per day. In contrast, a citizen of Leipzig or Tallinn uses less than 95 litres per day. In addition, the Qatari water utility loses some 40% of water it produces because of leakages. Cities like Tokyo or Singapore lose less than 5%. Thus, for a Qatari to receive 1200 litres per day, its utility must produce 1680 litres. This is unsustainable.

All developed countries are now trying to replace obsolete water infrastructure after years of underinvestment. There are pipes in USA which were laid some 150 years ago and thus long past their economic lives. Replacing and updating old water infrastructure is a major problem for these countries.

The problem is further complicated by the fact that international organizations like the United Nations and World Bank have consistently downplayed the magnitude of the problems. Even in 2015, they were claiming that “only” 635 million people did not have access to clean water. Stung by criticisms, they have increased the number to 1.2 billion. Even this figure is a gross underestimate. At least 2.5 to 3.0 billion people do not have access to clean water. Less than 15% of population in developing countries have access to proper wastewater collection, treatment and disposal. The problem is more serious than it is currently realized.

There is no question that if the current dismal water management practices continue, by 2030, many parts of the world will face a water crisis that no earlier generation has ever faced because of water scarcities and increasing pollution.

Enough knowledge, technology and experiences are now available to properly manage water so that water needs of all humans, for all purposes, can be met for now, as well as for 2050 when the world population will reach 9.7 billion.

Consider agricultural productivity in India. This is about half of China. If India’s productivity can be increased to same levels of China, the amount of food produced can be doubled with current land and water levels. Also, science and technology are advancing at a very fast pace which will allow much higher productivities with less water.

Looking ahead we are cautiously optimistic of world’s water future. World has enough water for current and future populations. However, crisis we are facing is due to poor management. As intensities of crises increase, politicians all over the world will be forced to change their mindsets. This will herald a “blue revolution” that is urgently needed.

This article was first published in French, by La Vie – Le Monde, 7 November 2017