More diversification of certain food types is needed to ensure steadier and more stable supplies for the Republic. 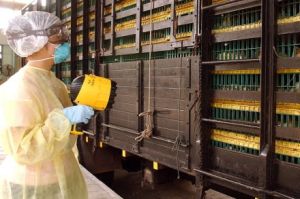 AVA officers inspecting chickens from Malaysia, which supplies about 70% of the eggs consumed in Singapore. FILE PHOTO: THE STRAITS TIMES

LONG-TERM developments such as population growth, urbanisation, steady advances in social expectations and rising per capita incomes have contributed to changes in dietary habits in all countries, especially in large developing Asian economies. All these factors have had significant impact on the patterns of agricultural production and on their global demand.

Studies by the Organisation for Economic Co-operation and Development (OECD) and the United Nations’ Food and Agriculture Organization (FAO) show that the demand for agricultural products globally has expanded rapidly in the past decade, primarily because of increasing need in developing countries. In contrast, consumption in developed countries has remained somewhat stagnant.

In Asia – one of the fastest-growing regions of the world—rapid economic growth and the growing middle class have enabled consumers to purchase a wider range of food and agricultural products. The higher purchasing power of the growing middle class in countries like China and India has heightened the demand for higher-value food products from all over the world. Southeast Asia is no exception. According to the US Department of Agriculture, retail food sales are expected to increase by some 60 per cent in Southeast Asia alone during the next decade, compared to 30 per cent globally.

In terms of food, Singapore is unique. It is one of the world’s most land and water-constrained countries: two resources on which food production depends. Thus, for all practical purposes, Singapore imports nearly all the food it consumes. A pertinent question assessing its performance for the first 50 years is how innovative it has been to ensure food security, and what it may look like in the future.

According to the Agri-Food & Veterinary Authority (AVA), Singapore currently imports over 90 per cent of its food. AVA figures show that in 2013, local farms produced some 4 per cent of vegetables, 26 per cent of eggs, and 5.5 per cent of fish consumed here. Vegetables and fruits come mainly from Malaysia and China, in this order, followed by Australia for vegetables, and the US for fruits. In February 2015, imports of food and live animals totalled S$846.20 million.

In spite of its dependence on food imports and a minuscule agricultural sector, Singapore is considered one of the most food-secure countries in the world. It is ranked the second most food-secure nation after the United States by the Global Food Security Index that assesses affordability, availability and quality of food. According to this index, it surpasses, by far, major food-producing countries like Australia (9th), Malaysia (34th) and Brazil (36th).

Singapore has not faced any major food import disruptions. Its food security has been further strengthened with policies and mitigation measures that have proved to be robust and resilient. These include AVA’s Food Security Road Map that ensures the diversification of food import sources, and the Food Fund that supports local food production. AVA also engages in contract farming with overseas producers to securitise its food imports. A good example of food diversification and securitisation effort is the Sino-Singapore Jilin Food Zone in Jilin, China. It is a food production zone twice the size of Singapore that integrates farming with food processing, storage and logistics. This collaboration aims to ensure the safe imports of fresh and processed pork meat, and thus works to ensure both food security and the safety of food imports for Singapore.

Through the Food Fund, AVA has managed to increase local food production over time. This would help the nation to tide over any period of food disruption. Under the Food Fund, local farms can receive funding to improve farming systems and increase productivity. From 2009, S$30 million has been invested in improving the production of about 70 farms. The increase in investments in new farming techniques like hydroponics has resulted in more efficient use of limited agricultural space in Singapore, resulting in a 30 per cent increase in local vegetation production in 10 years.

The challenges of the extraordinarily resilient city-state could be seen differently with the Rice Bowl Index. This index considers so-called enablers and disablers of food security to assess how robust specific countries are in withstanding potential challenges like disruptions in food imports and the impact of natural disasters on food production and distribution. This index illustrates the vulnerability of Singapore’s food imports, especially during times of crisis in places from where it sources its goods.

Two examples show different situations. First, in 2011, Thailand experienced floods in 9 per cent of the country. The agricultural sector losses were estimated at US$550-708 million and almost 17 per cent of rice land was affected. Even then, rice production was reduced by only 10 per cent and global rice markets were not affected irrespective of numerous statements to the contrary. The country was not (and still is not) the only global rice supplier. The shortfall in Thai rice was made up by other rice-exporting countries, as a result of which global rice prices did not show much disruption.

Singapore was not rice-deprived that year because the grain is imported from Thailand, India and Vietnam. In addition, the disruption of supply from one major rice source was temporarily countered by emergency rice reserves from the Rice Stockpile Scheme. According to International Enterprise (IE) Singapore, this scheme ensures adequate supply of rice in the market as it is mandatory for rice importers to hold a two-month stockpile in government warehouses.

Second is eggs from Malaysia, a completely different story. A disruption of egg imports from Malaysia can be catastrophic as the country supplies about 70 per cent of eggs consumed in the city-state. This illustrates the differences in vulnerability and robustness of food security for different food types. While Singapore has done quite well in ensuring that major food imports are secure, more diversification of certain food types is necessary to ensure a more stable market.

Food security is also about affordability, which might become more critical if food prices increase compared to real incomes. According to the latest Singapore Household Expenditure Report (2012/2013), rising food prices have put a strain on household spending for lower-income groups. In 2014, the Household Income Trend study estimated that about 8.5 per cent of households in Singapore earned less than S$2,000 per month, while almost 10 per cent of households had no income.

The Singapore Centre for Applied and Policy Economics (SCAPE) Project at the National University of Singapore (NUS) states in a 2014 report that the second biggest expenditure for people in the 30th, 40th and 50th income percentiles is food, after housing. The report also notes that income growth has been higher than price increases in food-serving outlets.

BOTH LOCAL AND REGIONAL

To ensure food security in Singapore, policies at both the local and regional levels are necessary. For example, the Asean Plus Three Emergency Rice Reserve (APTERR) established between Asean and three non-members—China, Japan, and South Korea—focuses on improving and increasing rice reserves within the region. However, it is necessary to ensure food security beyond simply securitising rice in the region. Such regional involvements would help the city-state to achieve more sustainable food security as this would complement the existing measures at the national level.

Food security dynamics are very complex. The issue is not only about land, water and natural resources availability or natural disasters; it is also about consumer preferences, global supply chains, technology, policies, and business environments as well as global trade. With robust and changing food demand, global price volatility, fewer exporting countries and more importing ones, Singapore needs to approach the business of food security from a multilevel perspective. This would include national, regional and global actor interests and strategies as well as global trade considerations.

A profound understanding of the changing global environment and possible policy responses will help Singapore to ensure (once again, as it did 50 years ago) that it is able to transform challenges into opportunities—this time in terms of food security for the next 50 years and more.

Dr Tortajada is senior research fellow at the Institute of Water Policy, Lee Kuan Yew School of Public Policy. Mr Thinesh Kumar is a geography student at the National University of Singapore.