A culture of tighter oversight should pervade Nepal’s coming development projects, in both earthquake recovery and transport connectivity. 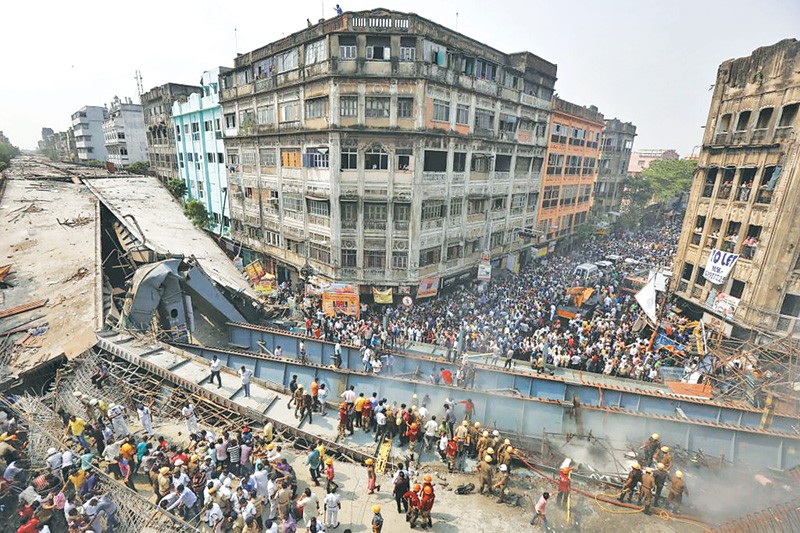 Two recent infrastructure failures—one above ground and one below—tell a story of contrasting growth paths. The collapse of a road flyover under construction in Kolkata, India is drawing attention to corruption and malpractice in developing countries. At the same time, the announcement by Washington DC Metro (subway) officials that the system is suffering from years of deferred maintenance is drawing attention to infrastructure decay in developed countries. In both cases, the underlying causes are poor management and governance, which exacerbate fiscal constraints and physical planning challenges. The Metro case provides a cautionary tale for development catch-up efforts. But are India and other ambitious countries willing to heed these lessons, or will infrastructure continue to fail after and even during construction?

As the world’s two most populous countries, comparisions are made between China and India. In many measures of development there is a yawning gap. Infrastructure is one example. China is proceeding with few glitches to connect its citizens locally through subways and superhighways, nationally through high speed rail, and internationally through gleaming airports. Dams, ports, and skylines are China’s vision of a prosperous future that is arguably already here. By contrast, India’s infrastructure projects suffer from near-permanent delays, budget overruns, and poor planning, stunting the country’s economically vital connectivity and swallowing scarce resources. There are also frequent and lethal structural failures.

The Kolkata flyover tragedy represents a far greater cost than time and money. Nearly 30 people were killed and dozens injured in one shocking and unpredictable instant, a result as much of poor government oversight as of structural failure. While shoddy workmanship can be unnoticeable and inconsequential, the dramatic and widely circulated image of a bridge collapsing onto a street bustling with midday traffic reminds the world of India’s growth pains.

In the wake of such incidents, commentators and government leaders often blame fraud and corruption. The Hyderabad-based contractor IVRCL, blacklisted in 2009 for an incident that killed two workers, has been cited for incompetence and lax supervision in the Kolkata incident; several company officers were arrested on possible charges of culpable homicide. A subcontractor responsible for laying concrete in the severely delayed project was found to lack industry qualifications; coincidentally (or otherwise) the owner is politically connected. Behind the machinations of an opportunistic construction industry sits a political environment rife with kickbacks, a point lost on few political rivals; indeed, recovery efforts exposed a nasty spat over party visibility. Sadly, it is little wonder that contractors flout regulations.

Indian Prime Minister Narendra Modi’s government has made a pledge to improve India’s decaying urban infrastructure through foreign direct investment. The construction industry is the primary beneficiary and—like in most countries—represents one of the most corrupt sectors. Calls for more transparency in campaign contributions are loud and frequent. However, a better place to start would be transparency in the bidding and contract awarding process, including publication of information about not only contractors’ qualifications but also their government connections. This practice could expose conflicts of interest and significant failures of accountability.

While corruption is old news in developing countries, infrastructure decay is old news in many developed countries. In early 2016, authorities in Washington announced that some routes on the city’s Metro system—which boasts the nation’s second highest ridership after the New York subway—could be closed for months for upgrades. The Metro’s problems have been long evident. In 2009, faulty signaling caused a crash that killed nine people and injured 90. In early 2015, a rider died from a tunnel fire. In April 2016, a rapid and disorganised evacuation of two stations was carried out after a suspected mechanical fire. These are among the latest in a series of mishaps that routinely disrupt service and are now eroding public confidence.

The Metro opened 40 years ago to blaring fanfare. The system was expected to improve connectivity in a city famously choked by automobile traffic. Stations were designed with style and grace—in contrast to New York’s dark, dingy platforms. However, the Metro now longs for New York’s service quality. Disruptions like a recent day-long suspension for maintenance checks provide a glimpse of a life without the Metro: Commuters scrambling to learn complicated bus routes, jostling for parking spaces, and shoehorning bike paths into commute routines. More extended disruptions are inevitable and may have a measurable impact on the capital’s economy.

Whose fault is the Metro’s ‘decade-long descent into mediocrity?’ Blame goes beyond corrupt contractors and self-serving politicians; failures are systemic and cultural, reflecting an attitude of deferred sacrifice concerning development. Congress, which largely oversees governance of the nation’s capital city, stubbornly refuses to offer additional financial support. With unfunded pension liabilities and mounting upgrade costs, there is little hope for financial stability absent a revised funding model. The system now seems to be functioning on a day-to-day mindset, struggling to maintain operations let alone catch up on chronic underinvestment. The Metro shares with India an undue focus on the present. In Kolkata, the frantic rush to completion before elections backfired. Future risks did not matter, until they became present. In Washington, future infrastructure decay arrived more slowly, but is now imposing detrimental consequences.

Like the United States and India, Nepal faces a crisis in transportation infrastructure. The government is moving ahead with plans for an international airport in the Indian border region 130km south of Kathmandu. The government recently rejected an offer by India to build the airport, in a move that would appear to divert already scarce domestic resources away from upgrading or replacing Kathmandu’s maligned Tribhuvan International Airport. India and China have a history of offering assistance in building Nepal’s infrastructure. $1 billion in concessional loans were offered by Indian Prime Minister Modi before the 2015 earthquake. In March, Nepal and China agreed on a rail project, potentially reducing landlocked Nepal’s near exclusive reliance on India for access to international trade. China is also funding and building an international airport in Pokhara, a resort town in western Nepal.

While Nepal’s rejection of India’s airport offer is likely unconnected with the Kolkata disaster, Nepal should be judicious about partnerships. The bridge collapse and similar incidents erode India’s credibility, while China seems—despite growing pains—capable of quickly developing infrastructure of durable standard. Strengthened relationships with competent neighbours not only facilitate access to capital, but may also ensure higher standards for design and construction—an urgent issue as slapdash building methods and lax regulations were cited for widespread structural failures during the 2015 earthquake. A culture of tighter oversight should pervade Nepal’s coming development projects, in both earthquake recovery and transport connectivity.

Nepal should seek to avoid the path of India, which suffers from what a government committee in 2011 called a “massive infrastructure deficit in the urban sector.” Even if overpasses stand firm, airports sparkle, and metro systems hum on schedule, how long will they last? What is the life cycle of India’s new urban infrastructure, and what has been secretly compromised in construction and planning processes? Are India’s leaders and contractors “building to last?” In many cases, America has failed this standard. A decrepit Metro system, collapsed bridges in Minneapolis and Cincinnati, contaminated water in Michigan, and an outdated major airport in New York (LaGuardia) speak of cut corners and deferred sacrifice. Sports arenas seem to be the only quality public infrastructure, a perplexing reality in a society obsessed with entertainment. America’s airports and highways were once paragons of developed world progress, but chronic mismanagement has left many in shambles. Indeed, the longstanding business mindset of manage-for-now has invaded governance. India has a dwindling opportunity to avoid this fate, but there is little hope. In the meantime, watch your step—above ground and below it.

Asit K. Biswas is Distinguished Visiting Professor at the Lee Kuan Yew School of Public Policy, National University of Singapore; Kris Hartley is a doctoral candidate at the same school.