State stalling over the last 20 years robs the city of softer options and time. 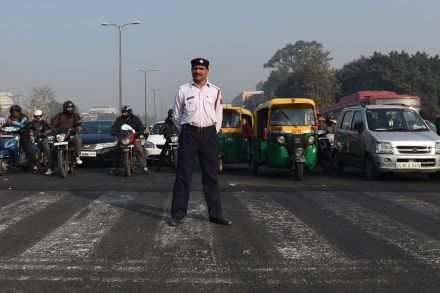 While the world castigates Beijing for its polluted skies, Delhi has quietly stolen that crown. It was named the world’s most polluted city by the WHO in 2014, which still stoked denials and protests from its officials. PHOTO: AFP

WHEN India became independent in 1947, Delhi had a population of 0.7 million. The city thereafter witnessed explosive growth. By 1950, the population had doubled to about 1.4 million. By 1986, less than four decades after the country’s independence, Delhi’s population had increased 10-fold. By 1997, the increase was 15 times, and, in 2015, it had an estimated population of 18.6 million, making it the fifth most populated city in the world.

The situation becomes even more dire if the urban agglomeration of Delhi is considered. In 2014, the United Nations estimated that Tokyo was the largest urban agglomeration of the world, with 38 million inhabitants, followed by Delhi with 25 million. In other words, Tokyo had 50 per cent more people than Delhi did.

The phenomenal growth in population in Delhi since 1947, accompanied by equally exponential increase in human activities, plus the fact that this growth has been poorly managed, have meant that Delhi is paying the economic, social and environment costs of its mismanagement and bad planning. Provision of basic and essential services such as health care, education, electricity, public transportation, water, waste-water collection and treatment and solid-waste disposal have fallen far behind what is desirable, or even sometimes minimally required, for livability.

Absence of essential infrastructure such as housing, transportation, communication, water and waste-water treatment plants, as well as lack of adequate land-use planning regulations and their enforcement; institutional and administrative inefficiencies; pervasive corruption, dearth of long-term visions by politicians and bureaucrats, populist and ad-hoc policies and rent-seeking practices of both the public and private sectors have steadily deteriorated the quality of life, environment and social conditions and the moral fabric of the city.

Sadly, both the central and the state governments have not done their jobs for decades. Politicians and bureaucrats have been too afraid to take the right decisions, even though the actions, had they been taken in time, would have significantly benefited the population of Delhi.

During the post-1990 period, the air quality in Delhi was poor. However, neither the politicians nor the bureaucrats had the courage or vision to take some hard decisions. In response to a writ petition filed by public-interest lawyer MC Mehta, the Supreme Court of India gave a landmark judgement on July 20, 1998. Among its many requirements were that the number of buses be increased to 10,000 by April 1, 2001, and the entire city bus fleet be converted to compressed natural gas (CNG).

Not surprisingly, both the government and public sector dragged their feet to implement the order. Five days before the order was to kick in, the Supreme Court noted that “due to lack of effective action taken by the private bus operators and also the government authorities”, urban chaos may follow.

On April 4, 2001, the Court was distressed to see reports in the media about the “defiant attitude” on the part of the Delhi administration to comply with the Court’s orders, which the Court deemed “wholly objectionable and not acceptable”. In other words, the Court had basically issued a contempt notice on the government.

There is no question that there was an “attitude” problem with the Delhi administration. Had the Court not taken a strong stand, the order would have been extensively diluted.

The Supreme Court intervention significantly improved the air quality of Delhi. But instead of taking advantage of this improvement to then formulate and implement a long-term air-quality management strategy, the central and Delhi authorities basically ignored the problem.

Fast forward a decade and air quality in Delhi has worsened to what it was when the Supreme Court took its decision in 1998, as a result of the exponential increase in population, economic activity and traffic.

In 2014, when WHO reported that Delhi has the highest level of air pollution of any city in the world – even worse than Beijing – the officials bristled and responded that the UN Agency had overestimated the pollution levels in the capital. The member-secretary of Central Pollution Control Board said: “Delhi is not the dirtiest… certainly it is not that dangerous as projected.”

The US Embassy in Delhi now routinely publishes air quality index over its compounds. Many Indians trust this index more than those available officially.

As the number of middle-class, educated people has grown significantly in Delhi and because of communication and information revolution, people have become aware of the health costs of air pollution. Politicians and bureaucrats are now under tremendous pressure to improve the city’s air quality. However, decades of inaction and neglect have meant that Delhi has run out of any soft and easy options, and also time.

In terms of health impact, an epidemiological study carried out by the Central Pollution Control Board and Chittaranjan National Cancer Institute of Kolkata on 11,628 children from 36 Delhi schools found that every third child had impaired lung function. A 2010 study by Boston Health Effect Institute estimated at least 3,000 annual premature deaths were occurring in Delhi due to air pollution. Even President Barack Obama’s three-day visit to Delhi in January 2015 was estimated to have reduced his lifespan by six hours from inhaling the world’s most toxic air.

Efforts such as the latest licence-plate rationing system have attracted considerable media attention. This may divert public attention on air pollution temporarily, but by itself will not contribute to any perceptible long-term improvement in air quality.

Delhi now has more vehicles than three other Indian megacities – Chennai, Kolkata and Mumbai – put together. It is adding some 1,400 new vehicles to its roads every day. It is a safe bet that within the next few months, if the licence-plate rationing system continues, there will be a thriving black market in these plates. As it marches towards being the unstoppable, most populous agglomeration of the world in about a decade, it needs many hard decisions which the politicians are still loathe to make.

Unfortunately, Delhiites will continue to pay serious health and environmental costs for the inaction of its past governments, and inadequate policy responses of its current and future governments, for at least the next decade.