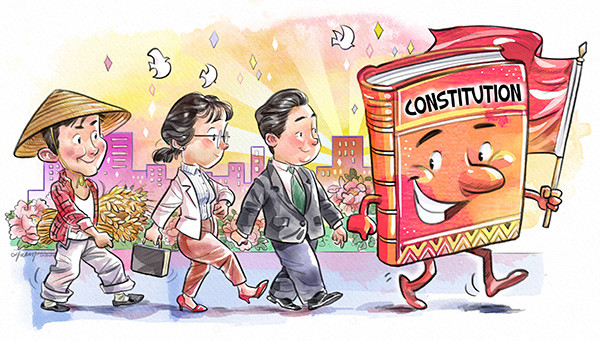 Building a beautiful China and an ecological civilization has been written into the country’s Constitution to reconcile economic development and ecological protection, fill the gaps in terms of environmental governance and comply with people’s aspirations and wishes. The move was in response to serious air, water and air pollution that affected China because of rapid economic growth.

Acutely aware of the serious environmental problems caused by breakneck industrialization, the Chinese government has been putting in place increasingly stricter environmental protection measures to improve people’s life and health, and protect the ecosystems.

Industrial development and widespread use of coal for power generation and heating have resulted in heavy air pollution. Unregulated industrial (including mining) and domestic discharges have contaminated the soil and water bodies in many areas. In 2014, the Ministry of Environmental Protection said 16.1 percent of China’s productive soil was polluted.

The latest plan announced is expected to ensure steady economic growth continues, so as to lift millions of Chinese people out of poverty. Action plans for prevention and control of soil, water and air pollution have also been prepared as integral components of this ambitious but implementable vision.

Since a beautiful China cannot be built overnight, targets have been set for 2020 and 2030, and the results will be regularly monitored and assessed to ensure the process progresses smoothly. And officials will be made accountable for their environmental actions and decisions.

The latest plan is an important shift in the country’s development paradigm, which will help build a prosperous and beautiful China. This includes new ways of generating energy, and managing air, water and soil to progressively reduce pollution levels.

A greener development model will include generating hydropower, and harnessing wind and solar power to produce energy, and steadily decreasing the use of coal. Policies will be backed by strict regulations and enforcement, actions that were mostly missing in the past.

China has been pursuing green development for some years now. For example, by 2015, it had already installed almost half of the world’s added wind power. And in 20 years, it is expected to lead the world in the use of renewable sources of energy, fast transition to electric vehicles, and tougher rules and regulations for controlling the harmful effects of industrialization on the environment.

Recent attempts to reduce air pollution in Beijing have been successful. In January, the government reported that the levels of PM 2.5, one of the most dangerous air pollutants, had dropped to 34 micrograms per cubic meter, nearly one-third less than the level five years ago. In 2013, when the government announced that the PM 2.5 target for 2018 will be less than 60 microgram per cubic meter, even many Chinese people, let alone foreigners, considered it to be too ambitious and thus unachievable. But thanks to good planning and determined implementation, the target has been achieved.

Just like China’s economic development over the past four decades has been unprecedented, the country will make good progress in controlling environmental pollution－much faster than any developed country has managed over the past century－which will pave the way for building an ecological civilization and a beautiful China.

Cecilia Tortajada is a senior research fellow at the Institute of Water Policy, Lee Kuan Yew School of Public Policy, National University of Singapore, and editor-in-chief of the International Journal of Water Resources Development. Asit K. Biswas is a distinguished visiting professor at the same school.