Backed by phenomenal economic growth, China has its ‘panda diplomacy’, Xi’s growing voice in global affairs and a flow of higher-education students into and out of China are powering this. 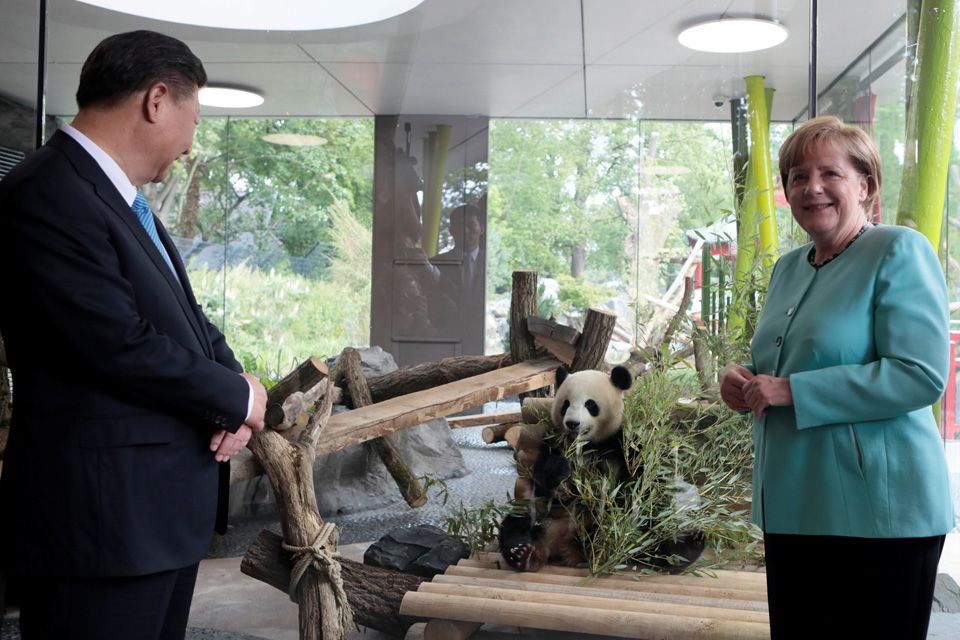 German Chancellor Angela Merkel and Chinese President Xi Jinping at a welcome ceremony last July for pandas Meng Meng and Jiao Qing, which are on loan from China to Berlin’s Tierpark Zoo for 15 years. Mrs Merkel referred to them as ‘two very pleasant diplomats’. PHOTO: REUTERS

THE importance of soft power has been known for centuries, but the term was coined by Joseph Nye only in the late 1980s. Countries have used both soft and hard power for centuries.

Soft power is the ability of a country to shape other countries’ views, attitudes, perceptions and actions without force or coercion. The soft power of a country is dependent on many factors, including its performance, global image and international reputation. Exercising soft power, a state can attract supporters and partners towards its policies, views and actions.

It is often believed—erroneously—that China is a relative latecomer to soft power. China has exercised soft power in different ways than the West. Its methods have thus been often missed by Western experts, but China has historically influenced large parts of Asia through culture, knowledge and trade.

The country’s giant pandas, symbols of China’s efforts at wildlife preservation and environmental protection and of its caring and genial approach and culture, are an example of its soft power.

In 685 AD, Empress Wu Zetian of Tang Dynasty presented two giant pandas to the Japanese emperor. More than a millennium later, in 1941, Chiang Kai-Shek gifted another pair to the Bronx Zoo in appreciation of war-time help from USA.

The two leaders, Xi Jinping and Angela Merkel, opened a US$10 million Chinese compound specifically for the pair before the G20 meeting in Hamburg. Chancellor Merkel said of the two pandas: “We have worked very hard over the past year in the G20 framework and we have now two very pleasant diplomats here.”

In contrast to US President Donald Trump’s strident diplomacy of “America First”, China has been projecting itself as a friendly, cooperative and generous country, enhancing its soft power. Soft power has become an important objective during the past decade. In 2007, President Hu Jintao declared that the country must “enhance culture as part of its soft power”. In 2014, President Xi Jinping said: “We should increase China’s soft power, give a good Chinese narrative, and better communicate China’s message to the world.” He followed this up with a powerful speech during 19th National Congress. In October 2017, he proposed a “socialism with Chinese characteristics for a new era” and “realisation of the Chinese dream of national rejuvenation”.

This, he proclaimed, will offer “a new option for other countries and nations who want to speed up their development while preserving their independence; and it offers Chinese wisdom and a Chinese approach to solving the problems of the mankind”.

Among the goals for the period 2020 to 2035, he outlined steps to be taken to enhance China’s soft power, and greater appeal to its culture. “We will improve our capacity for engaging in international communication so as to tell China’s stories well, present a true, multi-dimensional and panoramic view of China, and enhance our country’s soft power.”

China has accumulated considerable soft power through its long history, culture and philosophy. These have been complemented by its phenomenal economic growth over the past three decades, unparalleled in entire human history.

In 1980, its per capita gross domestic product (GDP) in purchasing power parity terms was US$310. The figure has been expeted to hit US$16,624 for 2017 – an increase of 53.6 times in only 37 years. During this period, 800 million people moved out of poverty; the world’s millennium development goals would not have been met without China’s performance.

In addition to infrastructure, China is playing major roles in other areas. Consider research and development (R&D). The United Nations Educational, Scientific and Cultural Organization (Unesco) said the share of global R&D expenditure of high-income countries fell from 88 per cent to 69.3 per cent beween 1996 and 2013. China alone filled this gap, increasing its share from a paltry 2.5 per cent to 19.6 per cent in those 17 years. Recently, China’s average annual R&D expenditure growth has been 18.3 per cent, compared to an anaemic growth rate in upper- and middle-income countries of 1.4 per cent.

Increased educational and research activities have ensured that the number of foreign students in China are increasing rapidly. In 2016, China had 442,431 international students, a 35 per cent increase over 2012. China now ranks third in attracting foreign students after USA and UK, with 11 per cent growth in 2016 over 2015. With increasing global rankings of Chinese universities, their rapid internationalisation, policies encouraging foreign students to study in China, and affordability of study and living costs compared to the West, China will soon become the top destination for international students.

Of the five million international students pursuing higher education courses outside their countries, nearly a quarter are Chinese. In 2016, American universities attracted 330,000 Chinese students, followed by 166,000 from India. Increasing numbers of Chinese students abroad and foreign students in China will further enhance its soft power.

China’s economic success, massive infrastructural development, academic and research progress, cultural heritage and success in sports will continue to increase its soft power in the future. In contrast, the American soft power is now in retreat with its America first, anti-globalisation, anti-immigration, isolationism, anti-trade and anti-environmental policies. Policy differences between the two economic superpowers are now stark.

China will further increase its soft power through forward-looking actions and investments under One Belt, One Road (OBOR), New Maritime Silk Road, the coordinated development of the Beijing-Tianjin-Hebei region, Yangtze economic belt, as well as through establishment of the Asian Infrastructure Investment Bank and the New Development Bank.

Mr Xi’s message to the world is that a new approach is needed, which would facilitate “state-to-state relations with communication, not confrontation, with partnership and not alliance”.

During the Asia-Pacific Economic Cooperation Summit in Vietnam last November, Mr Trump reconfirmed his “America-First” policy; America will pursue only bilateral trade agreements that are “fair” and “reciprocal”. He did not address who will define what is fair. For a transactional, zero-sum and “America-First” president, multilateral trade agreements do not work, nor does World Trade Organization. These will further decrease America’s soft power, and China is stepping in to fill the gap.

In Vietnam, Mr Xi became the new champion of globalisation and free trade. He noted globalisation is an “irreversible historical trend”, and championed multilateral trade. “We should uphold multilateralism, pursue shared growth through consultation and collaboration, forge and build shared future for mankind.” He spoke of the digital economy, artificial intelligence and quantum science. He presented a vision of the future that is interconnected, comprehensive and win-win for all countries. He said development is a journey with no end, and invited “more countries to ride the fast train of Chinese development”.

The asymmetry of views between the leaders of the two soft powers has made Mr Xi the poster child for globalisation, free trade and international cooperation.

China’s soft power is likely to increase significantly during the coming decades. However, it will depend on many imponderables, including how the country handles the current South China Sea disputes and border issues with its neighbours, continues its rapid economic growth, finds solutions to its extensive environmental pollution problems, how it performs at various UN and other international fora, and how it handles climate change mitigation, and hosts other events.

This article was published by THE BUSINESS TIMES, January 25, 2018.