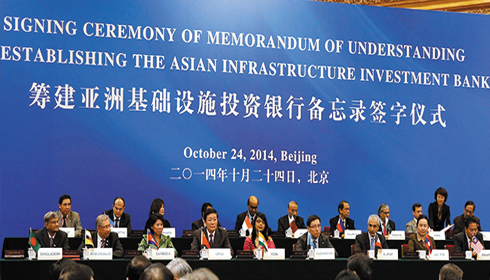 On 21st October, twenty-one Asian countries become founding members of the China-led Asian Infrastructure Investment Bank (AIIB), including India and Malaysia. It will start functioning formally in late 2015. The authorized capital will be US$100 billion, and the initial subscribed capital will be around $50 million. The headquarters of the Bank will be in Beijing, with Jin Liqun, Finance Vice-Minister of China, as its head. China will be the largest shareholder, followed by India.

The need for an infrastructure bank is beyond doubt. According to ADB, investments required in Asian developing countries during 2010-2020 period is $8 trillion, or $800 billion per year. ADB only lends about 1.5% of this amount.

The new Bank has seriously ruffled the feathers of the US and the Japanese Governments. It has also disturbed the cosy and smug world of the World Bank and ADB.

This is not surprising. Two international financing institutions, World Bank and International Monetary Fund (IMF), were created 70 years ago. Each member country received a quota depending on that country’s share of global economy as measured by GDP. This quota represented the country’s voting power.

Over the past seven decades, world has changed remarkably, but the governance in these two institutions have not. China is now a bigger economy than France, Germany and Italy combined. Its voting power is 5%, even though it accounts for nearly 10% of the global GDP. US has 17% voting power, which allows it to block any reform since any reform requires 85% majority.

There is a democratic deficit in the governance of these organizations. G20 Finance Ministers agreed in 2010 to rectify this situation. The reform proposal was based on the size of the country’s economy at the end of 2008. It would have doubled the IMF capital to $720 billion, and transferred 6% of voting power to the emerging powers.

The US Congress has failed to ratify this revision because it may reduce its influence on the two institutions. However, even after this revision US would have maintained its veto power. Furthermore, the Chinese economy now is now nearly twice of what it was by 2008.

Unwilling to accept continuing Western domination, and answering to the critics, especially the United States, who have long argued that China should assume greater global responsibilities in areas like climate change and arms proliferation, President Xi Jingping surprised his Indonesian hosts during a State visit by announcing the formation of AIIB.

From a Chinese viewpoint such a Bank makes eminent sense. A major feature of China’s miraculous economic progress was its emphasis on infrastructure. During 1992-2011, China spent nearly 8.5% of its GDP on infrastructure: corresponding figures for other Asian countries were between 2-4%.

For China, the Bank will serve at least five objectives. First, it could invest part of its foreign reserves of $3.9 trillion on commercial terms rather than putting them in US treasuries where the real value is declining. Second, it will help in internationalising of yuan. Third, it would secure contracts for Chinese firms and thus boost employment opportunities. Fourth, China has funded numerous infrastructure projects from other national sources. Some of these projects have created local resentments. These will be much less when the funds come from a regional multinational bank. Finally, it will boost China’s global influence and significantly enhance its soft power.

The proposal was badly received by the United States, Japan and ADB, three parties that are likely to lose some power. This may be compounded when the new BRICs bank starts operating in Shanghai. Tokyo and Washington have worked in tandem to maintain their power structure in the 67-member ADB. China is now Asia’s largest economic power. Yet, US and Japan hold 15.7% of votes, but China only 6.57%.

US has successfully lobbied its close allies, Australia and South Korea, not to join the AIIB basically to curtail China’s increasing soft power and economic influence.

Australia, South Korea and Indonesia will finally decide whether to join based on their national interests. China is one of their largest trading partners.

ADB and some Washington figures have questioned the likely governance practices of the Bank, including upholding good social, environmental and labour conditions, transparency, and sound economic principles. These are red herrings.

AIIB is a new southern alternative to traditional sources of international development funding. Properly managed, it should avoid the mistakes of World Bank and ADB. It could reflect broader and more appropriate mandates, and adopt better governance practices. It would not be bound by tradition or historical precedents and may even develop new and more effective financing mechanisms.

No country can beat China’s experience in infrastructure. China Development Bank’s commercial infrastructure loan is now far bigger than those of the World Bank and ADB combined. This has occurred only within the last 20 years. Fred Hochberg, Chairman of the US Export-Import Bank, notes his Bank extended $590 billion in loans and guarantee over its entire 80-year of history. In contrast, the Chinese institutions have provided $670 billion in only during the last two years. Skeptics are underestimating and misrepresenting the Chinese knowledge and experience.

AIIB will be a formidable competitor to the World Bank and ADB. It will shake up their current modus operandi and will force them to rethink some of their unnecessary lending restrictions and streamline their project preparation and approval processes. The impact on the weaker bank, ADB, is likely to be significant. It does not have same degree of expertise and intellectual prowess as the World Bank. Some of its thinking, for example in the water area, is at least 15 years behind time. Unless it can radically improve its performance, it would be increasingly marginalized by AIIB and the proposed BRICs bank.

AIIB is likely to have positive impacts. It will provide a new source of funding in Asia. For China it will enhance its soft power and bring considerable economic benefits. The competition will force ADB and the World Bank to undertake serious reforms that are long overdue.