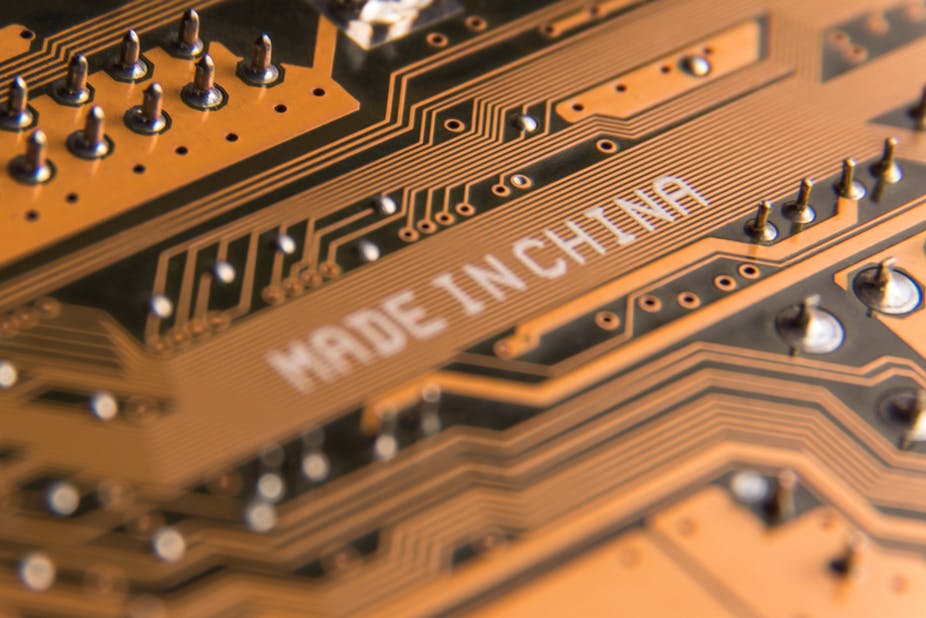 China has its eye on technological dominance. ROMSVETNIK/Shutterstock

In the last 50 years, China has experienced rapid economic transformation. It is now poised to assume membership among the world’s most developed economies. Its strategies on issues like urbanisation and infrastructure are widely studied and occasionally copied.

What is the next step on the growth ladder for the Asian giant? Evidence suggests that the answer lies with smart technology, particularly for urban and environmental management. Technology is playing an instrumental role in China’s modernisation efforts. This is true across a variety of domains including industrial upgrades, public service delivery, and environmental monitoring and management. It is plausible, then, that the country will connect its growing technological prowess with its global leadership ambitions.

Green technology offers a particularly promising avenue for global influence. China has already staked a claim to global leadership in solar technology. Its domestic industry is prodigious and innovative. The country is taking bold strides to do even more. A proposed global power grid, estimated to cost a staggering USD$50 trillion, seeks to connect solar and wind power infrastructure around the world.

According to the United Nations’ Environment Programme China’s investments in renewable energy topped USD$78.3 billion in 2017. Most of this was made up of government and corporate research and development. This far outpaced the US’s investment in the same year of USD$46.4 billion.

Now China must deliver both the innovation and scale to bring grand proposals like the global power grid to fruition. It must also navigate the modern era’ increasingly tense geopolitics. This is an important moment to put both its technological and diplomatic skills on display in its quest for superpower status.

China has focused on several elements of technology in recent decades. These include urban systems, artificial intelligence and transport. One celebrated example is the country’s push for 500 cities to adopt “smart city” initiatives of varying sorts. These include “internet highways” and self-service hospitals.

Another example is Shenzhen’s fleet of electric buses. It’s almost triple the size of New York City’s fleet – conventionally powered or otherwise. The electrification of Shenzhen’s taxi fleet is next on the agenda.

In a 2016 speech, the then-chairman of China’s State Grid Corp Liu Zhenya stated that upon the completion of the global energy grid project

… our world will turn into a peaceful and harmonious global village, a community of common destiny for all mankind with sufficient energy, blue skies and green land.

Cynics may bristle at such idealism. But despite its hyperbole, this comment shows how far China’s vision for global leadership has evolved. When an emerging superpower – with the world’s largest population and, soon, the world’s largest economy – makes declarations about its global ambitions, the rest of the world scoffs at its own peril.

Becoming a global leader in solar and other green energy sources comes with great responsibilities. China will need to balance the rapid expansion of productive capacity with environmental stewardship. For example, the negative peripheral effects of solar manufacturing require tighter regulatory control.

Investment in cleaner production systems is also crucial – not only for the health of China’s citizens but also as a model of sustainability for the world.

Looking to a global future

China’s long-run investment perspective and bold capital outlays in the areas of technology, energy, environment, and transport have the potential to define the global future in the way Britain’s industrial revolution did two centuries ago.

The variety and complexity of such projects can generate spin-off technologies that drive global-scale innovations in other fields, in the same way the US’s space exploration led to the transformation of technology for health and medicine, transportation, agriculture, and security.

China has exhibited a pragmatic approach in overcoming domestic economic development challenges in recent decades. The country’s economic reforms, beginning in 1978, embraced market liberalisation as a substitute for the ideology of central planning. The reforms included investment in infrastructure, education and industrial capacity. This generated substantial negative impacts, including environmental degradation. But there is evidence that China is committed to improving conditions.

One notable example is recent progress clearing the air in Beijing. China should now embrace the same pragmatism in applying technology to global challenges in an inclusive and sustainable fashion.

This article was published by THE CONVERSATION, May 9, 2018.