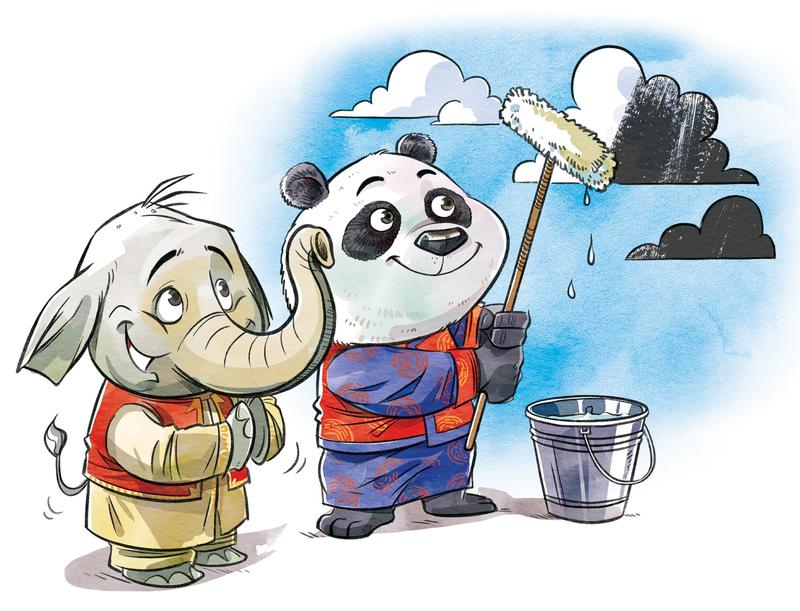 The air pollution crisis in Delhi took a serious turn in early December when an international cricket match between India and Sri Lanka had to be suspended due to poor air quality. This happened after schools were ordered to close and many flights were cancelled amid a spate of highway accidents caused by the low visibility. Such was the condition in India’s National Capital Region, which covers Delhi, and parts of Uttar Pradesh and Haryana provinces, that Delhi’s chief minister described the beleaguered city as a “gas chamber”.

Delhi’s air pollution is getting worse by the year and yet there are no signs that either the central or Delhi government has any policy that could ameliorate the problem.

India’s National Capital Region with more than 20 million residents is overpowered by industrial emissions and fumes from over 10 million vehicles. Thirteen coal-fired power plants operate within a 300-kilometer radius of Delhi. The number of new vehicles registered in 2015-16 was 877,000, an astronomical increase of 64 percent over the 2014-15 figures.

The problem is magnified in winter, when the National Capital Region’s already poor air quality is further degraded by smoke from burning stubble in the neighboring agricultural provinces of Haryana, Punjab and Uttar Pradesh. As a measure of airborne pollutants, the air quality index recently reached 999 in some parts of Delhi, literally off the charts of maximum measurement thresholds.

While media attention has focused primarily on urban pollution, India’s crisis is a regional phenomenon. Ad-hoc corrective actions are failing to produce any durable results. Temporary solutions include short-term restrictions on construction and high-emissions industrial activity, and sprinkling water in severely affected areas. Plans for driving restrictions based on license plate numbering were recently abandoned after India’s National Green Tribunal, which addresses environmental issues, objected to provisions for exemptions. The government’s continued inability to respond to the crisis is forcing citizens to find their own costly but imperfect solutions, such as facial masks and indoor air filters.

Delhi’s smog crisis has shifted global attention away from Beijing, and rightly so, because China’s capital has taken long-term, fruitful measures to address the problem which have already yielded positive results. According to World Health Organization data, 10 of the world’s 20 most polluted cities are in India, compared with only three in China. While the two countries top the ignoble list of deaths related to air pollution (with more than 1 million each in 2015), Delhi’s crisis is worsening while the situation in Beijing appears to be improving.

China is adopting a systematic and coordinated approach to reducing air pollution, through a host of policies that promote alternative energy and punish regulatory breaches. The country is closing coal-fired power plants, reducing steel production and encouraging green investment. It has also increased inspections and spot-checks on polluters. In Beijing alone, fines for pollution topped US$28 million in 2015. To combat vehicle exhaust, which is responsible for one-third of Beijing’s emissions, a car quota of 150,000 was set for 2017, with 60,000 allotted to fuel-efficient cars. This will be further reduced to 100,000 a year during 2018-20 to keep the total number of cars around 6.3 million. Beijing is also aiming to reduce coal consumption from the current 11 million tons per year to less than 5 million by 2020.

India is failing by comparison, and the country’s political system is making regional air pollution a nearly intractable problem. Although Haryana and Punjab banned agricultural stubble burning in 2013 at the behest of the National Green Tribunal, implementation has predictably lagged.

Furthermore, policy coordination is weak across provinces governed by rival political parties. For example, the leaders of Delhi and Haryana have publicly clashed over which province is primarily responsible for the pollution. Farmers constitute a significant voting base in Haryana and Punjab, prompting provincial governments to demand compensation from the central government for losses that farmers incur by ceasing to burn stubbles.

In contrast, the Chinese government plans to reduce air pollution by 15 percent in much of North China this winter.

Another difference between India and China is the level of apathy among the government and general public. In China, years of seething public complaint prompted Premier Li Keqiang to “declare war” on pollution in 2014. In India, the central government has remained largely silent about pollution while provincial leaders indulge in meaningless interparty squabbling. Public outrage over air pollution is still “seasonal” and rarely goes beyond news and social media. The central government’s business-friendly policies in India, such as relaxing rules for construction sites, have made the problem even worse.

Amid the discouraging leadership vacuum at local and regional levels, India’s Supreme Court recently assumed the mantle of leadership on air pollution, banning fireworks in the NCR and pushing for response-focused action planning. While these are encouraging steps for India, China’s policies reflect a more robust and informed view of combating air pollution as a regional problem. The results are becoming evident. In the Beijing-Tianjin-Hebei region, PM 2.5 levels decreased by 27 percent between 2013 and 2016.

India has lifted millions of people out of poverty in recent years. It aspires to be an economic superpower. Yet it has singularly failed to curb air and water pollution over the past several decades. If India is serious about reducing air pollution to acceptable levels, the central government must intervene to coordinate action among provinces and hold all officials accountable for inaction. It should also strengthen province-level initiatives to minimize stubble and coal burning, and promote sustainable farming.

More broadly, perhaps it’s time to ask whether highly argumentative democratic models are always the best solution for problems that transcend city and provincial boundaries. India must find a way to rise above politics in solving environmental challenges, or else the country will bicker its way into smoggy irrelevance.

Asit K. Biswas is a distinguished visiting professor at the Lee Kuan Yew School of Public Policy, National University of Singapore, and Kris Hartley is a lecturer in Public Policy at the University of Melbourne and a non-resident fellow at the Chicago Council on Global Affairs.

This article was published by CHINA DAILY, February 8, 2018.