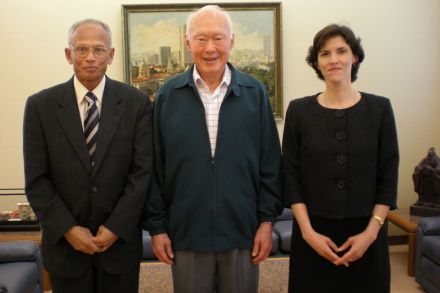 Politicians and diplomats often have the habit of obfuscating complex or politically sensitive questions, but not Mr Lee, who answered all the questions directly and fully, say Prof Biswas (left) and Dr Tortajada

Our paths crossed with that of former prime minister Lee Kuan Yew in most serendipitous ways. In 2005, our Third World Centre for Water Management was asked by the United Nations Development Programme to conduct 21 studies for the preparation of the 2006 Human Development Report on water. One of these studies was on the city that has one of the best, if not the best, water supply in the world. Dr Tortajada took charge of these studies.

We assessed numerous water utilities all over the world, including London, Paris, Berlin, Copenhagen, New York, Los Angeles, Tokyo and several others. Then a friend suggested we should look at Singapore, about which little was known then outside the city­state. He also warned that it may be difficult to get the necessary information from Singapore to make a realistic assessment.

We were working in Spain at the time. By searching the Internet, we found that Khoo Teng Chye was the chief executive of PUB. We wrote to him, told him about our study and that we would like to consider Singapore. However, we would need to analyse PUB’s performance and thus considerable data was needed urgently. Within four hours, we received a very supportive letter from Mr Khoo asking us for the type of data that was needed and also the deadline to provide it.

When we analysed the data, it was clear to us that PUB was an outstanding water utility and also one of the best in the world. Dr Tortajada wrote a report for UNDP pointing out the reasons why PUB’s performance was exemplary. One of the most impressive parts was Singapore’s marginal water cost pricing, the first country to follow this approach. Unknown to us, PUB had forwarded this analysis to Mr Lee.
In 2006, during a breakfast with Mr Khoo and his senior colleagues in Mexico City during the 3rd World Water Forum, we proposed that with a first­grade utility in Singapore, the city­state should consider transforming itself into a knowledge hub for water and this could be initiated by starting a Singapore International Water Week (SIWW) which could focus on the business of water and real solutions. Mr Khoo subsequently invited us to give a public lecture on our views on Singapore, where, in addition to SIWW and water hub, we proposed that the Lee Kuan Yew School of Public Policy could consider establishing an Institute of Water Policy with an Asia­centric focus since such a school did not exist in Asia and was much needed.
All these suggestions soon became a reality.

It is indeed absolutely remarkable that some two years later, and a tribute to his proverbial memory, Mr Lee remembered Dr Tortajada’s analysis in spite of thousands of issues and documents that must have passed his desk. At the first SIWW, in 2008, Mr Lee asked if he could meet Dr Tortajada for which he would arrive half an hour before his scheduled visit to discuss her analysis. This was our first interaction with him.
Later on, when we started writing the book, The Singapore Water Story, many questions had to be answered to understand why certain policy decisions were taken by Mr Lee. He graciously and promptly agreed to meet us and answer our questions.

Before our discussion, many of our Singaporean friends had warned us to go well prepared for the interview, since rumours had it that he had terminated several interviews because he considered them a waste of his time.

We arrived at his office with considerable trepidation, not knowing what to expect and how the interview would go. For the first five minutes, we were aware that we were in front of a remarkable person, a giant of his time, and were somewhat nervous as to how the entire discussion would go.

However, he very quickly put us completely at ease, and we totally forgot that we were in front of one of the major historical figures of our time. It became like a discussion with many other peers. He answered all the questions directly and fully. We discussed many issues and argued over some of them. It was a new experience for us, since in our extensive interactions with major political figures, we found many times that they did not want to answer sensitive questions directly. Politicians and diplomats often have the habit of obfuscating complex or politically sensitive questions, but not Mr Lee.

For many of the questions, he explained at length some of the politically sensitive issues that he had to consider. Only in one case, he felt the answer could still be politically sensitive. He told us that we needed to know the background as to why certain decisions were made so that we could understand the context, but that it was not for public consumption.

After 90 minutes of intensive and productive discussion, Mr Lee was tired. It was late in the day and he had been working all day. The gentleman that he was, he asked us when would it be “convenient” for us to return. We told him—any time, any day!

We turned up for the second round of discussions the following day but this time with a very different frame of mind, as if we were going to meet a very intelligent and remarkable old friend. We discussed the remaining issues for our book, and then moved on to discuss other issues, such as the development paths China and India had taken, problems they were facing and their future prospects. He expressed his views candidly and forthrightly, unlike nearly all politicians of his stature.

At the end of this second 90­minute discussion, we asked him if we could dedicate the book to him. With a twinkle in his eyes, he said we did not need anyone’s permission to dedicate a book. We told him that while this was true, we did not want him to be “embarrassed” by our book and the dedication. His prompt reaction was that he would be “honoured” by such a dedication.

When The Singapore Water Story was published, we invited him to be the chief guest for our book launch. He promptly accepted the invitation. However, he was unable to be present because of his health.

Contrary to much of what we had heard earlier, during our one­to­one discussion, we found Prime Minister Lee to be warm, friendly, candid and a person who was not afraid to answer forthrightly even the most politically sensitive questions.

It was Mr Lee’s continued strong political support and long­term vision that made Singapore’s water management what it is today—one of the very best in the world. We dedicated the book to him as a token of esteem for an eminent statesman and mark of true regard for his extraordinary achievements.

We shall always cherish our interactions with Mr Lee for his extraordinary effort and kindness to us. Requiescat in pace.