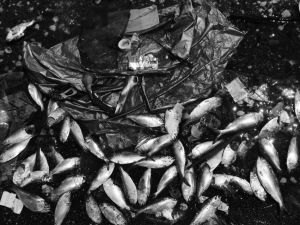 A major global concern at present is that the world will run out of water to meet the needs of its burgeoning population. Since water is needed for every aspect of life, the fear is that there will not be enough water for an estimated 9.3 billion people by 2050 and their numerous water-related needs.

However, the most pressing global water problem of the future will be water quality and not quantity. The quality of water is progressively deteriorating in nearly all the countries of the world.

Even in developed countries such as the United States and United Kingdom, the situations are not very rosy. According to the US Environment Protection Agency, 40 per cent of the surveyed rivers are not fit for swimming and fishing. It estimates 850 billion gallons of untreated discharges flow into water bodies annually, causing seven million illnesses each year.

In London, whenever there is more than 2mm of rain, untreated raw sewage flows into the River Thames. This occurs once a week. Each year, 30 million tonnes of raw sewage are discharged into the Thames.

The situation is significantly worse in emerging economies and developing countries, where all water bodies in or around urban centres are already heavily contaminated.

In China, water from more than half of its largest rivers and lakes has been declared to be unfit for human consumption. More than half of groundwater in northern China is so contaminated that it is not even fit for bathing, let alone drinking.

Or take Brazil. Its 380 sq km Guanabara Bay, where sailing events are to be held for the next Olympics Games, is now an open sewer.

It receives 8,200 litres of untreated sewage every second and 100 tonnes of garbage each day. The International Sailing Federation has said that all races at next year’s Olympics may have to be moved outside the Bay unless the pollution is cleaned up by 80 per cent.

Water quality affects the health of humans and global ecosystems. However, the world has been singularly unsuccessful in convincing policymakers that water quality improvements must be a priority policy issue.

Estimates made by the Third World Centre for Water Management indicate that only about 10 per cent of people in the developing world have access to good wastewater management, that is, wastewater from all households is collected, taken to treatment plants, treated properly and then discharged in an environmentally friendly way.

Sadly, the United Nations’ Millennium Development Goals have not addressed this issue and have instead focused on household sanitation.

In 1976, when I first proposed the International Drinking Water Supply and Sanitation Decade, it was with the aim of providing clean water to all people by 1990.

By clean water, I meant water that can be drunk without any health concerns. And by sanitation, I meant wastewater should be collected from houses, carried to a treatment plant, properly treated and then discharged safely to the environment.

However, this concept has been diluted by international organisations, which focus instead on “improved” sources of water and sanitation. For instance, the World Health Organization (WHO) and the United Nations Children’s Fund (UNICEF) define an “improved” drinking-water source as one that, by the nature of its construction and when properly used, adequately protects the source from outside contamination, particularly faecal matter. An “improved” sanitation facility is one that hygienically separates human excreta from human contact.

Sadly, these definitions sometimes have no relation to the quality of water. For example, if cement is poured around a well, it becomes an “improved source” of water, even if the quality within the well may have deteriorated significantly.

The WHO-UNICEF now claim only 748 million people do not have access to clean water. But other estimates by Aquafed (International Federation of Private Water Operators) and the Third World Centre for Water Management put this at closer to 3.5 billion people, based on the population of places where people do not dare drink water from the tap.

Singapore has shown that proper water quality management is possible. When Singapore became independent in 1965, the quality of available drinking water was poor. Every household had to boil water before drinking it for health reasons.

Fortunately, it had a visionary political leader in Mr Lee Kuan Yew who realised that water, both in terms of quality and quantity, is a strategic issue for Singapore’s survival and future development. Under his leadership, the quality of the nation’s water supply has leapfrogged even those of developed countries to become one of the best in the world.

The clean-up of the Singapore River and the Kallang River Basin more than 20 years ago has generated significant health, social and environmental benefits for the population.

Singapore’s experience shows that good urban water management in the developing world is possible. At present, all countries have enough knowledge, technology and investment funds to reduce the levels of water pollution significantly.

Advances have not been made because of public apathy as well as a lack of political will and sustained media scrutiny. People still have not fully appreciated the high costs of cumulative health, economic and social costs of increasing levels of water contamination.

This is now beginning to change. For example, there is growing awareness among people in Brazil, China and India that water pollution in these countries has gone out of control.

As the middle class in these countries grows exponentially, they are demanding better air and water quality. The onus is now on politicians and policymakers to listen and deal with the problems.

Asit K Biswas is distinguished visiting professor at the Lee Kuan Yew School of Public Policy. He is a recipient of the Stockholm Water Prize, which is considered to be the Nobel Prize for water.