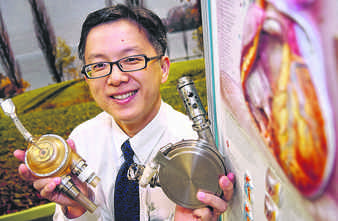 All heart: Thanks to Prof Caleb and his staff, the writer has hope of 10-15 more years of good quality life. ST FILE PHOTO

One of the stories that my schoolteacher told us when I was a kid made a profound impression. A very holy man used to live beside a river. One day, a constable on a horse arrived and informed him that a very big flood was coming and he had been instructed to evacuate him. The holy man told him that he was not going to move. All his life, God had looked after him and thus he would continue to stay in his house. The next day, the road was flooded and another person in a boat came to rescue him. The holy man would not budge and sent him away. The water continued to increase and the only place he could take sanctuary was on the roof. Finally, a helicopter arrived to rescue him. The man was stubborn, his faith was very strong and he refused to accept any help. Finally, a big wave came which swept away the holy man away and he was drowned.

When the holy man came face to face with God he asked why he was allowed to drown, and why God did not protect him since he had dedicated his life to His glory and followed His teachings. God then told him he wasn’t meant to die and that was why a horse, then a boat and finally a helicopter was sent to rescue him, all of which he had unwisely refused.

After many decades, this story came to my mind when, following a routine treadmill test, National University Hospital (NUH) decided to conduct additional procedures. After all these tests, my “constable” came in the person of Professor Michael Caleb. Prof Caleb is a very impressive person. Within the first three minutes, I was impressed by his professionalism, humility, courtesy and confidence. He answered all the questions my wife and I had candidly and precisely, and informed me that my main left artery was 80 per cent clogged. When I asked him what were the alternatives, he explained that basically there were two. First was to do nothing but no one could be sure when a major heart attack, including a stroke, might occur, or what the consequences could be. Second would be to do a heart bypass surgery which might give me 10 to 15 more years of good quality of life. He explained that the possibility of a major complication, including cardiac arrest during and immediately after the operation for a man with my conditions and age was about 4 per cent.

A no-brainer
After the operation, I would be in the intensive care unit (ICU) for two to four days, and then in a general ward for a further four to six days before being discharged to recover at home.

Dr Caleb wanted my wife and I to think about it and let him know what we would prefer.

As an adviser to 19 governments and several CEOs of Fortune 500 companies, I have to travel to all parts of the world. What flashed through my mind was that a major heart attack and a consequent stroke is dangerous even in a place like Singapore with excellent medical facilities – but what if it occurred in a country when I am there for work and where medical facilities are not as good as Singapore’s.

Thus, there was not much to think about the situation. I have already had more than 70 years of wonderful life. If for whatever reason I came within the 4 per cent fatality statistics, I would start my journey to the next world with a smile on my face! After this existential issue was settled, making the decision to go for a heart bypass surgery immediately was a no-brainer.

Next morning, I asked Dr Caleb to schedule a heart bypass surgery as soon as possible. My only requirement was that he should lead the surgical team. He scheduled the bypass surgery the following Wednesday.

I was asked to check in at the NUH on Tuesday night. I slept like a baby with no worries! I was told I would be taken to the operating theatre at around 7.00am. True to Singapore style, people came to take me to the operation theatre at about 6.40am! Since I was ready, I told my wife I might as well go to the theatre early. When I arrived there, Dr Caleb and his team were getting ready for the operation. He greeted us warmly. The staff told my wife not to worry and then suggested she should go home. It would take several hours, and they would inform her when the operation was about to be over.

My last recollection was around 6.55am. I do not recall anything till about 5.30pm, when I started to regain consciousness in the ICU. I vaguely recall having dreams and delusions, one leading to another smoothly. There was no pain but I had numerous tubes coming out of my body for drainage purposes.

When I awoke, I saw the smiling and relieved face of my wife. I was told that the first two days after the surgery are the most critical. Before this, I had never been in an ICU anywhere in the world. What I learnt was that, in an ICU, high-risk patients receive special attention. After the first two days, I was transferred to the “normal” section of ICU.

The nurses I had in ICU were truly excellent. I thought that I would have the same group of nurses looking after me. However, it appeared that the nurses were so rostered that no one looked after me for more than one shift. Nothing happens in Singapore without a good reason. There must be good reasons for this arrangement.

All the nurses I had at ICU for five days were invariably caring and competent. They came from several Asian countries: China, Malaysia, the Philippines and Singapore.

Dr Caleb had warned me that 30 per cent of bypass surgery patients develop problems with heart rhythm abnormalities which are usually benign and can be treated easily. I turned out to be one of those. As a result I had to stay two days longer in ICU. What was striking is that nurses did not know me before their shift. And yet, they were really concerned about my well-being.

Several nurses who had looked after me and then were rostered to look after others, came back to see me as to how I was doing, or simply to cheer me up, during their breaks, or after the end of their shifts. This is truly well and beyond their expected duties. As a professor myself, I have to grade all the nurses who looked after me A+ for their competence, caring and performance.

The doctors were equally competent and caring. There is no question that they worked long hours: I would guess that they were putting in about 50 hours of very stressful work a week. Any questions I had, they always took time to answer them.

Also impressive was the fact that Dr Caleb took some holidays when I was in the hospital. Even then, he telephoned his colleagues every day to see how I was, and discussed if any change of treatment was necessary. I take my hat off to Dr Caleb, his colleagues, and the ICU staff and nurses. As a university professor, I have to give my overall experience and the medical support I received an A+.

Lying on the bed at ICU and thereafter in the general ward, numerous thoughts came to my mind. First and foremost, thanks to Dr Caleb and others, I may have 10 to 15 more years of good quality life. I need to use them carefully, so that I can leave this world a little better than when I entered it. From now, any work I undertake must have a positive impact on society. I would not get involved in any activity, irrespective of how high profile or ego-satisfying it may be.

I also realised that for more than a decade I have been threatening my family to take them to Pago Pago for a holiday. As soon as I get a clean bill of health from Dr Caleb, I am taking them to Pago Pago, and no ifs and buts!

State-of-the-art
I had heard many comments about Singapore’s medical services, both pro and con. Having now had a personal experience with the system (at least NUH), I would say that the equipment they are using are state-of-the-art, certainly more up-to-date than I have seen in hospitals in Europe, Canada and Japan. Nurses are better trained and more caring. The doctors I came across were invariably dedicated and true professionals. In short, at least at NUH, one gets world class medical services.

There are many public policy issues in the area of health that Singapore will have to confront in the future, especially how the medical services will be paid for by the patients, especially in terms of equity considerations. What it does not have to worry about is that it already has a first-rate medical support system which all Singaporeans can be proud of and non-Singaporeans can use it with total confidence.