A call for more infrastructure

If India is to catch up with China by 2050, it needs to close the widening infrastructure gap between the two nations. 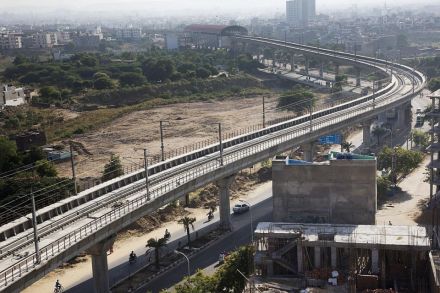 India is expected to have around 1.7 billion people by 2050. During the next four decades urbanisation in the country will increase, dietary patterns will change, requirements for all types of resources will accelerate, agricultural productivity will struggle to keep up with the food requirements of an increasingly affluent population, and people’s expectations for continually better standards and quality of life will increase steadily with time.

All these have to be met with the uncertainties imposed by many other complex and uncertain issues like fluctuations in economic growth, the magnitude and extent of climate change, social and political upheavals within and outside the country, extent of globalisation, free trade and their implications for the country, and steady advances in science and technology. The challenges ahead for the country are truly formidable, but so are the opportunities.

There is no question that to meet all these challenges successfully, India will not only need significantly more infrastructure but also better planning and management than available at present. If the infrastructural requirements cannot be met in a timely manner, the country will steadily fall behind other Asian countries such as China, Malaysia, Indonesia, Sri Lanka and Thailand which have developed, and are likely to continue to develop, their infrastructure at a faster rate than India.

Let’s compare the two Asian giants, India and China: in 1980, India had more roads, power and telecommunication facilities compared to China. A decade later, not only has China overtaken India but its infrastructural advantages have steadily grown and the gap between the two nations, steadily increased.

The infrastructural deficit is one of the main causes why India has been unable to develop labour-intensive manufacturing industries which could have provided employment opportunities for its millions of unskilled and semi-skilled workers as China has done. In 1980, China’s global market share was little over twice of India. Some 25 years later, this gap has increased to more than eight times. In addition, the quality of exported products of China now far exceeds India’s.

Let us review the present situation on how India fares in infrastructure in terms of global competitiveness. According to the latest 2013-2014 Global Competitiveness Report of the World Economic Forum, in terms of quality of overall infrastructure of 148 countries, India ranks 85, just above Indonesia. In contrast many other Asian developing countries have much higher ranking: Malaysia (29), China (48), Indonesia (61), and Sri Lanka (73). In specific areas of infrastructure, India’s ranking is somewhat similar.

In terms of quality of roads, its rank is 84; quality of air transport infrastructure, 61; quality of electricity supply, 111; active fixed telephone lines, 118; and mobile telephone subscriptions, 123. Only in quality of railroads infrastructure does it fare better, at number 19 – above the mean of 148 countries. Even in railroads, its competitiveness is below Malaysia’s (18) but above China’s (20).

Thus, if India is to successfully compete with other emerging Asian developing countries, its infrastructure development and management have to improve very, very substantially during the next decades.

THE CHALLENGES
India faces formidable development challenges up to 2050, when it is likely to have over 1.7 billion people, which will make it the most populated country in the world. Between 2010 and 2050, some 497 million people will move to urban areas. In contrast, China will add about 347 million. This means that India will have to provide development opportunities to more than 42 per cent of additional people compared to China.

In all areas of infrastructure, except railroads, India now fares much worse than China. Thus, if India is to catch up with China by 2050, it will not only have to close the existing infrastructure gap, but will have to provide for 42 per cent more urban people who are expected to move into urban areas compared to China. The competitive position will not get much easier because China is not going to sit idle.

In terms of electricity generation, a significant part of India not only has an erratic supply but the country also has a shortfall of 15 to 20 per cent in meeting the peak demand. This is in spite of the fact that some 350 to 400 million Indians do not have access to electricity.

In contrast, China has ensured that over 99 per cent of its population has access to electricity. In recent years, China has been adding each month nearly the total generating capacity of Bangladesh, a country with about 11 per cent of China’s population.

China comes out well above India in terms of all types of infrastructural development. Even then, it is still well behind the United States. For example, its current railway network is shorter than that of the United States’ during the 1880s. Around 85 Chinese cities with more than five million inhabitants still do not have a metro system. And as any recent visitor to Beijing or Shanghai will testify, the main roads appear to be permanently congested.

The infrastructure deficit in India has now become very significant, a serious constraint to development. In April 2013, Indian Finance Minister P Chidambaram noted that India had US$1 trillion in infrastructure deficit over the next five years. The country continues to have a high fiscal deficit; annual inflation has been consistently above 8.2 per cent since 2008; high public debt; poor infrastructure; rupee depreciation and high public subsidies in many sectors, especially food and energy. All these factors will make it very difficult to meet the budgeted fiscal deficit target of 4.1 per cent this year, while still providing adequate funding for new infrastructure projects. S&P now has a BBB- sovereign rating for the country, but has recently raised the outlook to stable from negative. The rating of BBB- is still only one grade above junk status.

During the past three decades China has consistently exceeded India each year in terms of infrastructure development. For example, during the years 1992-2011, China spent nearly 8.5 per cent of its gross domestic product on infrastructure. In comparison, India spent less than one-quarter of this amount.

Poor infrastructure, inappropriate policy frameworks, and wrong ideological biases have hindered inflows of foreign direct investments over the past several decades, part of which could have financed infrastructure deficits and improved supply chains. In addition, much of what has been invested has not been done properly because of poor planning and execution, and the absence of a culture of preventive maintenance, as in Singapore, and endemic corruption.

Cecilia Tortajada is a senior research fellow and Asit K Biswas is a distinguished visiting professor at Lee Kuan Yew School of Public Policy, Singapore. Both are co-founders of the Third World Centre for Water Management, Mexico.